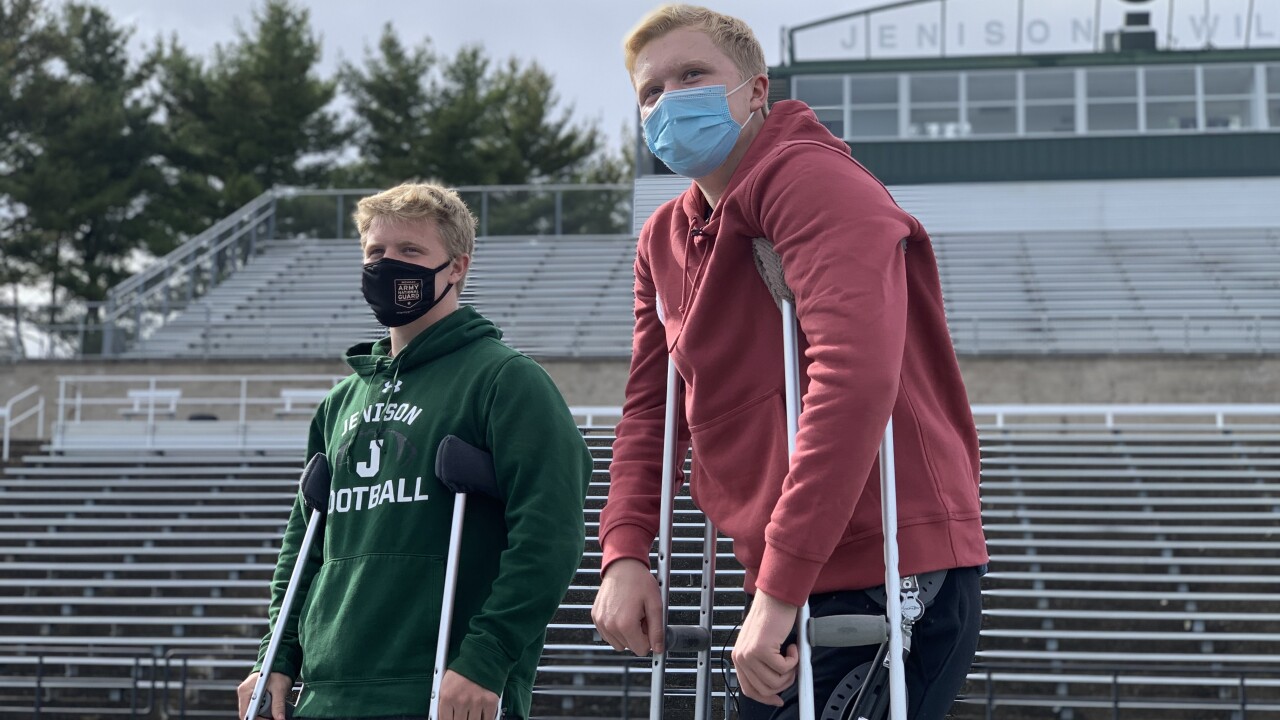 JENISON, Mich. — For the second consecutive season, the Jenison football team is without two outstanding players due to injury.

Despite the tough circumstances, they're both at practice helping out the team in anyway they can.

"It's his junior year and he's planning to have a great year, it's the first scrimmage of the year and he caught his foot in the turf," said head coach Rob Zeitman about Connor Flynn, "he looked at m and says, 'I tore my ACL.'"

Flynn worked hard over the next nine months to get healthy and return to the field.

"I made it back in about nine months," Flynn explained, "then the second practice back, I tore it again."

And Coach Zeitman vividly remembers the second Flynn went down this fall.

"Usually, you try to take the rest of the players to the other side of the field and keep them away from the injury," Zeitman said, "but practice just stopped, it was rough for everyone."

"I never thought about it happening again," said Flynn, "because that's not why you play, you play to compete. I was just out there competing, it happens."

And Flynn isn't the only player in the Jenison program missing a second consecutive season.

David VanBuren missed all of the 2019 campaign after hip surgery and now, he's missing time due to surgery on his opposite hip.

VanBuren says he has bad hips from growing too much and too quickly combined with being a catcher his whole life on the baseball field.

"He's six-foot-four," Zeitman said, "he was going to be a great weapon for us and was ready to go this fall."

After a torn labrum in 2019, doctors discovered his other labrum was severely damaged as well.

Surgery would lead to a six month recovery and after fall football was originally postponed by the MHSAA, he opted to have it done.

"David elected to have the surgery this fall so that he would be able to play spring football and spring baseball," said Zeitman.

"I didn't think three was any chance of football season coming back in the fall," VanBuren explained, "I had the surgery, was feeling good about it and literally had it that morning. Then, in the afternoon, they said 'okay, we're going to play,' and I get a text message saying football is back."

And VanBuren says it didn't really sink it at that moment.

"It didn't hit me, I was just confused, and then it all hit me later that week, it was terrible."

While the Jenison football program was ecstatic to be back on the field this fall, they also understood it would be without VanBuren.

"It was another gut wrenching blow to our football community," said Zeitman.

Now, Flynn and VanBuren are not only leaning upon each other, but the program as a whole, to help them through another difficult break.

"David and I grew up together," Flynn said, "we went to elementary together since second grade and we compete, that's what we're both doing to get through it, whether it's supposed to happen or not."

VanBuren is a talented baseball player for the Wildcats and is also hoping to play in college, he says football was always secondary but now, it has really set in how much he misses it.

"I haven't played a single down of varsity football," VanBuren said, "it's tough for me because I remember not wanting to go to football practice. Then once you have it taken away, you realize how much you value it."

While both players say it was very tough to accept, they've moved on from the injuries and are keeping positive attitudes.

"It could be a lot worse," Flynn said, citing former teammate, Andrew Medley's battle looking for a new kidney in 2019. "I could choose to quit, but it would be a disservice to all the people that have put time into me," he added.

And VanBuren is leaning upon his football coaches who he says have helped him get over a stressful couple of weeks.

"I know it's corny but all of the coaches always say it, you really have to value every minute because nothing is guaranteed," he said.

Flynn says he'll be stronger after going through the back-to-back injuries.

And he says the Jenison community, coaches, and his teammates have all helped him too much for him to quit.

"It might not be football, but I can compete. I have goals that I want to accomplish in life and I'm not going to let this hold me back."

VanBuren is expecting to make a full recovery and will be ready to play baseball by March while Flynn isn't ruling out a potential walk-on spot to play football in college.

The Wildcats will take on East Kentwood this Friday night.