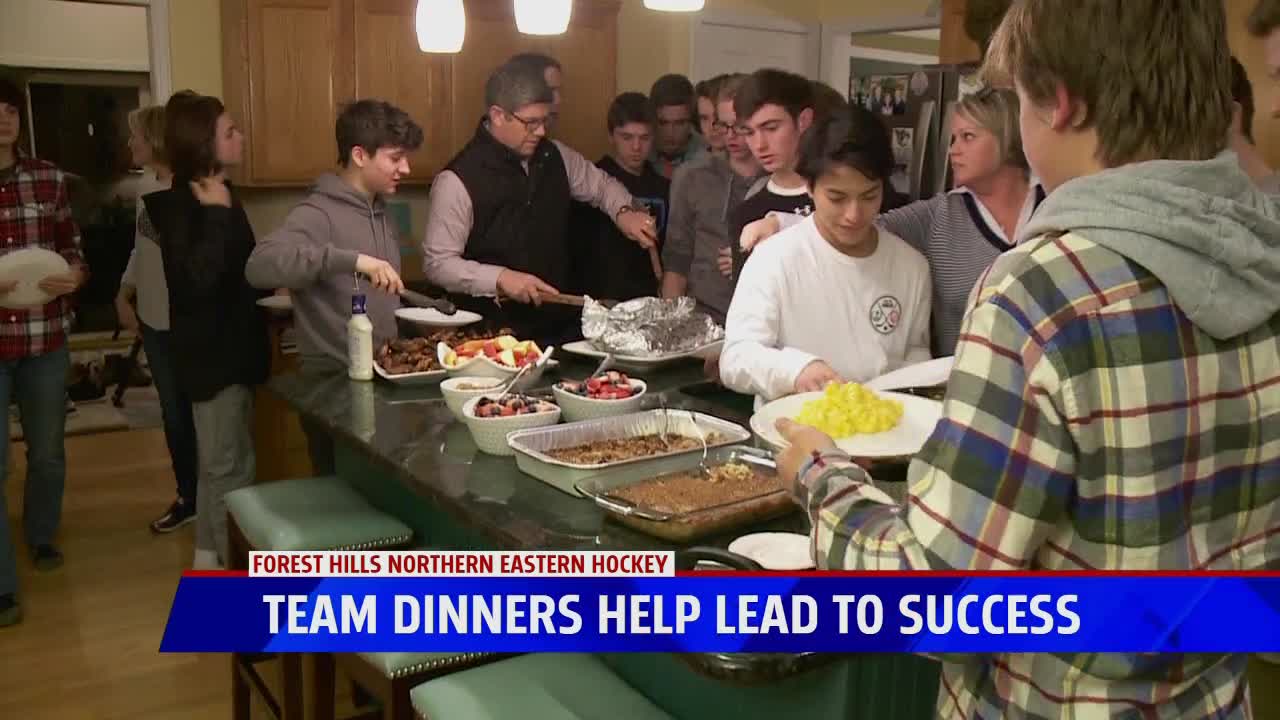 ADA, Mich. — The Forest Hills Northern Eastern hockey team is on a ten game winning streak but their success begins off of the ice.

"I think just bonding with the boys, being able to spend time off the ice and bond with your teammates," senior Ryan Endres said.

Every Thursday night, parents of the players take turns hosting the team at their home for dinner and team bonding.

"We just let them kind of hangout and bond," parent Dawn Almassian said, "the parents stay out of the scenes and the players go into the basement and hangout. They'll play ping pong, mini sticks, or XBox."

And yes, the XBox is always on after dinner for a nice tournament of NHL.

"We play a lot of video games, a lot of NHL," laughed sophomore Andrew Ramsahoi.

And when Endres says whatever happens, happens, he means it. In fact, the team even jumped into a river after one of the team dinners.

"Yeah, we jumped into the river," Ramsahoi laughed again, "it was freezing cold off of his rope swing, that was a lot of fun."

"It's always an interesting occurrence," continued Endres, "it seems like every team dinner it's memorable, there's something that makes it special."

Of course, the food can be memorable as well.

"Mac and cheese is a big one," said Ramsahoi.

Dawn Almassian is one of the team parents who isn't a stranger to having the team over.

"Ryan is our youngest, we've had a kid on the team for the past four years," she smiled, "we've done quite a few of these."

Not only does it bring the players on the team together, but the parents get a chance to meet the rest of the team.

"From a parent perspective, it's really neat because some of the boys you know and some of them you don't since it's a co-op," Almassian added. "We don't know what they look like without their helmets on so when they show up to your house showered and looking pretty, it's kind of fun for the parents I think."

The tradition of team dinners has led to better team chemistry and has helped fuel the ten game winning streak.

"It brings us together a lot," Ramsahoi said, "coming over to somebody's house after school, stress goes away, get to hangout with the team, it's a really good time."

"It's great just to have fun and not really worry about hockey," Endres added, "we just get to spend time together."