Mona Shores holds off Caledonia to advance to regionals 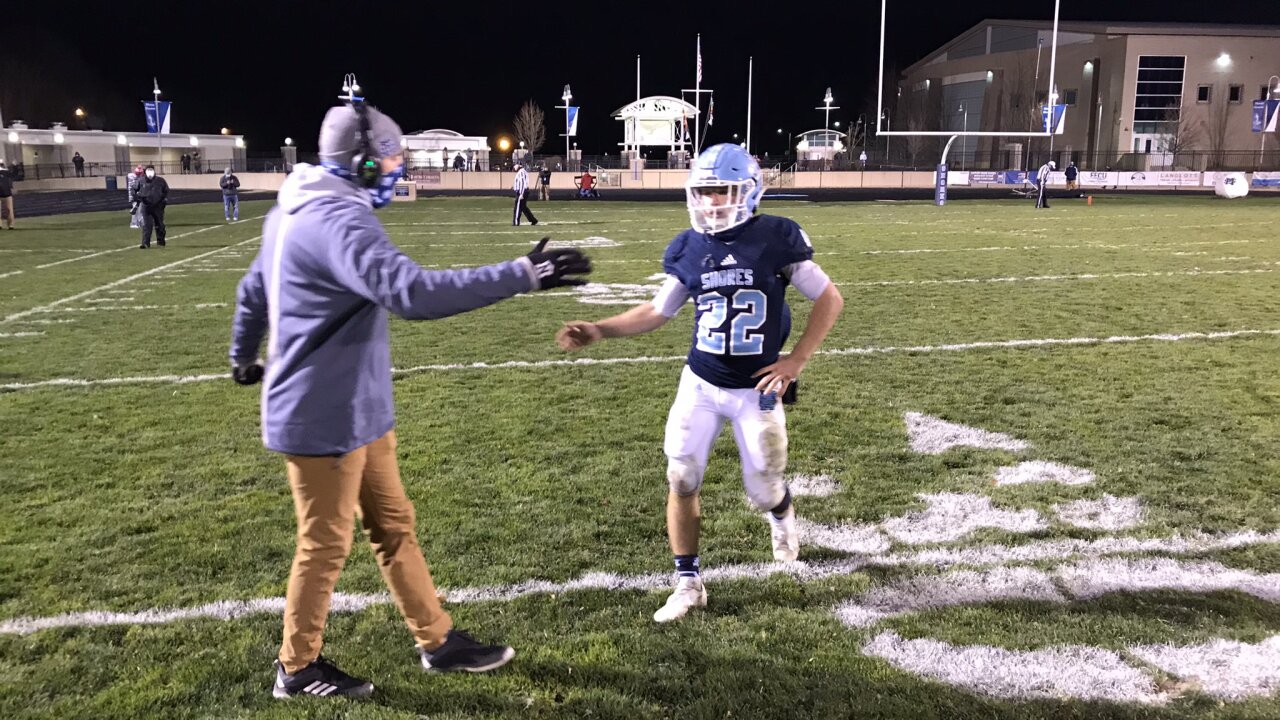 After two consecutive upsets on the road, seven-seed Caledonia traveled to Mona Shores to take on the defending state champion Sailors in Friday night's district final.

Mona Shores would own the opening quarter, jumping out to an early 14-0 lead just eight minutes into the game after a touchdown run by Elijah Farnum and a 70-yard score by senior quarterback Brady Rose.

However, the Scots would answer after freshman Brock Townsend scored from 15 yards out before the Sailors' Elijah Johnson answered that with a touchdown run of his own to make it 21-7.

At the end of the opening half, senior workhorse Carson VanderHoff would score on a one-yard for Caledonia to make it 21-13 after the extra point was blocked. Just over a minute later, the Scots would tie the game on a 25-yard touchdown pass from sophomore Mason McKenzie to Luke Mandsager. The score would be knotted, 21-21 at the half.

In the third quarter, defenses would step up but Mona Shores' Elijah Johnson would score the lone touchdown to give the Sailors a 28-21 lead after three quarters.
Once again, the Scots would answer as McKenzie found Nicholas Fox on a nine-yard touchdown score to tie the game up 28-28 with 9:17 left.

Brady Rose would then put the Sailors back in front after finding Elijah Farnum on a 62-yard touchdown pass, Farnum's second score of the game to make it 35-28 before Carson VanderHoff would tie it once again at 35 after a 44-yard touchdown run for Caledonia.

However, with 1:22 left, Brady Rose would score on a 13-yard touchdown scamper to give Mona Shores a 43-35 lead after the two-point conversion before the Sailors defense forced an interception to seal the win in the final minute.

As expected, senior leader and Mr. Football candidate Brady Rose led the way for the Sailors with 13 carries for 115 yards, two touchdowns while also going 7-of-10 passing for 138 yards and a touchdown. Not only that, but Rose would add 16 tackles defensively as well.

"We don't want to lose, our seniors drive until the game is over," Rose said after the 43-35 win.

The Sailors (9-0) advance to play at East Lansing next week pic.twitter.com/jCS48KYGgk

While Caledonia entered the game with a 4-4 record, Mona Shores head coach Matt Koziak knew that was deceiving.

"Tonight, our kids were amazing, that's a good football team we just beat, their record is very misleading," Koziak said, "our kids just found a way when it was time to get it done."

After the loss, it is also Caledonia head coach Tom Burrill's last game as head coach of the Scots after announcing he would be retiring at the end of this season.

"It'll hit me later," Burrill said after the game, "I really feel for our seniors, they wanted to keep going, we really thought we had a chance tonight and we did, but give Mona all the credit."

VanderHoff would lead the Scots once again with 45 carries for 240 yards and two touchdowns after a 343 yard performance in last week's 55-38 win over Lowell.

For the unbeaten Sailors, they advance to face East Lansing in next week's regional championship as the state title defense continues.