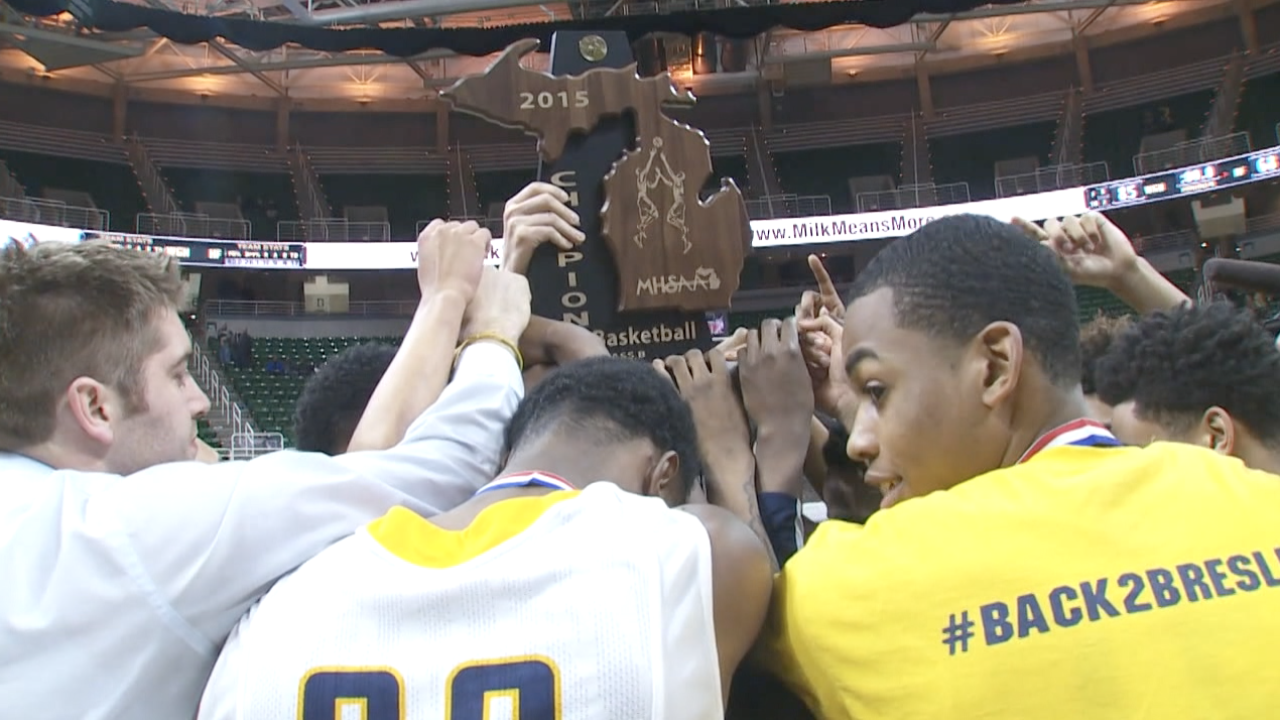 The Godwin Heights boys basketball teams celebrates the Class B state championship on March 28, 2015 at the Breslin Center in East Lansing.

Stakes were high for the Godwin Heights boys basketball team going into the 2014-15 season.

"There was a little bit of pressure, but we didn't really get down to it," said head coach, Tyler Whittemore.

Whittemore entered his first season as a varsity head coach after years of coaching at different levels in the Wolverines program.

"We were all in our 20s," Whittemore explained, "all of the coaches in their 20s, we were the youngest coaching staff I think around."

And with so much talent returning from a state quarterfinal appearance a season prior, the coaching staff had their work cut out for them.

"That was crazy," Whittemore laughed, "I didn't know who to play, when to play them, who to start, we had depth."

After falling to Benton Harbor in those state quarterfinals a year before, senior Delaney Blaylock and other returners had motivation to make it even further.

"We were just so hungry, so hungry," Blaylock said, "we were so close to getting back to the Breslin."

And after the tough loss, the returning players knew they had the talent to win it all.

"I can vividly remember all the players as soon as we came back, we were telling each other, 'Yeah, bro, we're going to win it this year,'" said 2014-15 senior guard, Essa Kellah.

Despite all of that talent, a lot of critics wrote Godwin Heights off, saying their success was a result of a weak schedule.

"A lot of critics had a lot of stuff to say about who Godwin Heights was as a basketball program," recalled Blaylock, "they were talking about how we have a cupcake schedule and we don't play nobody but we were whooping on Class A and Class B teams like they were Class C or Class D teams, we were beating teams that other teams in the city couldn't."

After jumping off to an 8-0 start to the season, the Wolverines suffered their first loss to OK Silver foe NorthPointe Christian, 58-55.

"We were like, 'alright, we got the taste of it now,'" said Whittemore, "we love the flavor of winning but boy, we hate the taste of losing even that much more."

The Wolverines would then collect eleven consecutive victories going into the state playoffs at 19-1 overall, winning those 19 games by an average of 24 points per game.

"I think one thing that really separated us from other teams is that we knew we had talent, but we knew that talent wasn't enough," Blaylock added.

A lot of the players had been playing together for years, many since elementary or middle school.

"I think team chemistry was number one, then talent was one B, it was one A, one B," Kellah said.

The Wolverines were one of the favorites to win the Class B state championship that season but right away, in the district final against Wayland, they were tested.

"Man, it was right down in districts, we had to play Wayland they had all their horses," said Whittemore, "they were a really, really good team, very well coached."

After they got by Wayland, 63-56, the confidence started to rise.

"We thought, 'Okay, who's next, we beat this team, now who's next?'" added Blaylock.

And the Wolverines would roll the rest of the playoffs, beating Alma, Charlotte and Spring Lake, all by at least 22 points before a six point win against Milan in the state semifinals.

The state final between the Wolverines and Detroit Henry Ford got off to a bit of a chippy start before the two teams even took the floor.

"You really don't know us as a team because we were already on another level, but that talk really maximized it, we like like, 'okay,'" Blaylock added.

And the Wolverines would get off to an unbelievable start, hitting 8-of-11 three pointers in the opening half, jumping out to a large lead.

"Man, we jumped out to a 20 or 25 point lead," Whittemore recalled, "let me tell you, that was the slowest game I've ever coached in my entire life."

The players felt the seconds tick by like minutes as well.

"It's crazy, I feel like a lot of the state championship game I can't even remember because it was like a blur," Kellah said.

Godwin Heights would win the game, 85-68 shooting 10-of-15 from three point range with five players scoring in double figures.

"Coming back to the crib, it's kind of like we were local celebrities," Kellah said with chuckles from Whittemore and Blaylock, "I kid you not, I was sitting outside my house and a cop walks by and goes, 'man, I just saw you playing on TV yesterday.'"

It was the first, and remains the only, championship in Godwin Heights boys basketball history.

"The only championship that Godwin has and there have been really, really good teams to come through," Blaylock added.

All of the outside noise and critics really fueled the championship run that year, according to the players.

"It's kind of funny now, because people used to say they could beat us and they could do this and do that, but we were the only team to do that and win it, you said we couldn't beat those teams, well we have a championship, what do you have?" Blaylock laughed.

For Whittemore, his first season of coaching varsity basketball had a storybook ending.

"I work in the gym still [as a physical education teacher], that's my classroom every day and walking in and seeing that banner and seeing those pictures still up and everything of us celebrating on the court, it's awesome," he smiled.

One thing is for certain, the 2014-15 Wolverines won't be forgotten anytime soon around the school, or the city of Wyoming.

"It's a very big deal," Kellah said, "we're literally cemented in history, not only at Godwin, but in our city."

And the team is still doing big things as Blaylock continues to play professionally in Ukraine while Kellah is a member of the Godwin Heights boys basketball coaching staff.