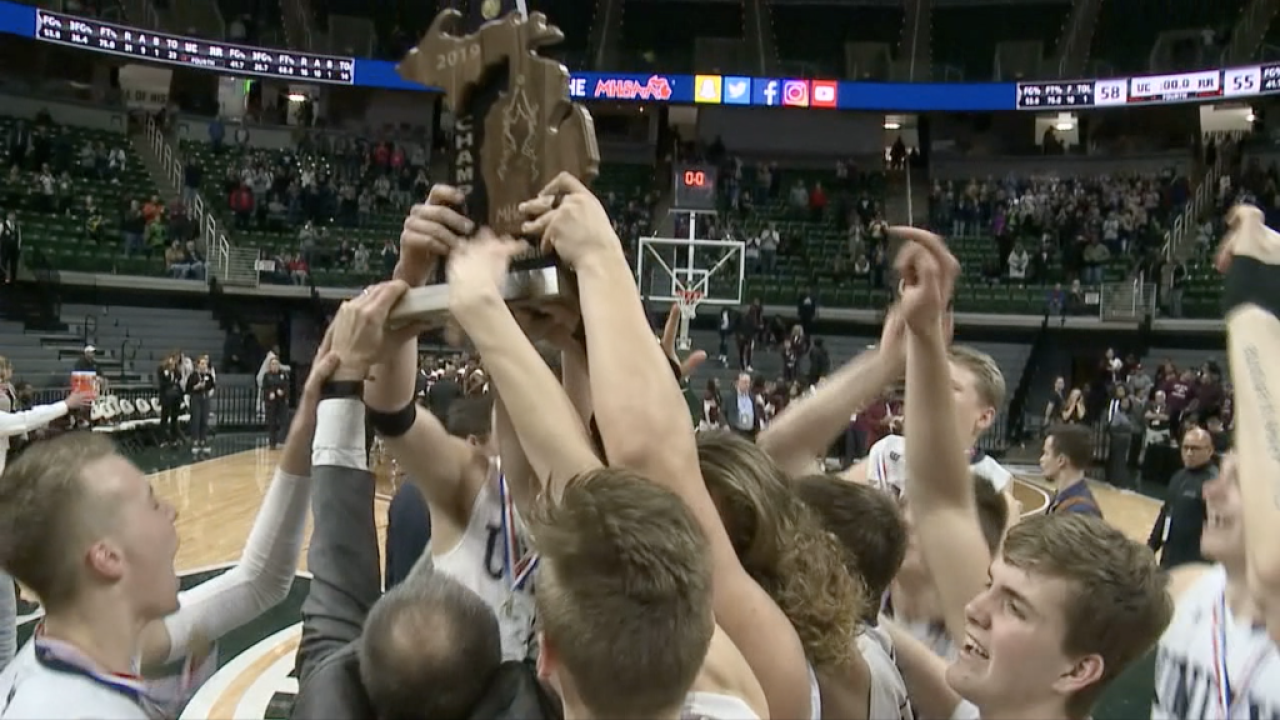 From then on, head coach Scott Soodsma and the Crusaders progressively got better, finishing the season on a 22 game winning streak en route to the Breslin Center.

"To our standards, we started off pretty slow," said 2019 graduate and point guard, Noah Wiswary, "we went into Christian break and it was like, we're either going to go down hill or go up from here."

And up they went.

"We just kept getting better and better," said head coach, Scott Soodsma, "to be honest with you, probably playing above our capabilities. I would go back to the tape and I would look at it and think, 'wow, we are playing really well, we are really shooting the ball, we have different kids stepping up.'"

Towards end of the regular season, Soodsma said something he never thought he'd say.

"With probably about five games left, I challenged the kids and said, 'I think you're the best team in the area,'" he recalled, "I am definitely a down player, a sandbagger, and I know that. It even struck my assistant coaches kind of funny like, 'who is Soodsma saying stuff like this?' But I really believed that."

After an 18-2 regular season and a perfect run through the OK Green, Unity Christian had to meet up with some powerhouses in the postseason, including defending state champion Benton Harbor.

"Going into that game, we thought we were big underdogs," admitted Wiswary.

Benton Harbor was no stranger to press coverage and hype as the Tigers looked to make another run to East Lansing to play for another state title.

However, the Crusaders came in ready to show the state what they could do.

"We weren't even ranked in the top ten that year," Soodsma said, "but I think that was the selling point to our kids, our community, our parents, that we believed we could win a state championship."

And the underdog mentality is something they kept throughout the entire playoffs.

"Being underdogs was good for us, I think," Wiswary said, "I think it put an edge on our shoulders and we just wanted to beat the teams and show the world that we're better than what people think."

Coach Soodsma credits the teams unity and unselfishness for the final result.

"They were so unselfish, they didn't really care who got the glory or who scored the points."

And the community continued to rally around the Crusaders during the final run.

"The thing that stands out to me most was really just the support from the community," Wiswary added, "the whole way through the playoff run and all the way to Breslin, the whole community was behind us."

"He promised those boys and that's something they kept reminding him of when they were getting closer," Soodsma laughed.

And Wiswary remembers it well.

"He was just messing around one day and he's like, 'yeah, if you guys do win states, I'll take you there,'" Wiswary chuckled, "so we got there and Bryce Lancer on our team was like, 'hey coach, remember three months ago when you said you'd take us there?'"

All in all, it was a magical run for Unity Christian after beating River Rouge, 58-55 in the Division 2 state championship to take home the trophy.

"You could talk all you want about different things and what changes we made but in reality, it was my kids, my kids were awesome and they got along so well, they had a lot of fun together," Soodsma smiled.

As Wiswary now begins his basketball career at Olivet College, he says it's something he looks back on almost every day.

"I still don't think it has set in just yet, I think maybe 10 or 20 years down the road when we look back on it, it will be even more special."

I’m You could talk all you want about different things and you do sign this you came up with this idea but in reality it was my kids and my kids were awesome I mean they got along so well. They had a lot of fun together."