The two appeared on stage together in Delaware 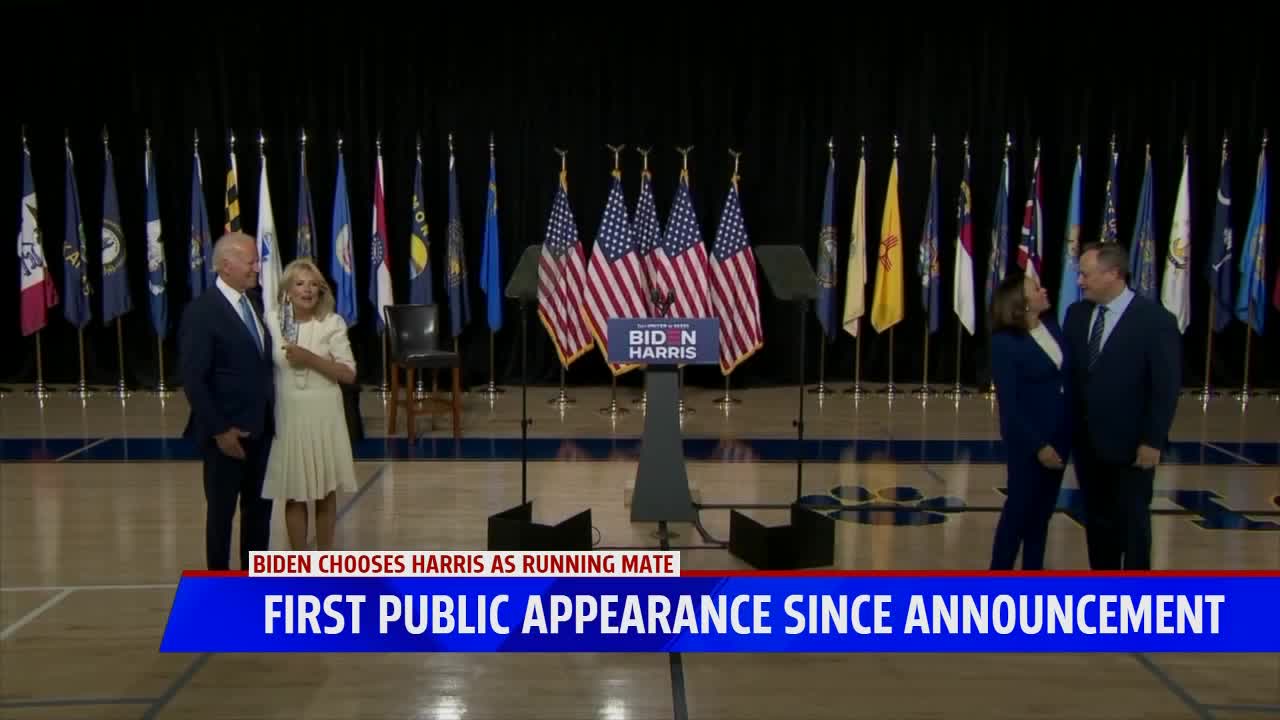 GRAND RAPIDS, Mich. — Presumptive Democratic nominee for president Joe Biden made an historic choice in picking California Senator Kamala Harris as his running mate. Senator Harris is now just the third woman to be nominated for the nation’s second highest job, and the first black woman.

“It is time, it is past time,” said Kent County Commissioner Monica Sparks, a Democrat. “And I believe that this is the ticket that can win.”

Harris becomes Biden’s teammate after first facing him as an opponent; she mounted an unsuccessful bid for president herself last year.

“Kamala Harris has had your back,” said Biden during an announcement rally in his home state of Delaware, “and now, we have to have her back.”

“This is a moment of real consequence for America,” said Harris, minutes later. “Everything we care about, our economy, our heath, our children, the kind of country we live in – it’s all on the line.”

Harris has become known as a fiery speaker and tough cross-examiner, garnering national attention for her questioning in the Senate of Jeff Sessions, Supreme Court Justice Brett Kavanaugh, and Attorney General William Barr.

“This is the jolt of energy that we need on the ticket and I am so excited,” said Congresswoman Brenda Lawrence, a Democrat from Michigan’s 14th District. “She understands the power of the Senate and the House working together for legislation.”

Rep. Lawrence endorsed Harris for president while her campaign was still alive, and has worked closely with her on the Congressional Black Caucus.

Biden’s pick of a VP candidate from a state he was almost sure to win anyways shows his focus on demographics over geography – a traditional consideration when presidential nominees make that choice. In fact, Harris and Biden have sparred before over the latter’s stance on race and bussing during his senate days. Perhaps one of the more memorable debate moments from 2019 was when Harris – who was bussed to school as a child – used herself in an anecdote to decry Biden’s former policies.

President Donald Trump, who twice donated to Harris’ political campaigns a s a private citizen, said he was “surprised” by the pick. Current Vice President Mike Pence told a crowd Tuesday that he congratulates Harris on her nomination, before saying he would see her in Salt Lake City. There is a Vice Presidential debate scheduled for October in Utah.

Click here to manage all Newsletters
Election 2020: Michigan Voting Resources
Check if you're registered to vote How to register to vote Where to vote Vote by mail: How to get your absentee ballot View a sample ballot