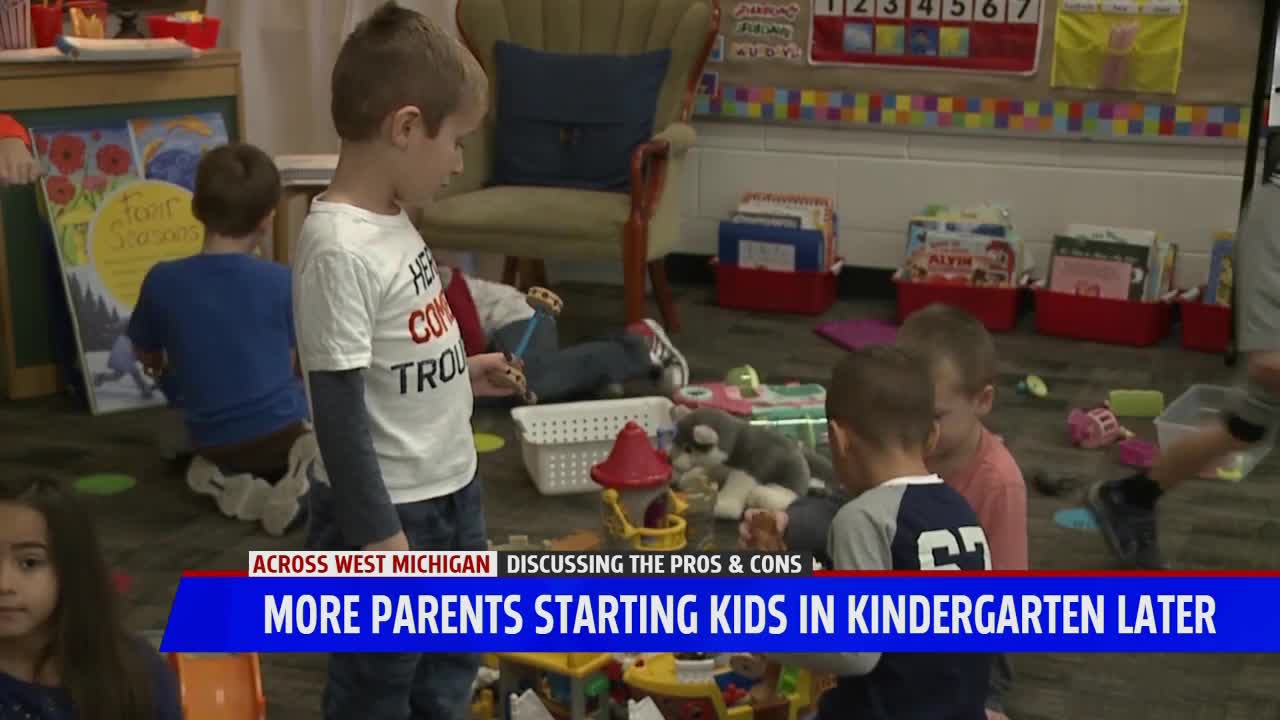 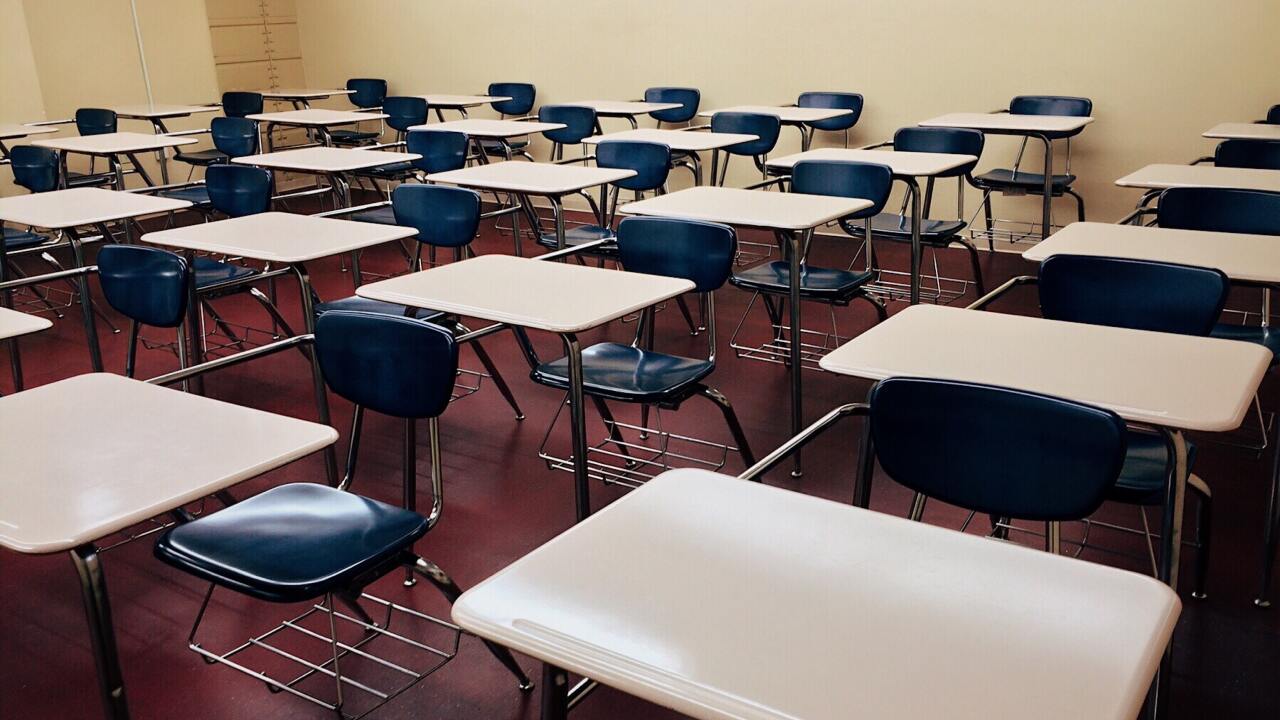 GEORGETOWN TOWNSHIP, Mich. — March is the month when most West Michigan school districts hold their kindergarten screening. There once was a time that if a child was old enough and academically ready, they’d start, whether they were barely 5 or almost 6.

But times are changing, as parents of children with summer birthdays are electing to keep their kids home or at pre-school through age 5 and starting them after they’ve turned 6.

Kim Abel of Spring Lake took her then 4-year-old son Garrett for his screen nearly a decade ago, and she was confident of the outcome. Abel said because he could read well for his age, she thought Garrett would start kindergarten that fall, a month after he would turn 5.

“They said, he was doing great academically and socially, he was great with other kids,” said Abel. “But then they said, ‘I’m going to encourage you do to the Developmental Program or Young 5’s this coming year.’”

Abel questioned that advice until she talked to some friends who work in education.

“They said, ‘you don’t really see a difference socially at this age, it’s more of when they’re in middle school. As they get older, you kind of see, they separate and the younger ones struggle,’” she said.

Ultimately, Abel and her husband decided to take the advice of others and wait a year before staring their son in kindergarten.

In the past, slow playing a child’s start to kindergarten was often thought of as an effort to try and produce the next superstar athlete in high school and maybe even college.

But Crystal Morse, principal of Bauerwood Elementary School in Jenison, says there’s so much more to it than that.

“The naysayers will say, ‘Oh, you’re redshirting a 5-year-old, right?’ They look at it from an athletic standpoint, but really it all meshes together so well,” Morse said. “From being able to problem solve, frustration tolerance, flexibility, all of kinds of skills that aren’t necessarily quantifiable, but you get an entire year to grow those.”

Morse admits the decision of when to start a child in kindergarten is a tough one for many parents. She said there are three different recommendations as to how to handle when entering a child into kindergarten.

“I’ve had people say, ‘well you just decide,’ but I have never made that decision for someone.” Morse said.

She often offers her personal experience as a mother of four kids in helping others make their decision.

The most common complaint from parents against a delayed start to kindergarten is that their child will eventually be bored with the curriculum, but Abel quickly realized that wasn’t a problem.

“Now there are so many for honors courses, and AP courses, kids can take college credits, so I feel there is enough opportunity to challenge them academically,” Abel said.

Another real concern is that some parents simply can’t afford another year of daycare or pre-school if their district doesn’t offer all day developmental or transitional kindergarten, like Spring Lake and Jenison.

“There are absolutely logistics that play into deciding factors, we’re all realists, working families trying to do our best,” Morse said. “But if your district doesn’t have a T-K, there are ways to meet those needs, don’t hesitate to ask. Reach out because every person in that school is going to want to make sure that kiddo has the best foot forward.”

Abel has seen some friends send their children to kindergarten twice when their district didn’t offer what they wanted.

In Jenison, school officials pulled information on students that had gone to T-K compared to those who didn’t.

“By and large, or T-K kiddos were a ton of our leaders, if you look at our top 10 in graduation, folks in leadership status,” she said. “I believe personally that confidence we build plays a factor from then on. Historically we’ve had 30-35% of our incoming kindergarten age students go to T-K.

“So, in any of our kindergarten classrooms, likely a third of them have walked in the door with some T-K experience, it’s pretty evident right out of the gates.”

Another real concern is whether a child will be ready to start college at 17. With the rising costs of college, there’s often little room in family budgets to consider anything beyond four years, so struggling in college now means extra costs.

“An extra year of maturity before we send him to college or out into the world isn’t going to be a bad thing,” says Abel. “I think parents just forget; you’re just thinking about what’s going on right now. I really encourage people to think 10 years down the road. How will this impact them because you just don’t think about it at the time.”

A personal counselor recommended two other points for parents to consider before making the kindergarten decision: would you rather your child be one of the first or one of the last in their group of friends to get their driver’s license? And if parents are having second thoughts about the decision they made years ago, there is still time anywhere in a child’s journey kindergarten through 8th grade to make the adjustment and slow play their eventual start to high school.

The counselor says the easiest way to repeat a grade, even if they’re doing fine academically, is to change schools to avoid any potential embarrassment. Students can do it as late as 8th grade without it showing up on their transcripts when they apply for college.

Educators say there is no right way to do things and what works for one child might not be right for another child.

Abel and her husband say are happy with the guidance they got years ago and the decision they ultimately made in slow playing their son’s start to kindergarten.