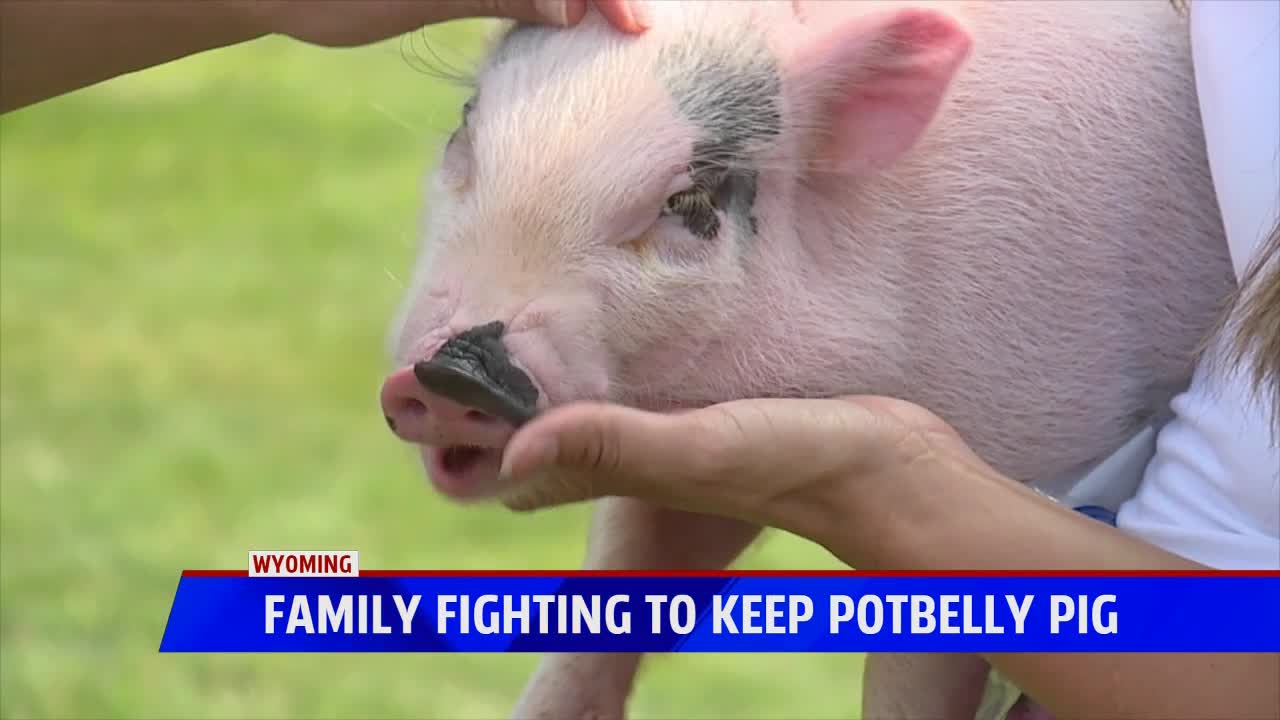 WYOMING, Mich — A family in Wyoming is hoping the city will take another look at one their ordinances so they can keep their potbelly pig.

The Botello family got a letter to remove the pig from the city on July 20th after a neighbor complaint.

The Wyoming City Ordinance states that animals like horses, sheep, goats, and pigs cannot be kept inside a house or on the property.

However, the Botello’s want everyone to understand their potbelly pig, Hamon, isn’t livestock, he’s family.

“Our kids have become super attached and they do everything with him,” Megan Botello told FOX 17.

The city, who didn’t want to go on camera with FOX 17, said that they received a neighbor complaint about Hamon, so they sent a letter letting them know that they were in violation of Section 301.4 of the city’s Property Maintenance Code, citing “appearance and curb appeal.”

“Not because of any nuisance issues, not because he’s just roaming around causing any damage to anyone for anything," Megan Botello said. "I don’t have any outside stuff for him, usually just kind of roams around our yard. He’s usually inside because of his delicate skin. He sunburns super easy.”

The City said that the family can request consideration from the code official, who will come out the home and look into their case.

Megan Botello said that she is a gathering all of the necessary paperwork, and will have that filed before Friday, July 31st.

“Is he for everybody? No, of course not." Botello said. "Just like dogs and cats aren’t for absolutely everybody, but just being allowed to have him.”

The Botello’s got Hamon at the beginning of May, because their son has Asthma.

“It’s our closest thing to having an animal like a dog, he can run and play with," Megan Botello explains. "Because they have hair instead of fur, they are considered hypoallergenic.”

Hamon has also been a distraction for all of their kids during this pandemic.

“It’s been a huge relief in that sense," Botello said. "It’s kind of helped push their thoughts away from asking us ‘So why can’t I play with my friends?’ Because they don’t understand, they just know that they can’t.”

The family said even if Hamon can’t physically live with them anymore, they’ll find a way to keep him a part of the family.

“He means too much to us, we can’t give him away, we just can’t," says 10-year-old Giselle Botello. "I don’t know what i would do without him.”

The Botello’s have until August 11th to get rid of Hamon, however, once they file their “consideration” paperwork, the case will be paused while the city investigates.

The City tells FOX 17 that even if that doesn’t go their way, they can appeal that decision to the Housing Board.

The end goal for the Botello’s is to have the city change their ordinance for potbelly pigs altogether, which is something that will have to be taken up by the city council.