Murals popping up all over GR, part of city-wide scavenger hunt 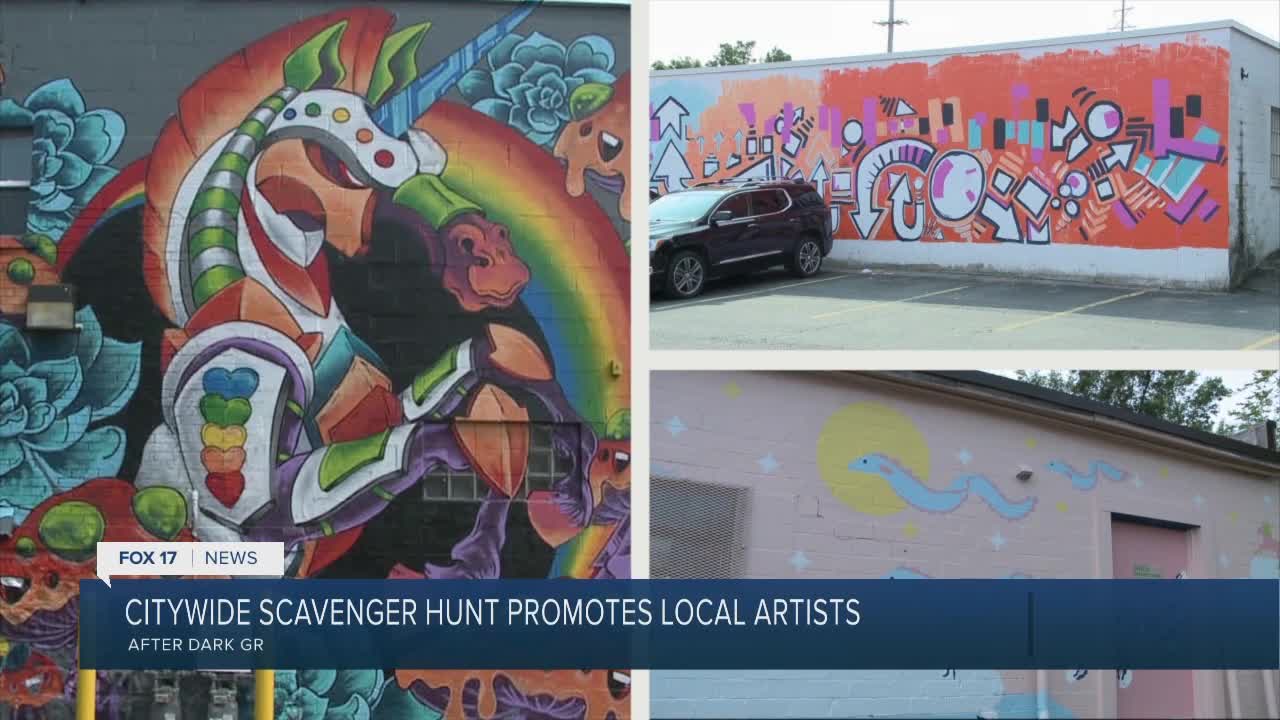 GRAND RAPIDS, Mich — There's dozens of murals popping up in Grand Rapids and they’re part of a community-wide scavenger hunt.

If you live, work, or even commute through some of the more prominent Grand Rapids neighborhoods, like Creston, South Town, The West Side, or Michigan Street, you’ve likely noticed these new pops of color.

She one of a handful of artists creating massive murals for After Dark GR’s city-wide scavenger hunt.

Hannah Berry, the leader behind the movement and owner of Lion and Rabbits said, “The project is about artistic economic development first and foremost and then ‘What is equity in the arts in your neighborhood?’”

Berry said that their goal is to help artists get noticed and boost economic development in Grand Rapids neighborhoods.

“How can we continue to make sure that these artists are having these local jobs, but then the community is benefiting from them at the same time?” she said.

The local artists are transforming otherwise bland and broken walls outside local businesses to promote their work and encourage people to explore their own communities.

Berry said, “We are really honing in on hyper-local things, so people can see what the Friends of Grand Rapids Parks are doing, or what T-Mobile is trying to do in the community. You know, all of these people are trying to do things it’s just how do you get it out? The word-of-mouth in Grand Rapids is huge.”

It’s both challenging and thrilling for Moore, who’s mural is right outside The Cheese Lady near Fuller Ave and Michigan St.

She said, “There will be an area that is a little bit harder to paint, so just moving stuff around and being able to just draw large and hope that it’s going to turn out how your sketch originally was.”

She describes her mural as bright, whimsical, and it may have you asking ‘what’s that?’

She added that being a part of the project has been therapeutic.

Berry said, “There’s 100+ things to do in the city of Grand Rapids. Once you do them, take a picture add it to your highlight reel, make an ‘After Dark’ highlight reel, follow us, tag everything that is on there and you’ll get added into a raffle for each one of those things that you do.”

There are more than 50 free things on the list and the other’s are all geared towards supporting local businesses, like eating out at a local restaurants patio.

For both Berry and Moore, seeing everyone get involved is just further proof of what art can do for a community.

Moore said, “ I think it really does bring us together. It’s something that we can all come together and look at, talk about, it creates a dialogue, it creates controversy in some cases, but that’s good because we’re talking and we’re getting to know each other.”

The project is a partnership through the Michigan Economic Development Corporation. They’ll be matching donations made to the project.