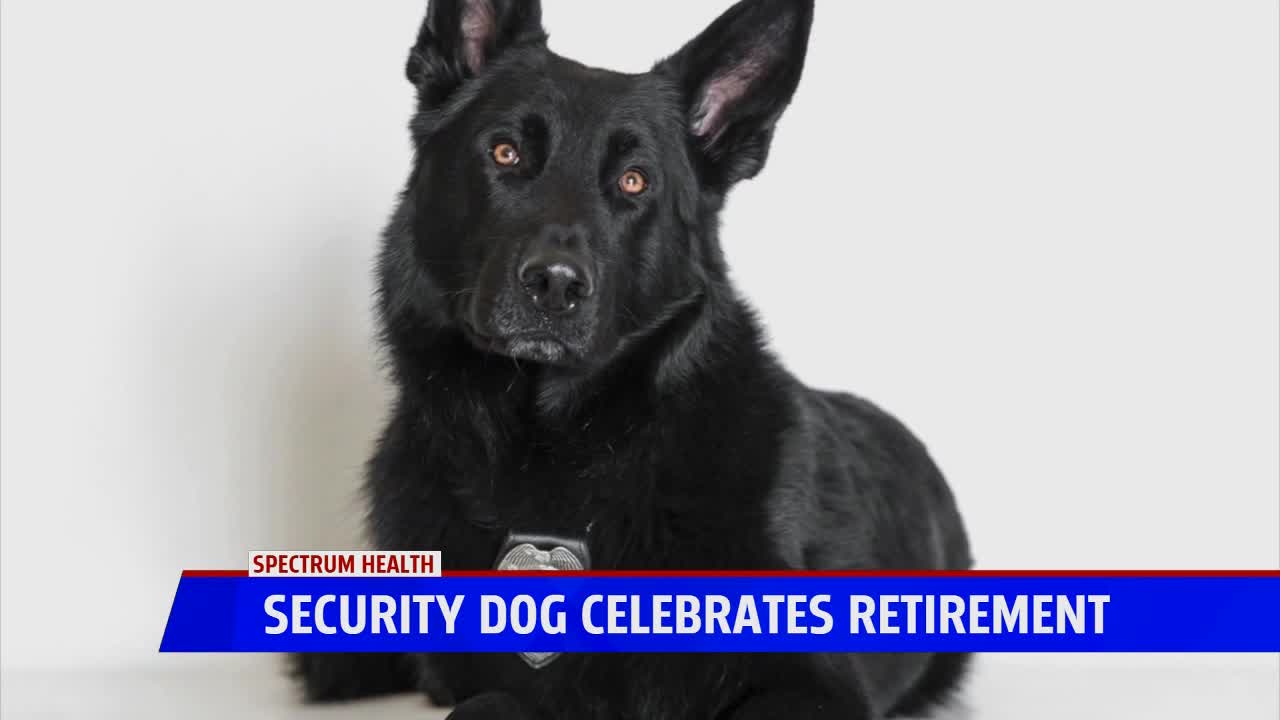 GRAND RAPIDS — One of Spectrum Health’s hardest workers is retiring. Cain the K-9 will now be spending his time at home with his handler, who calls it a bittersweet moment for their team.

Although his job is to protect the hospital, his handler, Spectrum Health Security Police K-9 Officer, John McGarry told FOX 17 he was at his best when he was visiting with kids.

He said, “It’s been an amazing journey with this dog, he’s awesome.”

After roaming the halls at Spectrum Health hospitals for 5 years, Cain is hanging up his badge and trading it for more tennis balls.

Officer McGarry said, “He’s done a fantastic job for us and he deserves a break.”

Cain has developed elbow dysplasia over the years which can be painful for him.

“Between the vets, and the department and me, we decided it was probably a good time for him to go ahead and retire,” McGarry said.

He said the COVID-19 pandemic also put a damper on some of their regular duties, after dogs were restricted from the hospitals.

Officer McGarry “He was not happy about it. I would leave for work and he’d be like ‘Wait, where are you going, why am I not going?”

Though his main job is to search rooms, sniff for bombs, and apprehend bad guys, Officer McGarry said Cain was best at being gentle.

He said, “His favorite hospital was the children’s hospital, no offense to Blodgett, Butterworth and everyone else, but he loved the kids. He would jump up into bed with them cuddle with them.”

Officer McGarry recalled one time in particular when he and Cain were asked to come to a man’s hospital room a couple years ago.

He said, “We went in there, Cain hopped up in the chair next to the bed and he kind of leans over into the bed, and this guy kind of lifts his arm up and starts petting the dog, and everyone starts crying. I’m like ‘What’s going on?’ And they told me that he hadn’t been moving up until that point.”

Comments on Spectrum Health’s Facebook page about Cain’s retirement, is bringing back other memories too, especially from the holidays.

Officer McGarry said, “I am of course Batman and he’s Superman. I also had a full Grinch outfit, and he got off easy, he only had an antler on his head for Max.”

Cain will still live with Officer McGarry, but said the transition will be tough.

“We’ve been through so much, I mean he’s literally been with me more than my whole family for the 5 1/2 years I’ve had him,” he said.

Officer McGarry will soon start training with a new dog, but said that Cain has that special something that he’ll miss having in a partner.

“We completed our mission, one of our missions and that was to improve the health of those around us so yeah... job well done,” he said.

Officer McGarry said that one of his favorite memories was getting to meet the Queen of the Netherlands when she visited Grand Rapids a couple years ago.

He added that Cain will likely be spending a lot of time in his Grandmother’s swimming pool and relaxing.