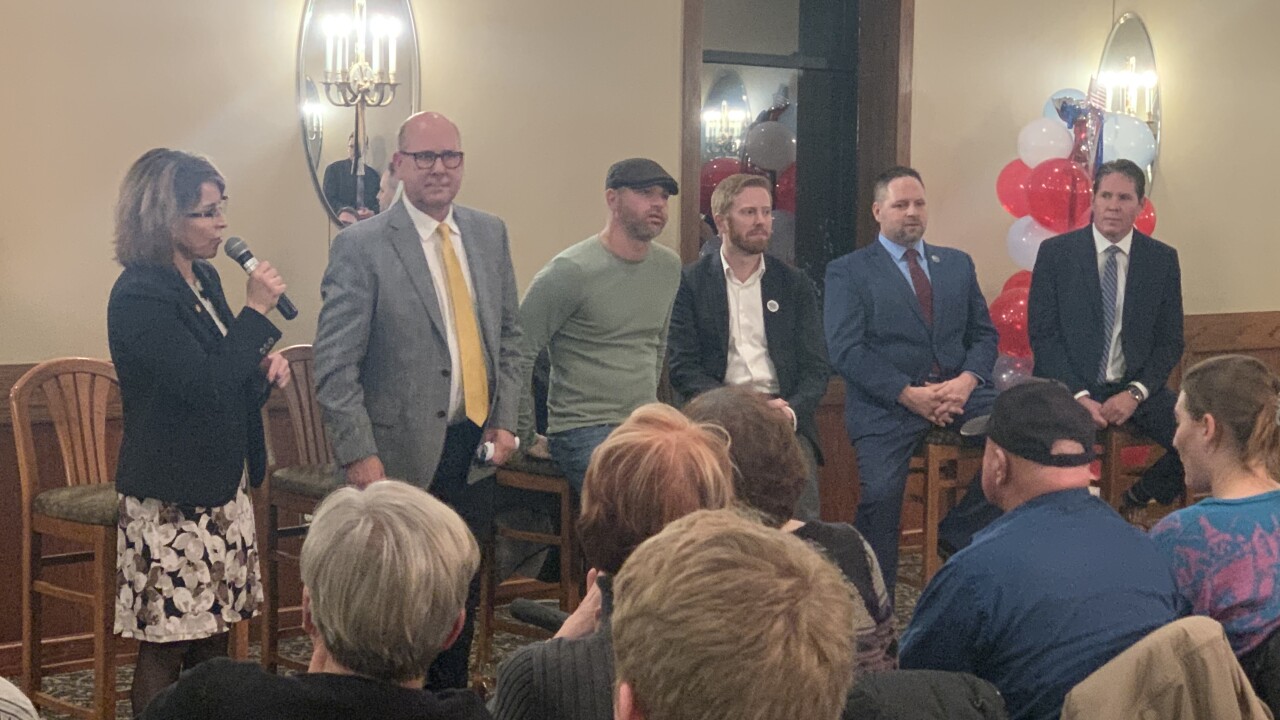 Copyright 2019 Scripps Media, Inc. All rights reserved. This material may not be published, broadcast, rewritten, or redistributed.
Six Republican candidates in public forum

GRAND RAPIDS, Mich. — In a district where loyal conservatives are yearning for a candidate to stand with President Donald Trump, six Republican candidates are fighting to replace U.S. Rep. Justin Amash, I-Grand Rapids.

The candidates were questioned about criminal justice reform, national debt, veterans issues and other topics.

Becker asked the candidates to name the policies, if any, on which they disagree with the president.

Afendoulis said there have been several times when she thought she disagreed with the president, but ultimately agreed with his stance after seeing the result.

“I think the most recent one was in Syria," Afendoulis said. "I just wasn’t quite sure how I felt about that and you know, things turn out for that man so, he does not go about things without thought and I respect that.”

Farrington, who is the most moderate of the candidates, was heckled a couple times during the forum for his pro-choice stance and objection to the president's tax plan. He said the president doesn't do enough to address infrastructure.

“I do have disagreements and some of them are quite obvious," Farrington said. "I’d say having a House and Senate for two years and not being able to pass infrastructure is, well, something I would definitely disagree with.”

“I don’t like the direction the debt is going," Meijer said. "I wish the spending bills that the Congress is passing, the president would kick them back and make them work harder.”

Willis, who didn't shy from incorporating his religious philosophy into his answers, gave a simple answer.

“Actually, I was asked that question just before we began and my answer was, I can’t think of any Trump policies that I don’t agree with," Willis said.

Langlois didn't specify which, if any policy on which he disagrees with the president. Instead, he emphasized the importance of how to disagree.

“Part of supporting the president is having discussions and debates behind closed doors," Langlois said. "I don’t think the way Justin Amash has approached disagreements with our president by going to Twitter or to the press and bringing up those disagreements, I think that’s wrong.”

Norton, a staunch defender of the president, only found fault in Democrats for a shortcoming in the White House.

“I believe in a balanced budget amendment, period," Norton said. "It’s something that needed to be done a long time ago. It’s something that we actually have to work on and I don’t think necessarily that the president and I would be in disagreement of it. I think the problem is, the guy is fighting on so many frickin’ fronts, that he doesn’t have time to address it.”

On the Democratic side, three attorneys are running: Nick Colvin, Hillary Scholten, and Emily Rafi.

Amash is running for reelection as an independent candidate.