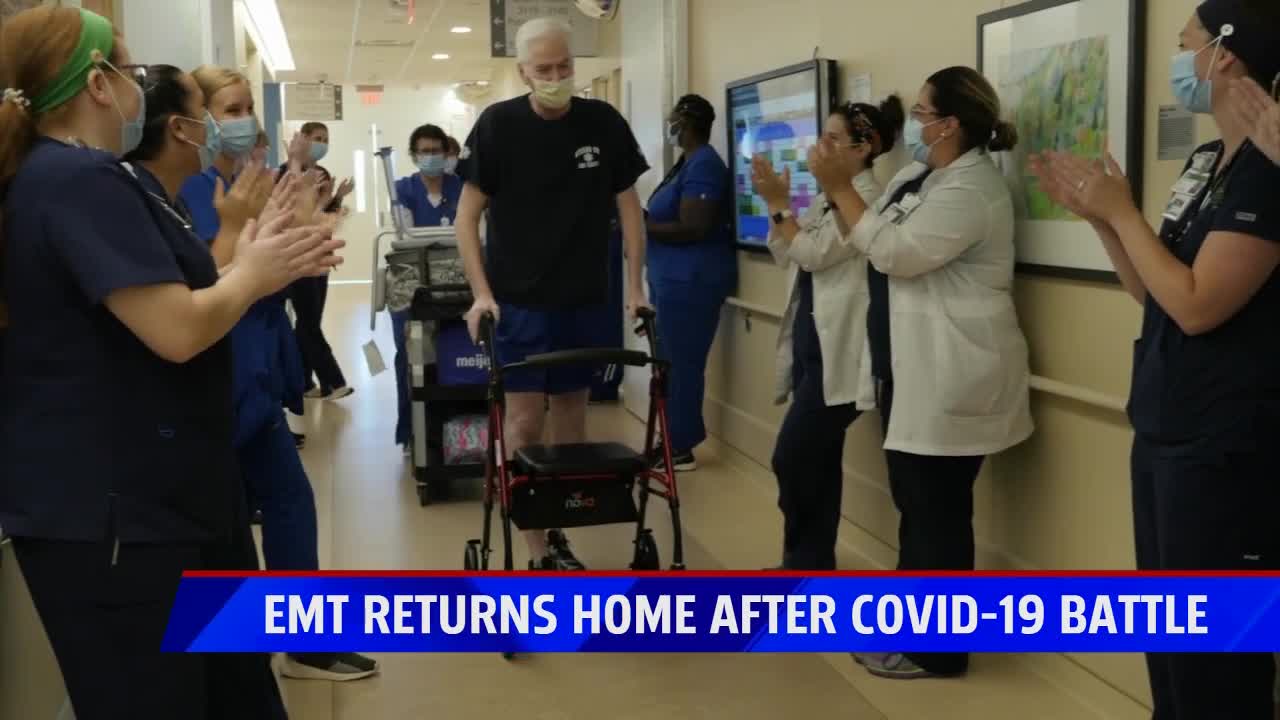 GAYLORD, Mich — An EMS worker in Otsego County is back home after recovering from COVID-19. He spent several weeks at Mary Free Bed Rehabilitation Hospital and tells FOX 17 that eight others on his team also came down with the virus.

Doug Galer has been with the EMS in Otsego County for 30 years and said he and his team can’t really pinpoint how they all got sick.

His recovery has taken three months and he’s still doing physical therapy, adding that his experience is something he wouldn’t wish on anyone.

Galer said nothing could have prepared him for fighting COVID-19.

“I came home in the middle of the night, bad chills, just didn’t feel right. I missed work for a week and then one early evening, I just went into Acute Respiratory Distress. It was terrible, i couldn’t breathe.”

That was in early April.

The next couple of months would become a blur of three different hospitals, a medically induced coma, and a ventilator, then finally, Galers wife, Kellie, was told the good news.

Kellie Galer said, “At 9 o’clock in the morning on 9th of May, the nurse called and said ‘He’s awake!’ and I couldn’t get to Traverse City fast enough.”

Galer’s next step in recovery involved an extra special transfer for this rehab.

Doug Galer said, “One of my crew was able to come over and take me down to Mary Free Bed.”

It’s the place the Galers said gave Doug his life back during a time that could have been devastating.

Dr. Chris Rizik, one of Galers Rehab Physicians said months of lying in a hospital bed had taken its toll.

“He was just extremely debilitated at that time,” Dr. Rizik said, “He had a non-functioning swallow, he couldn’t really walk couldn’t even really talk. “

But Galer was ready to get to work.

Dr. Rizik said, “He was always willing to go to therapy whether he had a good day or a bad day. His effort was just unbelievable his attitude was so positive every single day.”

Galer had to re-learn how to talk, walk, breathe, and even do basic tasks on his own.

He said, “Because of their attitude, mine would improve so much that I would push harder and longer. They’d want me to do so much of this, I would do extra.”

After 4 weeks with their Mary Free Bed Family, it was time for the Galers to go home.

Not only did the hospital staff host a little send off for him, but the Ostego community, Fire Department, Police Department, and others came out in droves to welcome Galer back.

He said, “We got about halfway up the street and we had friends lining the street and that’s when I really started crying. I was so happy and excited.”

As Galer continues his recovery at home, he and his family hope other’s see his journey not only as a cautionary tale, but what can happen when you have a team to get you through your toughest battles.

Doug Galer said, “You have to take it seriously, I am proof of that. You have to wear a mask when you were out and about, wash your hands, and keep your distance.”

Galer is still doing rehabilitation therapy three hours a day, twice a week. He still has some lingering lung issues and overall weakness, but said that if he could go back to work tomorrow, he would be there.

He’s hoping to be back with his EMS team in the next couple of months.