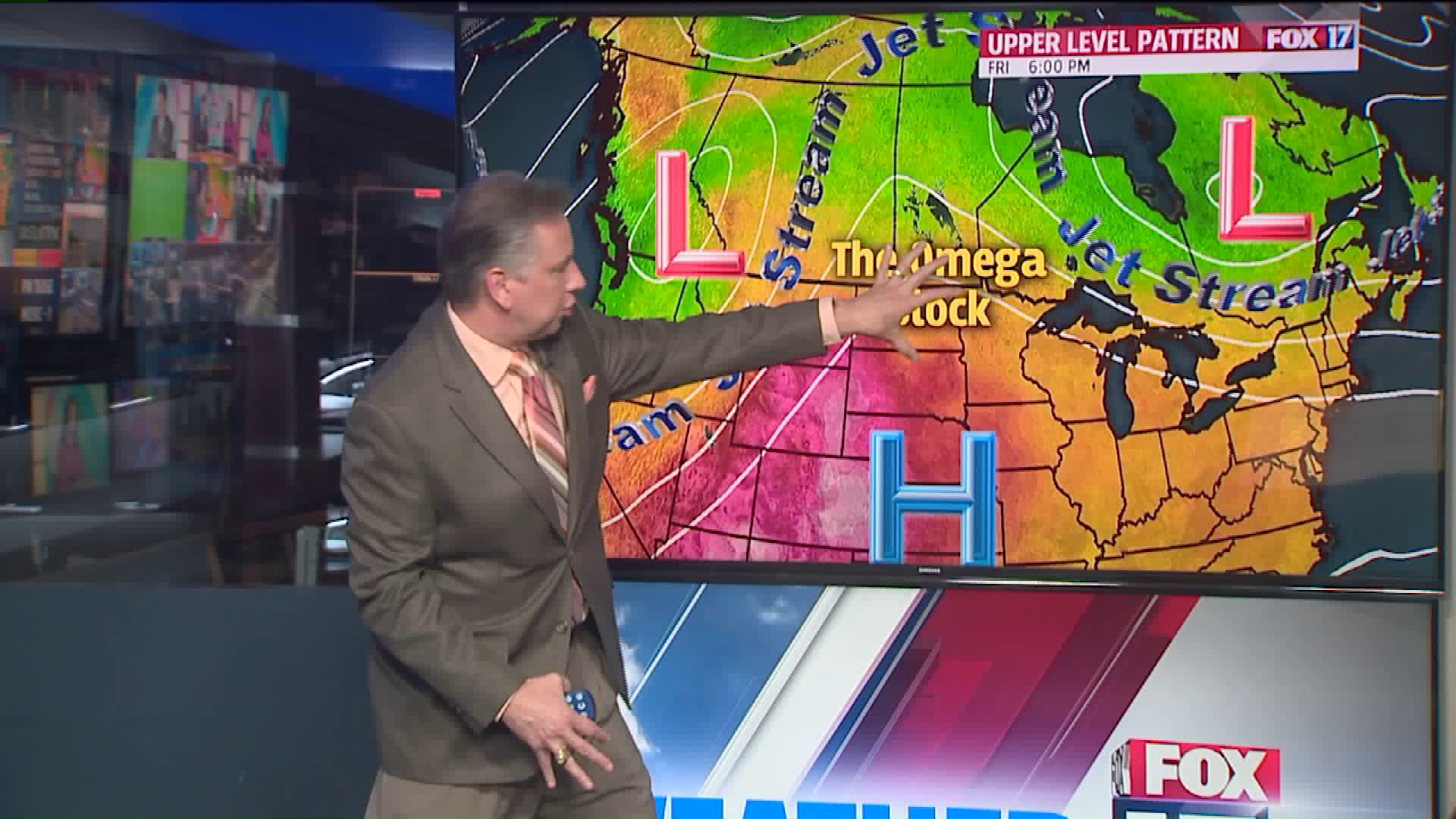 WEST MICHIGAN -- There are plenty of us, not the least of which are the farmers, waiting patiently for a long, dry stretch of weather. Just this weekend one farmer located "on the ridge" in Kent County said he was almost a month and a half behind planting soybeans and corn, but they are now in. He's unsure of how his yield will be at the end of the road. The ground is saturated in many locations and Lake Michigan is in near record territory with beach erosion continuing and people living on/near the water quite nervous. That said, our precipitation chances will be limited after Monday thanks to something called the Omega Block.

Think back to the Greek alphabet and the symbol for omega...similar to that of a horseshoe shape. That pattern on weather maps tends to be a blocking pattern...usually for several days. The pattern (or omega) starts to take shape on Wednesday and will be fairly well-defined by Friday. See our forecast model below valid for Wednesday morning. This model is looking at the atmosphere at 500 millibars or about 18,000 feet high. This level shows our trough/ridge pattern the best. Note the map of the United States and low pressure areas over the Pacific Northwest and James Bay in Canada. You'll also notice high pressure building in over Texas.

The next image below is valid for Friday morning. Notice the low pressure systems and troughs over the Pacific Northwest, while another well-defined low is over James Bay in Canada. There's also a huge ridge of high pressure over a large portion of the nation. These ridges make it difficult for rain to form, and it generally keeps temperatures at/above normal. So essentially, the ridge blocks systems from moving into/through the bubble of high pressure. Winds are generally light under these areas as well. Under the left and right side troughs and lows, cooler than normal temperatures and unsettled wet weather is usually the rule of thumb.

To make it a little easier to understand this Omega pattern and blocking ridge, I've drawn the upper level jetstream on our FOX 17 map valid for Friday afternoon. Notice how it resembles a horseshoe or Omega symbol below.

So while it may be possible to get some shower or storm activity in this type of pattern under the ridge, it generally is NOT conducive to much...unless you're located under one of the lows or troughs. So to recap, I would expect an extended period of dry/warm weather AFTER Monday as this blocking pattern or Omega develops and sets up. You can read a bit more on this here.

Get the complete West Michigan forecast at www.fox17online.com/weather.