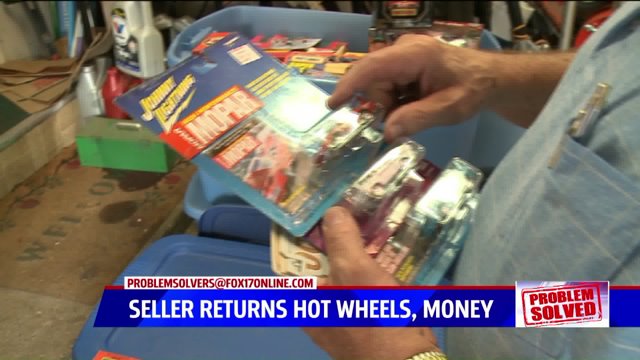 JENISON, Mich. – One day after the FOX 17 Problem Solvers took on a story centered on a large collection of valuable Hot Wheels cars, a resolution has been reached.

Back in 2015, Gerald Beak, the owner of that collection, hired third party seller Marc Sinke when the time came to sell his cars. Over the 30 years prior, Beak had amassed close to 45,000 of the iconic toys and estimated them at a value of approximately $173,000.

Sinke, who was entitled to ten percent of the final sales, found a buyer and sold a portion of the collection – but only provided Beak with a small percentage of the cut. On top of that, Sinke was still in possession of thousands of Beak’s cars that weren’t included in the sale.

One day after the Problem Solver’s initial story, Sinke agreed to pay back what he owed, and return the cars he still had in his possession.

“I’m glad that he’s starting to do what he should have done in the first place,” said Beak. “He made mistakes. If he learns from it and it betters his life, it was worth it.”