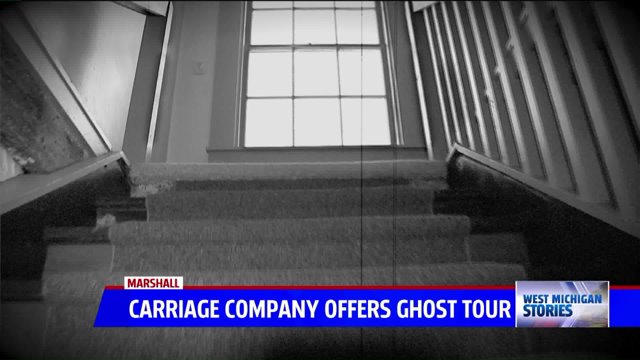 MARSHALL, Mich. -- Many of us seem to get intrigued by tall tales of ghost stories and folks from long ago that may still be haunting houses, hotels, or other locations. Some of us have seen these spirits from time to time and we all love a good ghost story. Marshall Carriage Company provides ghost tours and spooky tales across the city via horse drawn carriage. That said, it is documented by many that several of these ghosts and spirits have been known to frequent certain places. This story is about the tour, the homeowners, and the National Inn Hotel where they've been seen or heard numerous times.

Marshall itself is quite the historic town. It is said that there are more historic structures in Marshall per capita than almost any other city in the United States. With this history also comes tales of people that came long before this generation. Brian Mason runs the ghost tour and tells the stories, some of which have been passed on from generation to generation, about how these spirits have shown up in places over the decades. The first stop on our tour was the 1880s house of Holly Harnden. It's located in a regular neighborhood, but Holly told us the previous owner left an old cash register behind up in the attic many years ago. To this day every once in awhile Holly and her husband can hear that register ring. She also tells us the story of how her husband has been away on business trips and she remembers vividly turning off the shower diverter...the handle that switches/diverts the water from spigot to shower-head. That said, every once in a while she'll enter the shower only to find she gets blasted in the face with ice cold water from the shower head that was turned back on...some how.

With an old brick house and cylindrical architecture she has the perfect place for Halloween. She goes all out decorating with lights, ghosts, ghouls, and goblins from top to bottom outside each year. It's very well done and actually reminds me of the old house in the 1960s TV series "The Munsters." In fact, small lighted globes called orbs have appeared in some still photography of her home further reinforcing the idea of some paranormal activity that may exist. Orbs have been defined as energy from deceased people. Read more about it and what they look like here.

Another house on the ghost tour with Brian is located at the corner of Green and Marshall Streets. While it hasn't happened lately, the previous owners would experience the name of the ghost being written on the wall at times. The ghost's name was Hannah...and sometimes the property is referred to as the "Hannah House." Folks have also said they've seen an older lady in the upstairs window.

There are plenty of places to see on the ghost tour as you sit back and enjoy a horse drawn carriage ride. Brian also does a great job in giving historical tours of Marshall and weaving in plenty of historic facts about the city within the ghost tour itself. Without question the most famous ghost story in Marshall is all about the lady in red that has been seen numerous times in the National House Inn bed and breakfast. According to Brian Mason, "she was supposedly a lady of the night. And she had lived here before this was a bed and breakfast and it was apartments, and she had lived here and she still haunts to this day and people see her mainly on the front staircase.” While Hollywood has made the traditional ghost out to be spooky, scary, or life-threatening, it's a far different story with the ghosts in Marshall. Brian says “most of the ghosts in the paranormal that happens here in Marshall are actually intelligent. They actually will move things or you know, they do different things.”

The Marshall Carriage Company Ghost Tours are becoming increasingly popular, especially this time of year when Halloween is fast approaching. It's a great, fun, and entertaining way to spend a few hours in an interesting town. You can reach the Marshall Carriage Company and their website here. See their Facebook page here. Trip Advisor has more insight and comments on the tour too. Click here.