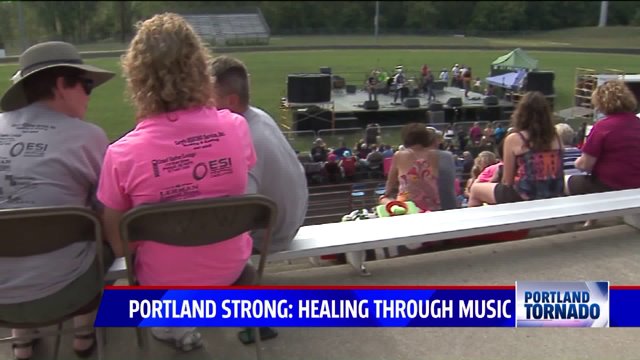 PORTLAND, Mich. -- In parts of Portland, you can still see small remnants of destruction - reminders of the EF-1 tornado that touched down on June 22nd.

But not at tonight's Portland Strong Relief Concert. The event wasn't a distraction from what still needs to get done, but more so an effort to make it a permanent part of the city's past.

100% of the proceeds from the concert went to a community relief fund. Soon, residents affected by the storm will be able to apply for a portion of those funds on an as-needed basis.

"There’s going to be people dealing with insurance companies and lenders and sometimes they fall short," said Gorman. "And so through the Portland community fund we’re trying to make sure that everyone is reached.”

The headliner tonight - 17-year-old Shelby Ann-Marie, a familiar face around Ionia County. Two seasons ago, Shelby found herself among the top 75 during season 13 of American Idol. Since then, the Portland native has opened for big-name country acts including Chase Rice, Craig Morgan and The Band Perry.

"We actually live about a block away from where the major damage was," she said. "It’s just crazy to see streets you walked up and down your whole life just torn to pieces. All the churches - it’s just crazy you never think it’s gonna happen to your own town.”

Jim Barnes, Mayor of Portland, said residents have been resilient throughout what has been a long two months.

"Everybody that I’ve spoken to are taking it in stride," said Barnes, "and is very matter-of-fact. And I think a lot of it is because they know that they aren’t alone. I mean, this thing hit the entire city. so therefore the entire city is involved in the response.”