Muskegon senior sent home from prom due to dress code 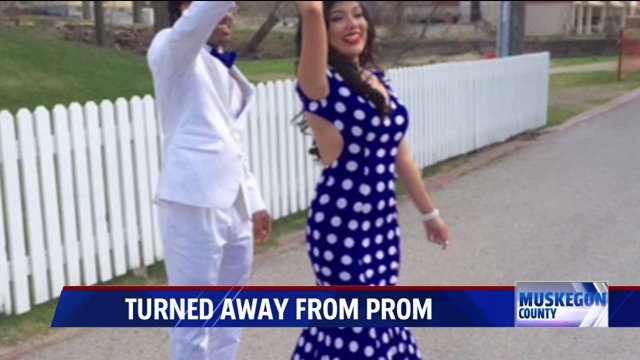 MUSKEGON, Mich. -- Muskegon High School senior Mireya Briceno was sent home an hour into her prom Friday night when she was told her dress was in violation of the dress code.  Her mother Connie told FOX 17 that she and her daughter went over the rules last week and thought her $300 dress was fine.

Among many other rules, one specifically states that "no midriff is exposed," which includes seeing the middriff through a sheer material.

Mireya's midriff wasn't showing in her blue and white polka dot dress, but her side could be seen.  "When you look in the mirror, there should be no skin showing around the midriff area," said Connie.  "When her arms were down, you couldn't see any skin."

Connie doesn't know the exact reason her daughter was told to leave the prom. She's only guessing, because no one has told them.

"They asked her to stand-up and turn around, so she turned around and they simply told her 'You're in violation. You need to go home,'" said Briceno.

Connie also points out that pictures show several other girls with similar dresses who were allowed to stay, including girls with sheer see-through material over their midriffs.

We spoke with the Muskegon High School Principal Brad Perkins Monday, but he would not speak on camera.  He told us two other girls were sent home Friday night, but they returned in a different wardrobe.  He also told us that he was told by his vice principal that Mireya wore her date's jacket over her dress to get in but later took it off.

Perkins added that when the vice principal asked Mireya whether she wore the jacket to cover up because she knew she was in violation, Mireya said, "Yes," but her mother disputes that.  "She wore the jacket outside because it was chilly, but she took it off at the front door and even posed for a picture with the cheerleading coach in that dress," said Connie.

Principal Perkins refused to look at the pictures of Mireya or other students when we presented them to him.

"What would be the purpose of looking in the past?" he asked.  Perkins adds he stands by the school's dress code, which has been in place for four or five years, longer than he's been the principal at Muskegon High.

As for Connie, she would like an apology, but she said she's not expecting one.