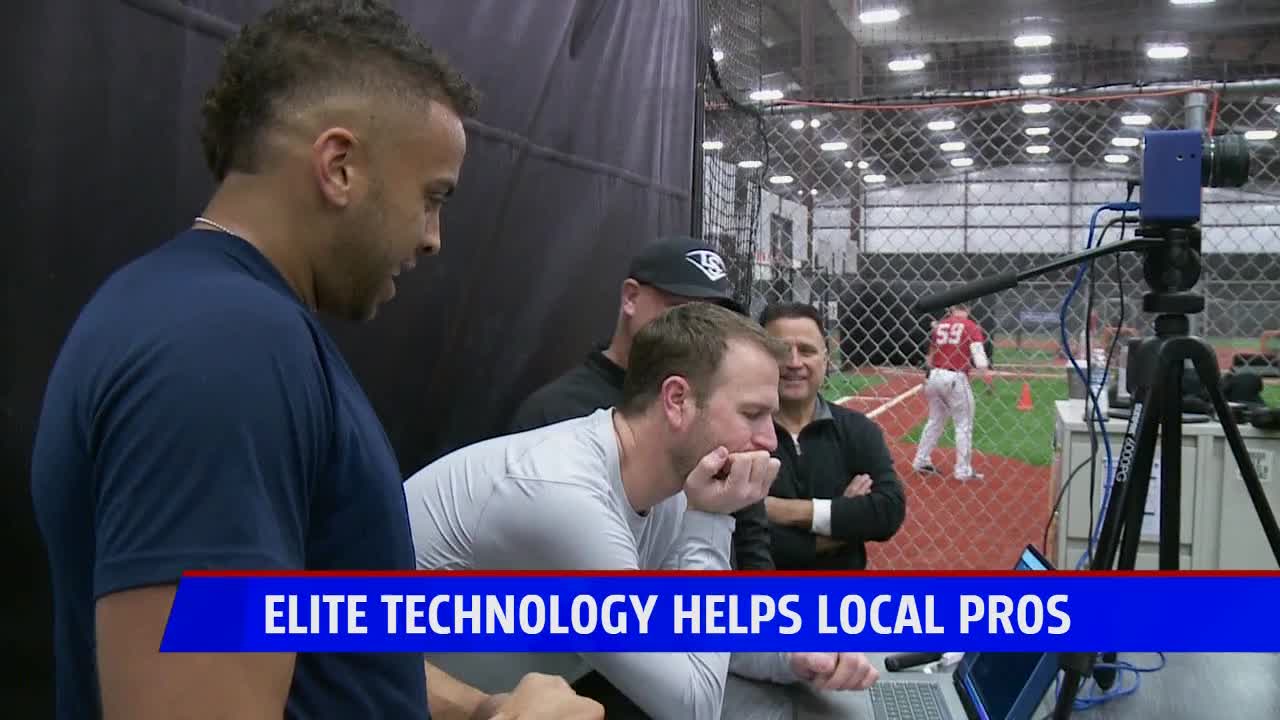 WYOMING, Mich. — Pitchers and catchers are reporting for spring camp this weekend. For former Grand Rapids Christian and Western Michigan University standout Kurt Hoekstra, that means heading back to Florida with the Atlanta Braves, but he does enjoy the little time he gets at home.

"My family is all here," Hoekstra said, "I'm gone for seven months out of the year, so to be able to come home and work out here and spend time with them is really nice."

And this was an important winter for Hoekstra as he starts just his second season as a pitcher after being drafted in 2015 as a position player.

"It was quick," he said, "mentally it was kind of tough at first, because I knew I wasn't where I wanted to be, but I love it now. I'm glad it happened like this."

That is where Mike Paul and Elite baseball come in. They have some of the new technology at their facility on Clyde Park in Wyoming.

"That is the Edgertronic camera and the Rapsodo," Paul said on the technology, "we combine the two because we find that we can teach pitcher different grips we can teach them to create different movements on them on their breaking ball, fastball, different velocities. At the end of the day, when we use the camera and we align that feel with the movement of the pitch, they are able to master the pitch quicker."

"It's incredible," Hoesktra said, "I can see how every single pitch is coming off my hand and if something doesn't feel right, I can look at that and I can know why it is how it is."

"Lefties last year hit about .350 off me while righties hit like .180, so I figured I should get something to get lefties out a little better," Mekkes laughed.

Mekkes, who pitches in the Cubs organization, says the birth of the new pitch has been helped by the Elite technology.

"Typically, in my past off-seasons, I haven't had them so I've kind of just been throwing. I didn't really know if it is good except for my blind eye and the way it threw, so it is better having all this, knowing there's data to back it up like that was a good pitch versus that wasn't so good."

As Hoekstra and Mekkes head to Florida and Arizona this week to participate in big league spring training, they both are excited about what they will be able to show the big league brass.

"I feel great," Hoekstra added, "I feel like I am more prepared now. I have a year to go off of and build and change, where as last year I was kind of just go in and see what happens. This year, I have more of a plan and focus on some things."

"I feel great, this is the most work I've ever done in an off-season leading up," Mekkes said, "I've definitely done more body work and everything like that here than I've ever done, so I couldn't be more excited."