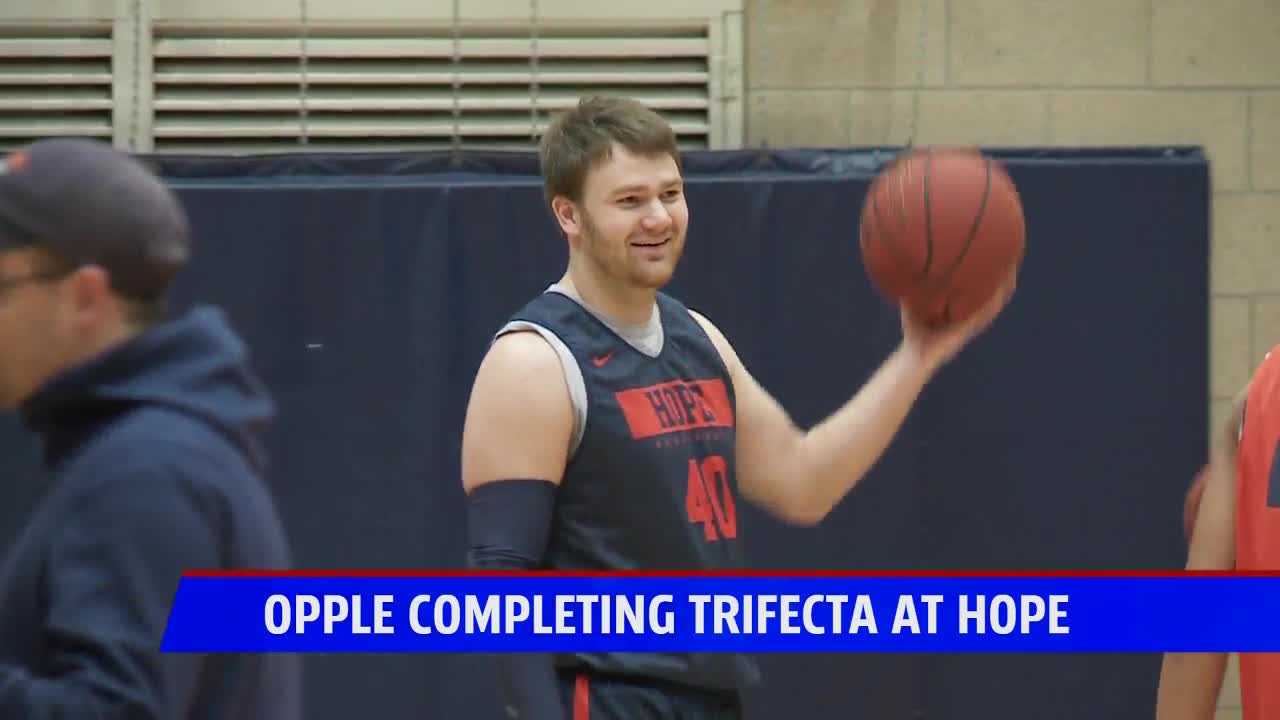 HOLLAND, Mich. — Mason Opple was a three sport star at Hudsonville High School and recruited by colleges in football, basketball and baseball before ultimately deciding he would play baseball at Hope College.

"I haven't touched a bat since May," Opple said.

It's pretty hard to find a college athlete that goes eight months without doing something for their sport. Then again Opple is not like most college athletes.

His sophomore year at Hope, football coach Peter Stuursma recruited him to play football. He immediately became the starting quarterback, and three years and 31 consecutive starts later he was the MIAA Offensive player of the Year.

Now in his final year, Opple has joined the basketball team.

"The first semester that I was here, we kind of joked about it: Hey, if we think we could ever make this happen it would be something kind of cool," Opple said. "Years went on, and this is my last year, and we met during football season, and he (Hope basketball coach Greg Mitchell) said, 'Hey this is the last shot to give it a go.' Hoops is one of the most fun sports out there, but his biggest thing was he didn't want it to interfere with football, so football ended. We met again. We decided to give it a go and it has been nothing but fantastic. I love the guys, love the coaches. It has been a ton of fun."

"Division III athletics is all about living through some of these opportunities," Hope men's basketball coach Greg Mitchell said. "I didn't want him to regret when he's 30 and looking back, 'I wish I would have.' And so we wanted to give him an opportunity, and he has been nothing but an asset to us."

Opple made his hoops debut in the team's eighth game, and his minutes and production have increased with each game.

"I told coach Mitch day one I didn't want this to be something cool," Opple said. "I want to be here to help the team, and he felt that I could bring that to the table. So I am working every day to find any way I can to make this team better."

As for his free time, there isn't much of that right now, but that's all right with him.

"I knew that it was going to be time-consuming," Opple said. "Sure, I could have sat back and said it is my last semester of college, I'll play baseball when that comes around .... When it is all said and done, I'd rather be able to say I gave it a shot I played hoops and gave it everything I had."