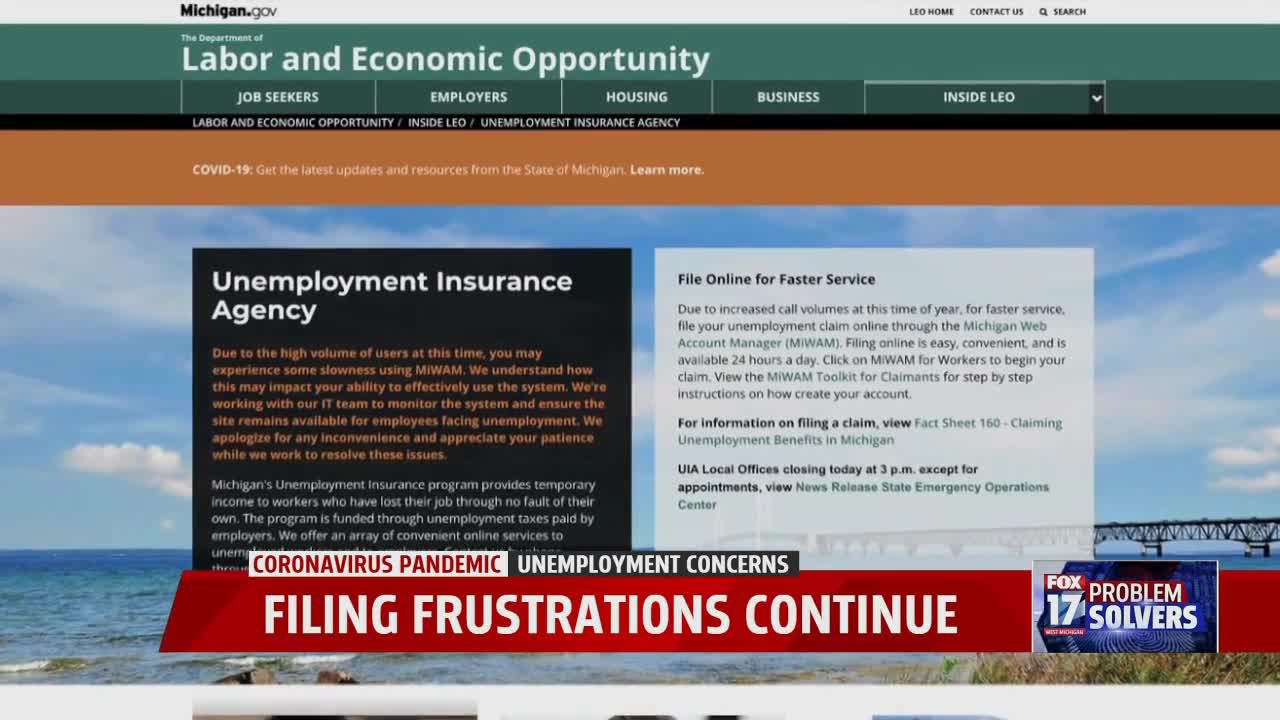 GRAND RAPIDS, Mich. — Even a month after filing for unemployment, people all over the state are still having issues with the online and phone systems.

They either can't get in, they get kicked out, or they still haven't been paid.

“So finally I was watching the news, saw the Problem Solvers line, I said, ‘you know what, I’m just gonna throw a Hail Mary here nothing else is working," said Randy Anderson.

“After two or three times doing that, it just kicks you out and it shuts you down for 30 minutes,” he said.

The phone likes are full, the chat doesn't work, and if people do get through they're often disconnected - or their filing information is said to be inaccurate.

“You’re losing sleep, you’re not eating, you’re stressed out trying to figure out what’s going to happen," said Anderson, "and we’re all in the same boat and I understand that but yea, I don’t know what to say."

Anderson is currently a live-in caregiver for his 96-year-old mother. After starting a new job in Battle Creek, his company laid him off because of the coronavirus.

He's tried to file every day since March 20th. He's already set up a user ID and a password, but still cannot get in.

He gets a prompt online that asks him to verify his social security number and date of birth, saying the information is not entered correctly. He's also sent a letter to the fraud department not sure if he's become a victim.

Krizan worked for a roofing company in Grand Haven. While she's been able to file, she still cannot verify.

“They said you can get on by chat, you can send messages I’ve done all those things every single day,” she said.

After waiting on hold one day, she used the callbackl feature. Finally, four hours later, a live person was on the other end.

“He said ‘call back in the morning to make sure this worked.’ And I was like ‘please don’t make me call that number again' and we laughed. I called back this morning and I can’t get through again and my stuff is back to those ineligible weeks,” said Krizan.

Her husband has an essential job so he's still working, but their bills are piling up without her income.

“I don’t know the fix but they need to get more phone lines going. Something has to happen because no one’s getting through it’s so rare.”

Katie and Randy both understand that thousands are trying to file at one time. But the money is still not in their accounts nearly a month later.

“You know, when are we gonna be able to pay the bills? Four weeks the bills are adding up," she said.

“At this point I have no income," said Anderson, "I’m trying to take care of my mom, I’m literally living with her and it’s just a really frustrating and exasperating situation.”

The state says it has more than 100 people on a technical support team, so if you're having similar online issues you can email State Coronavirus E-Mail Helpline at leo-coronavirus@michigan.gov.

You will get an auto-reply but we're told a real person will email you back.

The state also says more than a million people have filed since March 15th and it's already handed out $745 million to 720,000 people.