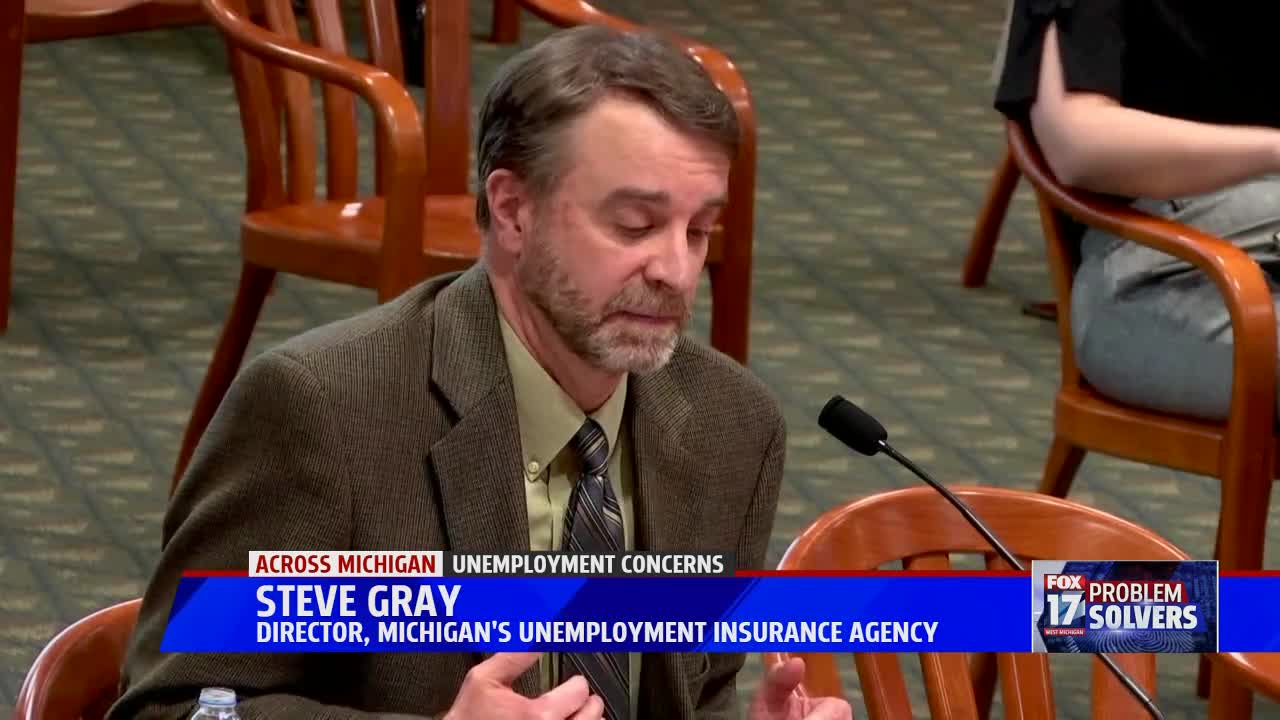 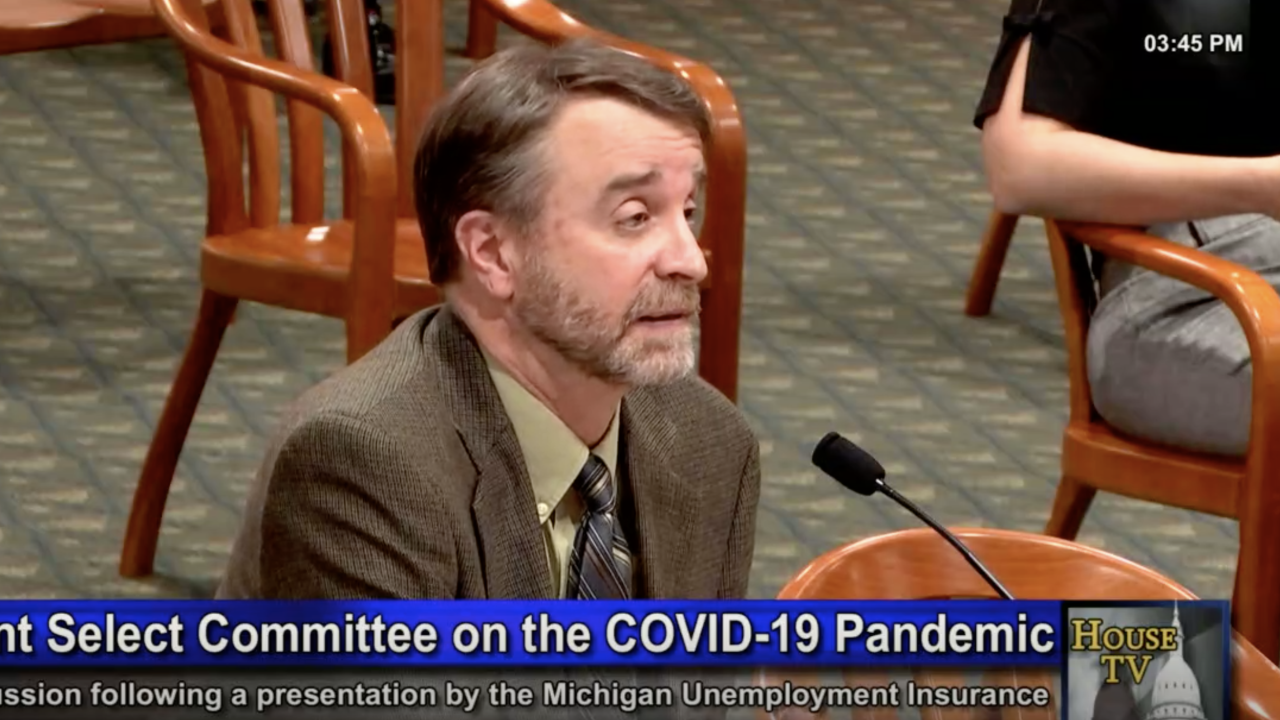 GRAND RAPIDS, Mich. — The Michigan Unemployment system is overloaded, from dropped calls to people still waiting for money. It seems the agency was not prepared for massive layoffs.

Frustrated workers are now calling their lawmakers, who are taking those same questions to the man in charge of the agency.

“It hit us like lightning," said UIA Director Steve Gray. “My staff has worked mandatory overtime day and night--many seven days a week--and I’m extremely proud of them.”

Last Wednesday, Gray went before the Joint Select Committee On The COVID-19 Pandemic. The bipartisan group had a lot of questions for his agency.

“Business owners, case workers, are they all calling into the same line?" asked one lawmaker.

“You said it would take weeks to get a response from those MIWAM messages. Is it still weeks?" asked another.

“So, I’m a new hire, and I’m doing the best I can on phones, but I naturally need more backup--either a mentor or supervision. What does that look like now that they’re working remotely?” questioned a third.

One question that was asked several times: "Did the governor warn the agency that it was about to be flooded with claims before she shut businesses down?"

If so, when did the agency know and was it enough time to prepare?

“When did the governor contact you so you and your team could prepare for that March 23rd order?” asked Senator Aric Nesbitt of Michigan's 26th District.

“So, were you given heads up on the day of, the day before, a few hours before when the news hit afterwards?" asked Nesbitt.

“If you look at the date of the executive order which came out, which I believe was March 15th, we were already in conversations prior to that. We had an executive order that came out that addressed the COVID eligibility requirements," said Gray.

“So you were prepping a week before then?” asked Nesbitt.

“I think you know, going back and looking at the timeline, we had seen the governor take action with restaurants, so we’d already seen that effect," said Todd Cook, LEO's director of legislative affairs. "Obviously none of us live in a bubble, and the healthcare situation was quickly changing, and we’re not healthcare experts. We knew it was gonna have an impact."

Another big issue that FOX 17 viewers mention is finally getting through to the UIA phone system but people's calls are being dropped.

"There’s so many people that are saying that they call, they’re on the line, they get through 2.5 hours or longer, there’s some kind of prompt that says someone’s about to get through to them and then it hangs up," said Michigan District 63 State Representative Matt Hall. "Have you heard why that seems to be happening so frequently?”

“I had not heard that that was happening, that people were having - that people were making it into hold - who were actually sitting on hold and not getting a call back. That’s definitely something that I need to look into," said Gray.

But two weeks earlier, that issue was brought up to the agency during a FOX 17 Facebook Live with Deputy Director Kimberly Berry.

“Last time we spoke," said Problem Solvers' Ryan Cummings, "you said once people are in the queue they will be answered by the end of the day and workers won’t leave until everyone in the queue is taken care of. People say that’s a lie, and it’s not working, when in fact they waited on hold for 8 to 10 hours and then just end up getting hung up on.”

"That’s not the case from our side," said Berry during the Facebook Live on May 1. "Everyone in that queue, I’m watching it myself, and so at the end of the day does get service. I have been also seeing that people indicate they’re not able to get in the queue. They stay on hold and get hung up before they make it there, so they may not have gotten to the part that I’m speaking of to where they’re actually in the queue.”

FOX 17 gets dozens of unemployment emails a day asking for help.

Rachael wrote, "Please help. I have kids to feed and take care of. My $7 a month of food stamps isn't doing me justice. I'm out of resources."

It's also frustrating for Robert, who says, "almost 2 months later with NO income and I’ve sent multiple of letters/emails and can’t get through by phone."

“You say there’s 134,000 people, roughly, it feels like most of them are in my district - I share them with Rep. Carter (laughter)... 6-to-8 weeks, some of them still haven’t gotten it, what do I tell them? How long are they gonna have to wait?” asked District 101 State Representative Jack O'Malley.

The UIA has pulled workers from all over state government to help with claims. More than 1,750 people are addressing customers' concerns as of May 13th. But a big concern for the state is training them fast enough to help the main issues.

“Because what happens is, when you put those basically untrained telephone contractors on the phone they can take claims, which is important, they can help with lockout issues and they can tell people what their status of their case is. Most of the people who are calling are calling because they haven’t been paid and so they can’t solve that problem," said Gray.

Money comes from the state unemployment taxes of reimbursements paid by employers. Workers do not contribute to it.

Before the pandemic, the fund has $4.6 billion and as of April 16th, Gray said it's down to $4.2 billion. The majority of the money being paid out now is pandemic assistance from the federal government.

“My question to you is, what can the legislature do either by changing law, providing more access to funding, what can we do to help?” asked a member of the committee.

Gray's answers ranged from adding new rules for employers during the base period to working with businesses on employer-filed claims.

“We will probably need legislative action on codifying the extension from 20 to 26 weeks.”

The UIA agrees that the system needs and upgrade and has to be more user-friendly.

Gray says the department is talking with companies about how to improve the call center and is looking into a text message option.

UIA is also working with Microsoft on a chat bot to take some pressure off of the phone system.

But no matter the struggles he says he's doing the best he can.

“You don’t have to feel sorry for me," said Gray. "I’ve lost 10 pounds and I sleep about five hours. That’s what my life has been committed to is paying people that are eligible.”

Lawmakers will hold a similar hearing Thursday with the UIA director's boss.

The agency launched a new portal where lawmakers can check on claims and help proviude updates. So if you're still having issues contact your state senator or write to your state representative.

If you do get through to UIA and choose the callback option, your caller ID will show an "866" number.