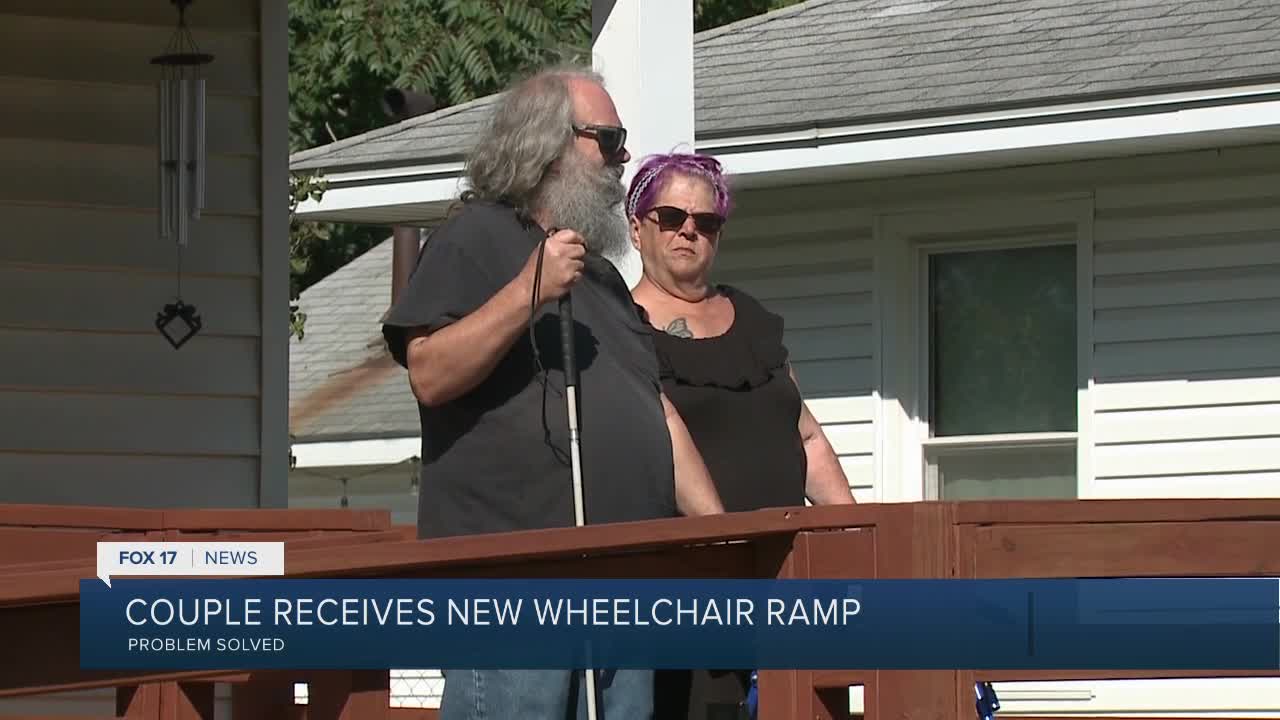 WYOMING, Mich. — A disabled, Wyoming couple has a new ramp after they say, they were victims of a bad contractor. A Kentwood-based contractor stepped up to repair the faulty deck free of charge.

Susan and Rick Winkle first contacted the FOX 17 Problem Solvers about a month ago after they contracted SOS Home Rehab to build a ramp designed for their mobility equipment. Rick is considered legally blind while wife Susan needs a walker or wheelchair to get around.

The couple says the owner of SOS Home Rehab subcontracted the job, which took four months to complete. The job cost them $5,800.

Once finished, Disability Advocates of Kent County determined the ramp did not comply with Section 1010.9.1 or 1010.9.2 of the Michigan building code regarding edge protection. In fact, Disability Advocates found no edge protection was present, posing a problem to the Winkles with their usage of mobility devices. It was also determined the ramp's hand-rail was not suitable for a legally blind resident who would find it difficult to navigate the ramp. The inspection also found nails were not 'fully secured, which is not only unsightly but a major tripping hazard.' The warping boards also increased 'the chance of causing a fall during use.'

After the original story aired, Green Shield Home based in Caledonia reached out to FOX 17, asking if the company could repair the work free of charge.

"My initial reaction was, I was sad and I was appalled. It’s not right to do that to people," said Dana Jefferson, owner of Green Shield Home. "It might as well not have been built at all."

"It really has brought my faith in humanity back," said Susan.

"I’m very thankful because it makes me feel good. It makes everyone in the company feel good to be able to do something like this, to help them," said Jefferson.

The couple says they are still out the $5,800 for the original job. The Winkles tell FOX 17 SOS Home Rehab did offer to fix the job but only if the original article was taken down. They also told the couple they would have to pay $500 for additional materials to correct the job.

SOS Home Rehab maintains it is not responsible for the work because it was subcontracted, despite the checks made out to the company.