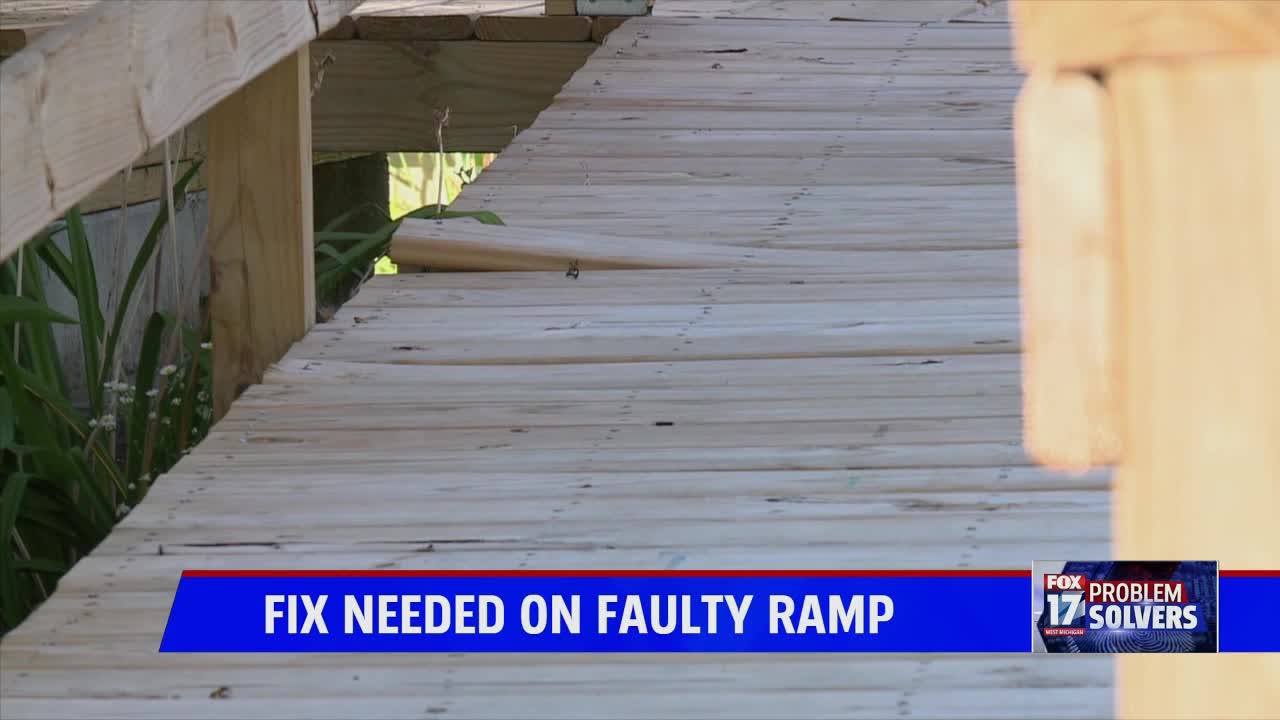 A disabled couple says the ramp built by a local contract is 'unsafe' and can't use the ramp with their wheelchair, walkers, or canes.

Rick and Susan Winkle hired Shane Sarver of SOS Home Rehab, based in Caledonia. They hired Sarver on October 21, 2019, paying in total nearly $5,800 for the job.

Susan uses a walker and wheelchair due to Parkinson's disease and recently completed a program at Mary Free Bed for her rehabilitation. Rick is legally blind and can only see shadows.

The Winkle's say the work took until February 2020 to complete. Once it was finished, it only took a few months before wood began separating, nails began poking out, and boards began protruding out from the structure of the ramp.

The couple says EMS didn't consider the ramp safe enough to use when they were called for a medical emergency. The stretcher, they say, was getting caught on faulty boards.

When Disability Advocates of Kent County were called out to inspect the work, they found that the ramp does not comply with Section 1010.9.1 or 1010.9.2 of the Michigan building code regarding edge protection. In fact, they found no edge protection was present, posing a problem to the Winkle's with their usage of mobility devices. It was also determined the ramp's hand-rail was not suitable for a legally blind resident who would find it difficult to navigate the ramp. The inspection also found nails were not 'fully secured which is not only unsightly but a major tripping hazard.' The warping boards also 'increases the chance of causing a fall during use.' Additionally, the hand-rail on a secondary side deck does not comply with Section 1014.7 of the Michigan building code regarding hand rail clearance.

"The boards, if I was using my walker could make me fall as I'm walking," said Susan. "My electric wheelchair, it can cause damage to that."

Rick says he felt the work done on it initially was done correctly, but he couldn't see for himself the finished product.

"I believe that he did a very poor workmanship. I couldn’t see that earlier," said Rick.

The couple says they have made 'countless' calls to the contractor, without any remediation. When they spoke to Shane Sarver, the contractor they hired, they were told the responsibility fell to the sub-contractor who actually completed the work. Neither the contractor nor the subcontractor have fixed the issues with the work done.

FOX 17 contacted Sarver twice over the phone and once attempted to contact him at his last known address connected to his business. Despite the attempts, he never contacted our team back for to express his side.