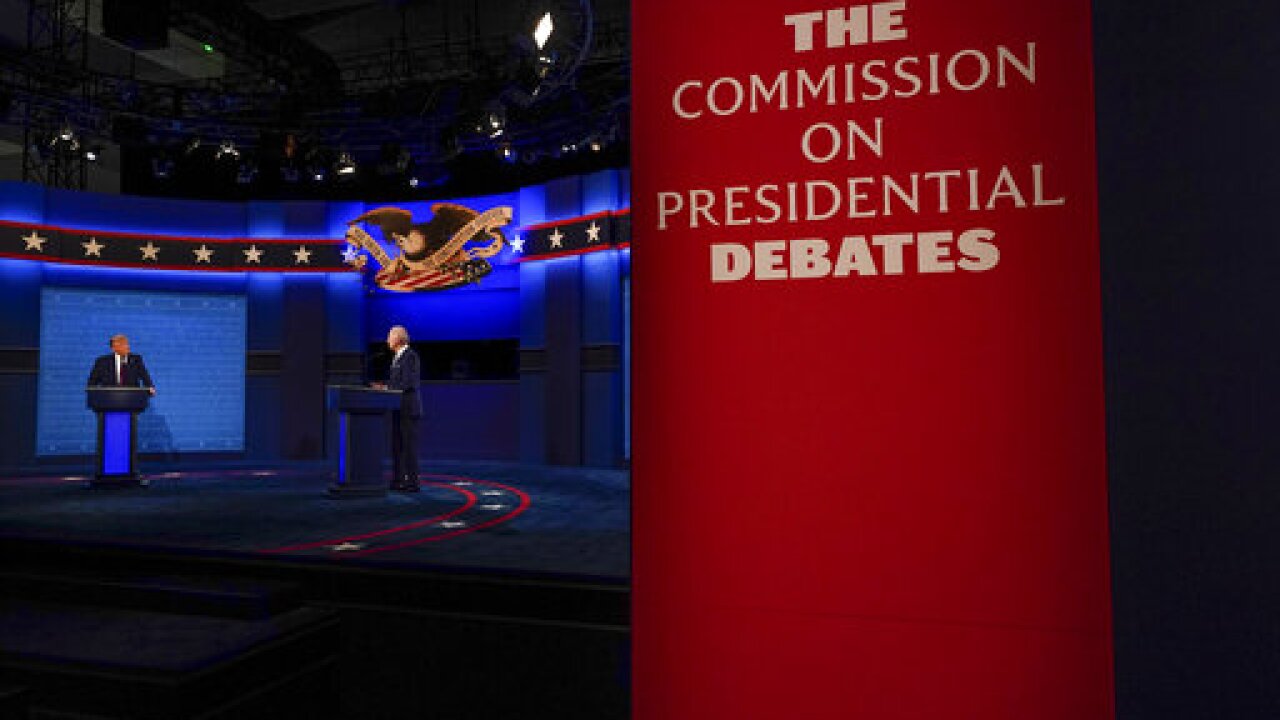 WASHINGTON (AP) — President Donald Trump and Democratic rival Joe Biden sparred Tuesday in their first of three debates, hoping to sway undecided voters planning to cast ballots by mail and in person in the final weeks leading up to the Nov. 3 election.

A look at how their statements from Cleveland stack up with the facts:

BIDEN: “The fact of the matter is violent crime went down 17%, 15%, in our administration.”

THE FACTS: That’s overstating it.

Overall, the number of violent crimes fell roughly 10% from 2008, the year before Biden took office as vice president, to 2016, his last full year in the office, according to data from the FBI’s Uniform Crime Reporting program.

But the number of violent crimes was spiking again during Obama and Biden’s final two years in office, increasing by 8% from 2014 to 2016.

More people were slain across the U.S. in 2016, for example, than at any other point under the Obama administration.

THE FACTS: Not quite. The statistics in Chicago are true, but those numbers are only a small snapshot of crime in the city and the United States, and his strategy is highlighting how data can be easily molded to suit the moment. As for New York, Trump may have been talking about shootings. They are up in New York by about 93% so far this year, but overall crime is down about 1.5%. Murders are up 38%, but there were 327 killings compared with 236, still low compared with years past. For example, compared with a decade ago, crime is down 10 percent.

An FBI report released Monday for 2019 year of crime data found that violent crime has decreased over the past three years.

TRUMP: Dr. Anthony Fauci “said very strongly, ‘masks are not good.’ Then he changed his mind, he said, ‘masks, good.’”

THE FACTS: He is skirting crucial context. Trump is telling the story in a way that leaves out key lessons learned as the coronavirus pandemic unfolded, raising doubts about the credibility of public health advice.

Early on in the outbreak, a number of public health officials urged everyday people not to use masks, fearing a run on already short supplies of personal protective equipment needed by doctors and nurses in hospitals.

But that changed as the highly contagious nature of the coronavirus became clear, as well as the fact that it can be spread by tiny droplets breathed into the air by people who may not display any symptoms.

Fauci of the National Institutes of Health, along with Dr. Robert Redfield of the Centers for Disease Control and Prevention, Dr. Steven Hahn of the Food and Drug Administration and Dr. Deborah Birx of the White House coronavirus task force, all agree on the importance of wearing masks and practicing social distancing. Redfield has repeatedly said it could be as effective as a vaccine if people took that advice to heart.

TRUMP, on coronavirus and his campaign rallies: “So far we have had no problem whatsoever. It’s outside, that’s a big difference according to the experts. We have tremendous crowds.”

THE FACTS: That’s not correct.

Trump held an indoor rally in Tulsa in late June, drawing both thousands of participants and large protests.

The Tulsa City-County Health Department director said the rally “likely contributed” to a dramatic surge in new coronavirus cases there. By the first week of July, Tulsa County was confirming more than 200 new daily cases, setting record highs. That’s more than twice the number the week before the rally.

TRUMP, addressing Biden: “You didn’t do very well on the swine flu. H1N1. You were a disaster.”

THE FACTS: Trump frequently distorts what happened in the pandemic of 2009, which killed far fewer people in the United States than the coronavirus is killing now. For starters, Biden as vice president wasn’t running the federal response. And that response was faster out of the gate than when COVID-19 came to the U.S.

Then, the Centers for Disease Control and Prevention’s flu surveillance network sounded the alarm after two children in California became the first people diagnosed with the new flu strain in this country.

About two weeks later, the Obama administration declared a public health emergency against H1N1, also known as the swine flu, and the CDC began releasing anti-flu drugs from the national stockpile to help hospitals get ready. In contrast, Trump declared a state of emergency in early March, seven weeks after the first U.S. case of COVID-19 was announced, and the country’s health system struggled for months with shortages of critical supplies and testing.

TRUMP, addressing Biden on U.S. deaths from COVID-19: “If you were here, it wouldn’t be 200,000 people, it would be 2 million people. You didn’t want me to ban China, which was heavily infected.... If we would have listened to you, the country would have been left wide open.”

THE FACTS: This accusation is off the mark. Biden never came out against Trump’s decision to restrict travel from China. Biden was slow in staking a position on the matter but when he did, he supported the restrictions. Biden never counseled leaving the country “wide open” in the face of the pandemic.

Trump repeatedly, and falsely, claims to have banned travel from China. He restricted it.

The U.S. restrictions that took effect Feb. 2 continued to allow travel to the U.S. from China’s Hong Kong and Macao territories over the past five months. The Associated Press reported that more than 8,000 Chinese and foreign nationals based in those territories entered the U.S. in the first three months after the travel restrictions were imposed.

Additionally, more than 27,000 Americans returned from mainland China in the first month after the restrictions took effect. U.S. officials lost track of more than 1,600 of them who were supposed to be monitored for virus exposure.

Dozens of countries took similar steps to control travel from hot spots before or around the same time the U.S. did.

BIDEN: Trump will be the “first (president) in American history” to lose jobs during his presidency.

THE FACTS: No, if Trump loses re-election, he would not be the first president in U.S. history to have lost jobs. That happened under Herbert Hoover, the president who lost the 1932 election to Franklin Roosevelt as the Great Depression caused massive job losses.

Official jobs records only go back to 1939 and, in that period, no president has ended his term with fewer jobs than when he began. Trump appears to be on track to have lost jobs during his first term, which would make him the first to do so since Hoover.

THE FACTS: Better check the tape. While Trump had called for the Big Ten conference to hold its 2020 football season, he wasn’t the only one. Fans, students, athletes and college towns had also urged the conference to resume play.

When the Big Ten announced earlier this month that it reverse an earlier decision to cancel the season because of COVID-19, Trump tweeted his thanks: “It is my great honor to have helped!!!”

The conference includes several large universities in states that could prove pivotal in the election, including Pennsylvania, Iowa, Michigan, Minnesota, Ohio and Wisconsin.

BIDEN, on Supreme Court nominee Amy Coney Barrett: “She thinks that the Affordable Care Act is not constitutional.”

THE FACTS: That’s not right.

Biden is talking about Trump’s pick to replace the late Justice Ruth Bader Ginsburg. Barrett has been critical of the Obama-era law and the court decisions that have upheld it, but she has never said it’s not constitutional. The Supreme Court will hear arguments in the case on Nov. 10, and the Trump administration is asking the high court to rule the law unconstitutional.

THE FACTS: That’s a promise, not a reality.

And as a promise, it’s an obvious stretch.

Trump has been unable to get legislation to lower drug prices through Congress. Major regulatory actions from his administration are still in the works, and are likely to be challenged in court.

There’s no plan on the horizon that would lower drug prices as dramatically as Trump claims.

THE FACTS: Trump is quoting Biden out of context. The former vice president, a graduate of the University of Delaware, did not say he attended Delaware State University but was making a broader point about his long-standing ties to the Black community.

Trump is referring to remarks Biden often says on the campaign, typically when speaking to Black audiences, that he “goes way back with HBCUs,” or historically Black universities and colleges. Biden has spoken many times over the years at Delaware State, a public HBCU in his home state, and the school says that’s where he first announced his bid for the Senate – his political start.

“I got started out of an HBCU, Delaware State — now, I don’t want to hear anything negative about Delaware State,” Biden told a town hall in Florence, South Carolina, in October 2019. “They’re my folks.”

Biden often touts his deep political ties to the Black community, occasionally saying he “grew up politically” or “got started politically” in the Black church. In front of some audiences, he’s omitted the word “politically,” but still with a clear context about his larger point. The statements are all part of standard section of his stump noting that Delaware has “the eighth largest Black population by percentage.”

A spokesman for the Delaware State University, Carlos Holmes, has said it took Biden’s comments to refer to his political start, saying that Biden announced his bid for the U.S. Senate on the DSU campus in 1972.

Biden’s broader point is push back on the idea that he’s a Johnny-Come-Lately with the Black community or that his political connections there are owed only to being Barack Obama’s vice president.