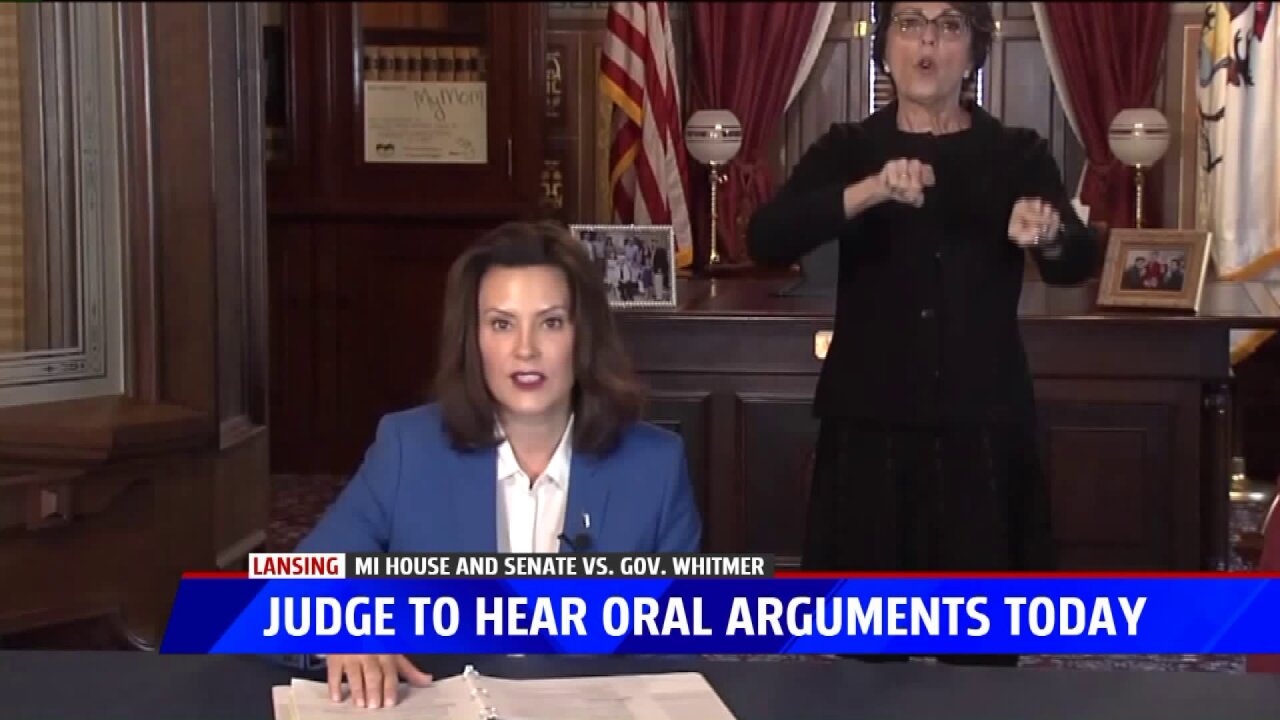 The lawsuit states Governor Whitmer is over-reaching her powers by extending Michigan's Emergency Orders, however some law experts don't agree.

General Michael McDaniel is the Associate Dean of the Lansing Campus of Western Michigan University- Cooley Law School, and a former state and federal security and emergency adviser.

General McDaniel explains that at the judges ruling Friday it is likely that her opinion will require either a declaration on the limit of the power of the legislature, or that the Governor's power will be limited.

Essentially whomever Judge Stephens rules in favor of Friday, the other party's powers will be limited.

There are two arguments the Republican-led House and Senate's lawsuit is based on.

The first argument is based off the Emergency Powers of the Government Act of 1945.

Lawmakers say this act applies only to local emergencies such as a city, or county, not the entire state.

General McDaniel says that's illogical and there is nothing in the statute's language that suggests the Governor's power is limited to less than the entire state.

"The legislature specifically declared in that statute, 'It is hereby declared to be the legislative intent to invest the governor with sufficiently broad power of action, and the exercise of the police power of the state to provide adequate control over persons and conditions.' And it says. 'The provisions of this act shall be broadly construed'," explains General McDaniel.

The second argument of this lawsuit is based off the Emergency Management Act of 1976, General McDaniel says of the two arguments this one is stronger.

Lawmakers say that Whitmer must have legislative approval to continue extending the State of Emergency act beyond 28 days.

General McDaniel says this is not true, and the act clearly gives Whitmer the powers to continue a statewide State of Emergency during this pandemic for as long as reasonably necessary.

The General also points out that these acts were created 40-to-70 some years ago and on public health.

The idea that the State is responsible for the public health of *all of its citizens.

"There are times, circumstances, and this seems to be one of them, where individual liberties have to be subsumed to the greater public health. Only for the period of time that we have that disaster, that event, but you know, this is certainly still ongoing at this point. And when it's ongoing, great discretion is given to the to the Executive Branch for whatever that period of time may be, and for whatever type of remedy may be necessary, says General McDaniel.

Overall General McDaniel says it seems likely that Governor Whitmer will win the lawsuit Friday, based on the arguments above.

However, only time will tell for sure.

The lawsuit oral arguments are taking place via ZOOM, and you can see them live on YouTube by searching for the Michigan Court of Claims' channel.