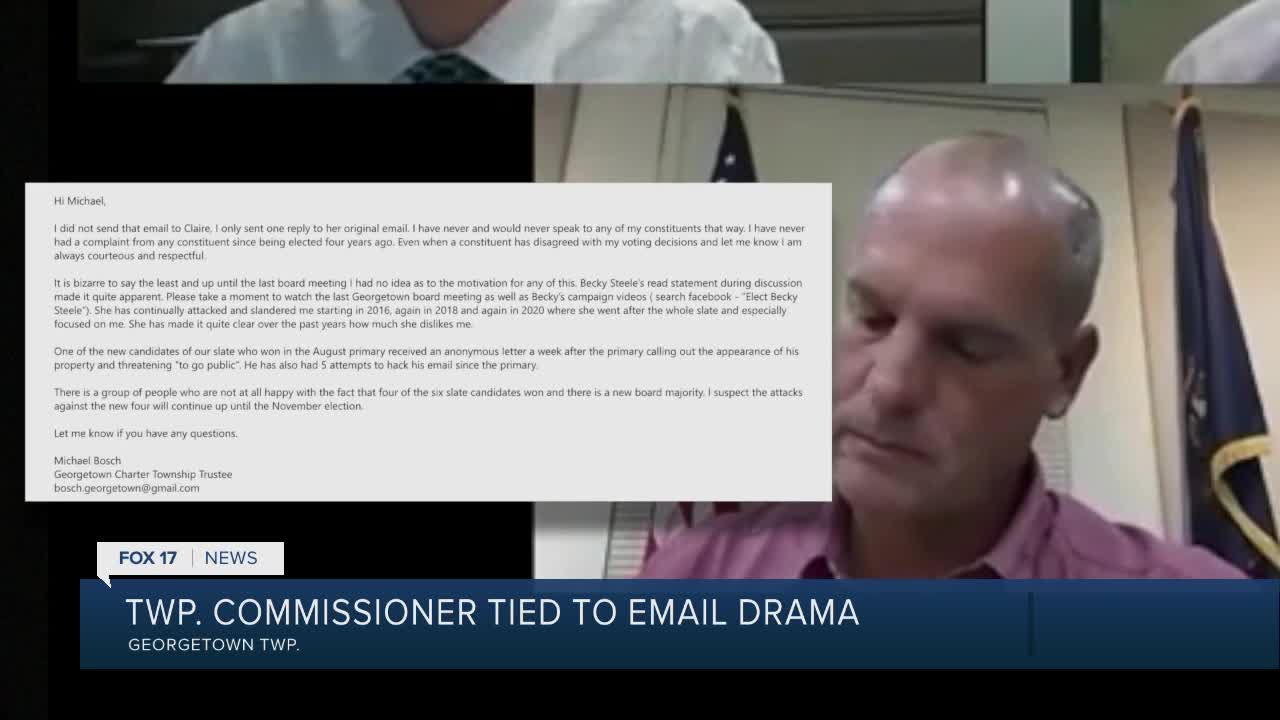 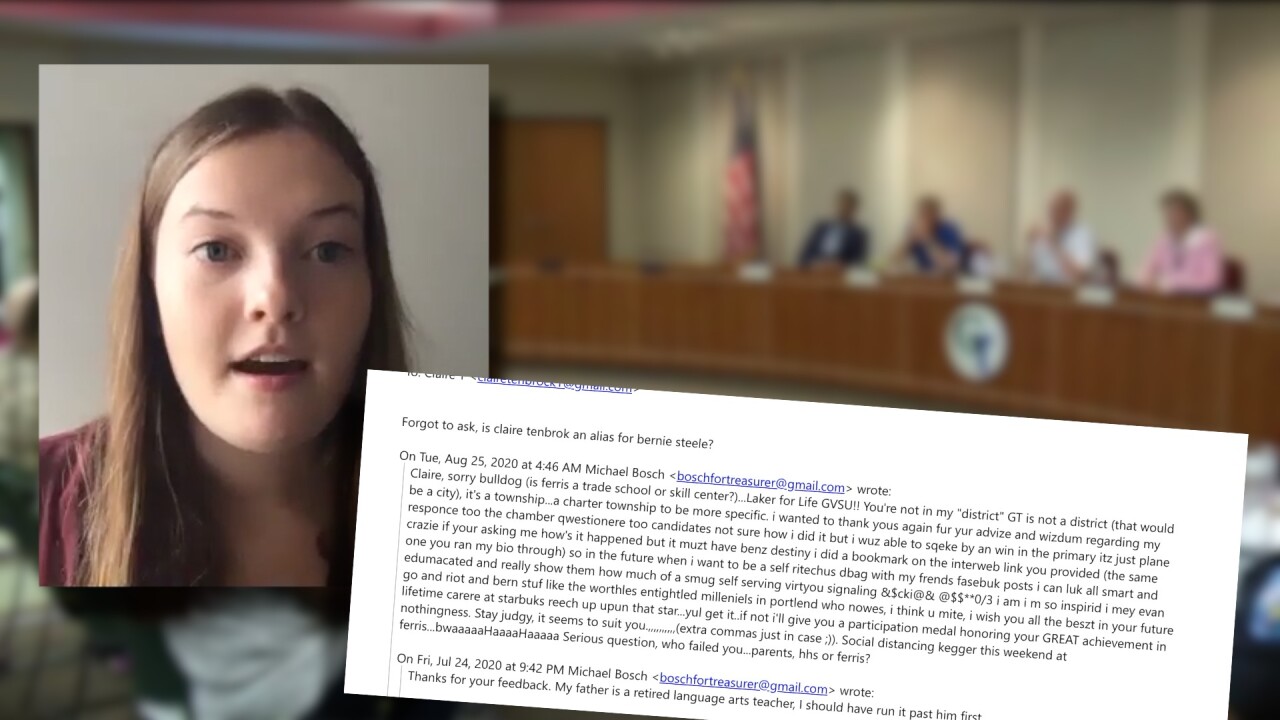 GEORGETOWN TOWNSHIP, Mich. — A 19-year-old woman is trying to get to the bottom of who sent her an insulting email after she reached out to a sitting board member who later said he had been hacked.

At the Georgetown Township board meeting on September 14, a young woman named Claire TenBrock and her friend Emma Post took the time to speak during a portion of public comment.

"I am here speaking on behalf of an email sent from Michael Bosch to constituent Claire TenBrock," Post began.

"Claire tries her best to be informed of the world around her on a global, national, state and local level. She is an avid news reader and frequently emails her representatives."

Post was speaking in regards to an email her friend had received, seemingly from an account belonging to board member Michael Bosch.

"It is absolutely vile that a person in his position would levy such offensive words against a constituent. An elected official should never feel it is appropriate to say such hostile and malicious things," Post said in the meeting.

This discussion stemmed from an email exchange between 19-year-old Claire TenBrock and Michael Bosch that began when TenBrock first messaged Bosch back on July 22. She was writing him in regards to a candidate statement of Bosch's she found on the Grandville Jenison Chamber of Commerce website.

Bosch is currently running for treasurer of Georgetown Township.

“I email my representatives often to check in and see how things are," TenBrock told FOX 17 in an interview.

In the message, she said in part, "I am writing to bring to your attention some grammatical errors that you made in your statement."

She received a response from Bosch just 2 days later, in which he said, "Thanks for your feedback. My father is a retired language arts teacher, I should have run it past him first."

TenBrock says she thought the matter was over, until she received another message appearing to originate from Bosch's same email account. This message sent almost a month later, on August 25.

“The email was purposely spelled wrong. Everything was kind of to be funny,” she told FOX 17.

“He called me a worthless entitled millennial, saying ‘good luck at your future career at Starbucks'."

Pieces of the bizarre message include, "i wanted to thank yous again fur yur advize and wizdum regarding my responce too the chamber qwestionere too candidates not sure how i did it but i wuz able to sqeke by an win in the primary itz just plane crazie if your asking me how's it happened but it muzt have benz destiny [sic]."

TenBrock took offense to lines that included, "i m so inspirid i mey evan go and riot and bern stuf like the worthles entightled milleniels in portlend who nowes, i think u mite, i wish you all the beszt in your future lifetime carere at starbuks reech up upun that star...yul get it..if not i'll give you a participation medal honoring your GREAT achievement in nothingness [sic]."

She received a follow up message just a few minutes later that said, "Forgot to ask, is claire tenbrok an alias for bernie steele?," an apparent reference to another Georgetown Township board member, Becky Steele.

TenBrock said, "He did send an email later saying ‘I must have been hacked' but he never really apologized for it."

Somewhat taken back, TenBrock forwarded the message to other board members. Mr Bosch, who was included on the email, responded saying in part, "I didn't send that email to you... I think someone is messing with me."

“When I asked him what his course of action was to figure out who hacked him, he didn’t respond to that,” TenBrock said.

After she and her friend addressed the board on September 14, board member Becky Steele also spoke on the email in question.

Steele said, “I acknowledge that my colleague Mr. Bosch has denied having sent her the emails in the early morning hours of Tuesday, August 25. That said, I do not believe this denial to be truthful.”

She says the follow up email asking if Claire TenBrock was an alias for Bernie Steele made her believe Bosch had sent the message, thinking it to be from her.

“Four years ago, there was an obsession during my first political campaign with my choice to join some friends in attending a Bernie Sanders rally on the Grand Valley campus,” Steele said in the September 14 meeting.

Mr Bosch reitereated in an email to FOX 17 that he did not send the offending email. Saying in part, "I have never and would never speak to any of my constituents that way... There is a group of people who are not at all happy with the fact that four of the six slate candidates won and there is a new board majority."

For Claire TenBrock, she says she just wants the matter resolved.

“I would just like an apology if he did send the email," she told FOX 17.

"And if he didn’t, he should look into who sent it so this doesn’t happen again and so the security of Georgetown Township isn’t in threat.”