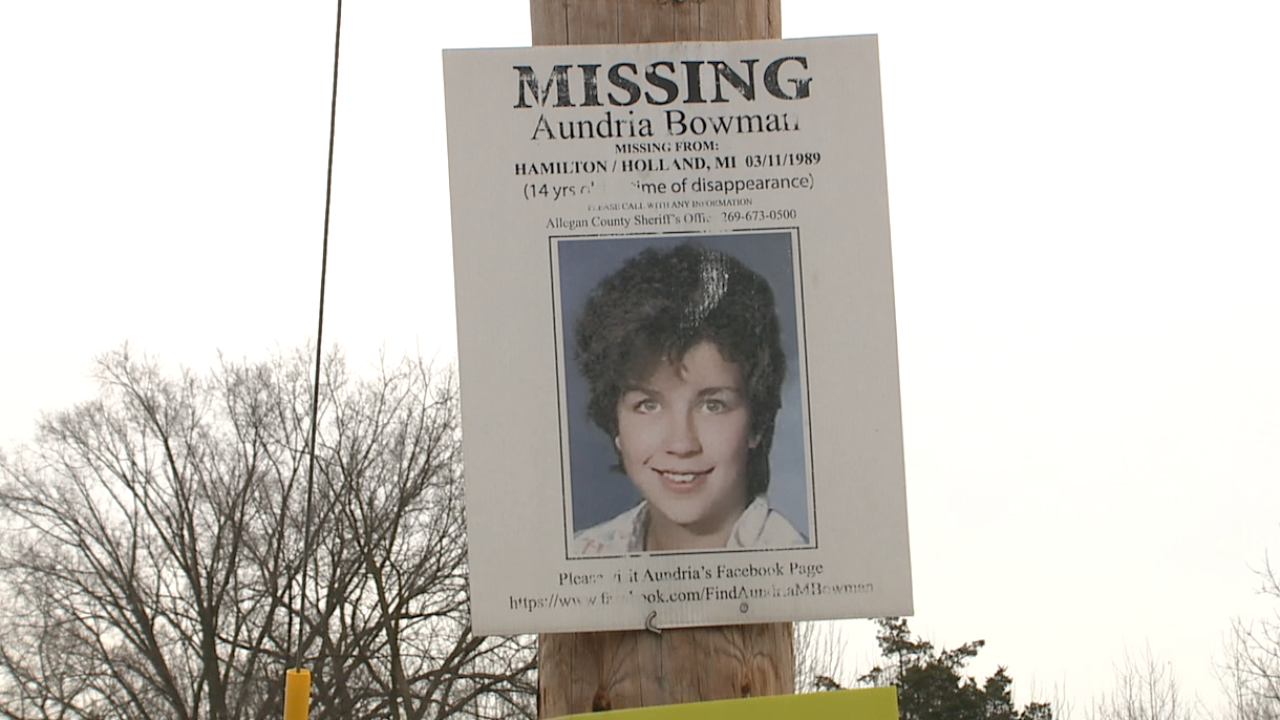 Copyright 2019 Scripps Media, Inc. All rights reserved. This material may not be published, broadcast, rewritten, or redistributed.
Missing poster down the road from Dennis Bowman&#39;s home

(FOX 17) — A man currently in custody for the murder of a Virginia woman has confessed to the murder of his adopted daughter 30 years ago, according to the girl’s mother.

Cathy Terkanian said she talked to a detective in Allegan County Tuesday, who told her Dennis Bowman confessed to killing 14-year-old Aundria Bowman. Aundria hasn’t been seen since 1989.

Terkanian said Bowman confessed under the belief that doing so would prevent him from being imprisoned in Virginia, where he is facing charges for the murder of 25-year-old Kathleen Doyle.

On Tuesday, investigators said they received a tip that Aundria's body was buried in a shallow grave covered by a thin layer of cement at a home on 136th Avenue in Monterey Township. Several law enforcement agencies went there Wednesday morning and located skeletal remains that are believed to be human.

Investigators said it will take several weeks to make a positive identification. Officials wouldn't say if they received a confession from Bowman.

Terkanian says the confession validates a feeling she has had since her daughter's disappearance.

"I’m not just some crazy person that is imagining this. What I thought in his background really was something to stand up and be alerted about."

Doyle was killed in 1980 at her home in Norfolk while her husband was on military deployment.

Bowman was arrested at his Hamilton-area home in November after new forensic evidence was developed by Norfolk police. Investigators have not yet elaborated on what that evidence is.

Bowman’s criminal record dates back decades, including being convicted of a violent attempted rape in West Michigan. He was arrested in 1980 after a young woman said he tried to get her into a nearby wooded area and threatening to “blow a hole right through” her if she didn’t listen to his commands.

He would eventually plead guilty to assault with intent to commit criminal sexual conduct after working out a deal with prosecutors. That case stretched out over nearly two years — including around the time Doyle was killed.

One hearing happened in a Grand Haven courtroom on Sept. 16, 1980 — five days before Doyle’s death. Bowman was not in court that day because his attorney said he was a member of the Army on away on a two-week summer camp requirement.

Investigators are trying to prove that he was actually in Virginia at the time.

In a 1998 breaking and entering case in Ottawa County, Bowman was accused of breaking into a coworker’s home to steal items including her lingerie. Before he was sentenced in that case, he gave a letter to the judge that referenced two daughters, one of which had been missing for nine years.

"I am the father of two lovely daughters, one 25 and the other 11, and feel that being a parent is one of the most important and sobering things a person can undertake,” the letter said.