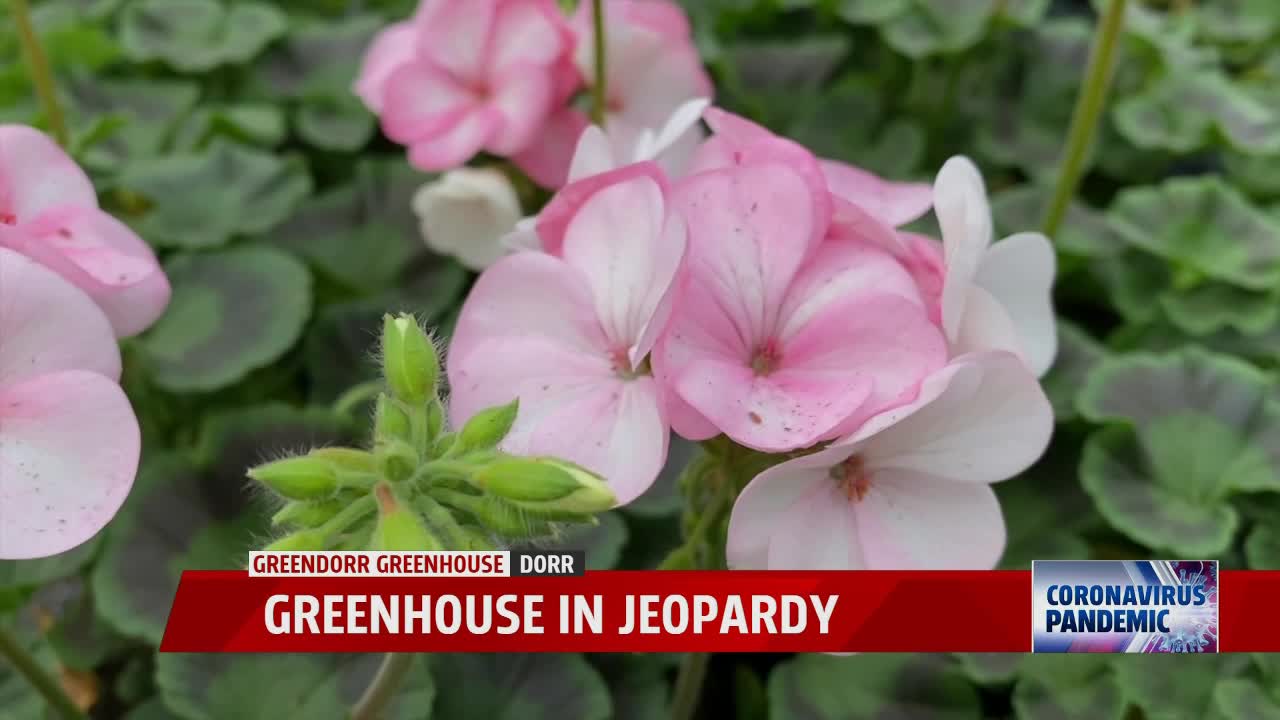 DORR, Mic;h. — Greenhouse businesses are being severely impacted by the Governor's stay-at-home order, during what is typically their busiest time of year.

Under Governor Whitmer's executive order, greenhouses are considered 'essential.' They can continue growing and caring for their plants. With garden centers closed, they have no place to sell their crops to.

GreenDorr Greenhouse in Dorr entirely sells their plants and flowers to wholesale distributors. Those distributors are then responsible for getting them to garden centers across the Midwest. Crops grown here can be sold as far as Nebraska, Iowa, Illinois and others.

"We’re on a skeleton crew. We are maintaining. We’re cleaning the plants. We’re taking the old bloom off. We’re spacing them," said owner Gordon Berkenpas of GreenDorr Greenhouse. "We are doing whatever we can to keep the crop nice and keep the help because if it were to get lifted and we were to start selling, you need the help and you need it now."

Berkenpas starts planting his crops in November, growing them slowly over time. They continue planting throughout spring to scatter the timing of when the crop will be ready.

"We’re totally different than a company that shuts off the printing press or shuts off some kind of machine and comes back in 3 months and turns it back on," said Berkenpas. "We’ve spent all the money for the year upfront. All the money has been spent, and now we are at the point where it needs to come back, and we are on hold. So it’s a big deal to us."

During a usual year, Berkenpas would typically be selling his crops to wholesale distributors by the truckload. They would then begin the process of replanting in the newly-available space made by the recently purchased plants.

"We already know that there is a problem, so we have quit planting but that cost money because we won’t grow as much stuff as we have grown in the past."

According to the U.S. Department of Agriculture, floriculture crops grown in greenhouses totaled a wholesale value of $409 million in 2015. Michigan is the third largest floriculture production state in the country. MSU extension identified more than 650 businesses, producing more than $472 million in ornamental plants.

Springtime is an important season with the large majority of greenhouses doing the bulk of their sales.

Greenhouses across the state hope they will be able to sell by Mother's Day, the biggest holiday of their growing season. In the midst of waiting, owners are urging local representatives to find a solution that would allow their businesses to at least break even and survive past the pandemic.

"My colleagues, other friends, we’re calling our state reps and our senators," said Berkenpas. "They know we’re nervous. We’re scared. It could be a very big deal."

They are also urging lawmakers and the U.S. Department of Agriculture to include them in financial aid packages that are expected to be approved in the future for small business.

When asked what people can do to help, Berkenpas responded that he would like people to pray for a vaccine. He also added that people in the greenhouse and garden industry will do anything asked of them - maintaining social distancing or limiting who is in the stores - to make business at this point possible for the season.