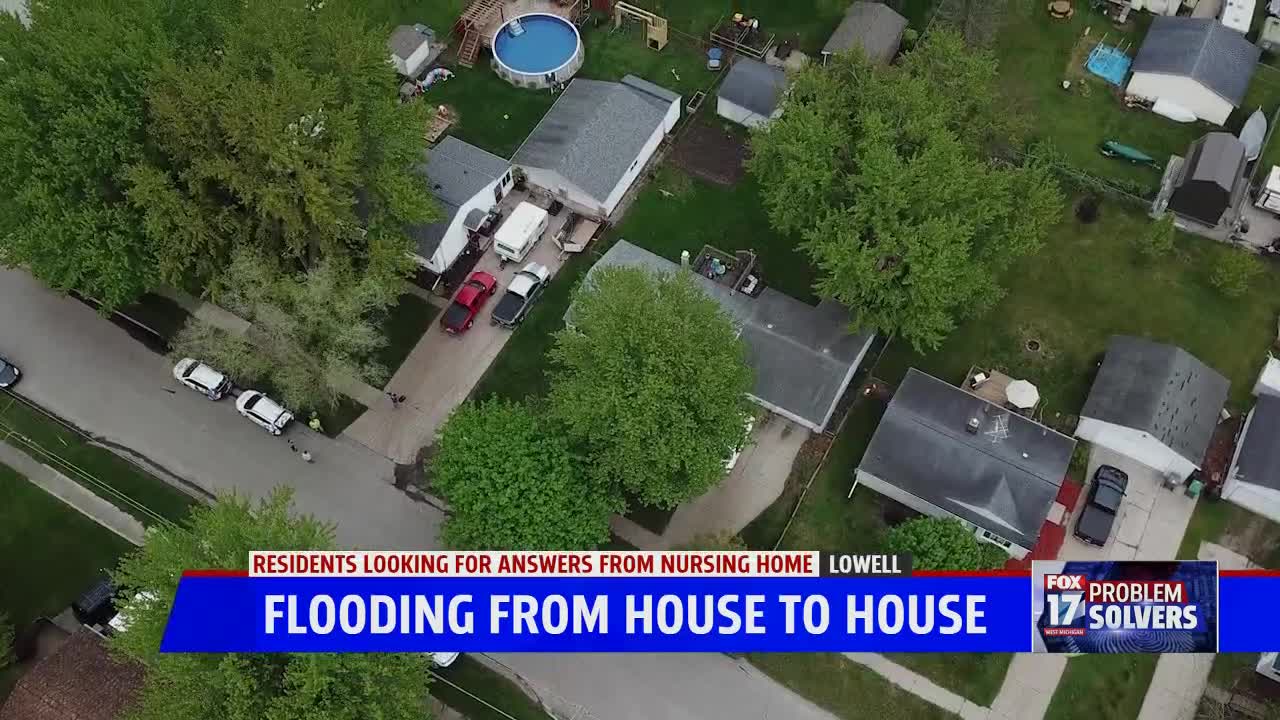 LOWELL, Mich. — A group of neighbors say their Lowell homes are constantly flooded. They believe the issue is tied to a local nursing home and the lack of storm drains nearby.

Three homeowners say their basements flood every time it rains. Another says his yard is always filled with water, but his crawl space only gets damp.

All of the homes are adjacent to Laurels of Kent, a nursing home in Lowell.

"We're getting run-off off their parking lot and roof that's coming in, just flooding our yards," said Doug Krause, one homeowner.

The problem has been an issue for a decade for some of the residents, but it was always manageable. Now, they are dealing with water dozens of time each year, which they attribute to the newly re-capped parking lot at the nursing home. The organization re-paved on top of the existing lot, which did not require any permits.

"They changed the pitch on the parking lot when they repaved it last year to lean towards us now. In all fairness, there is not a city drain until a block down this way, so there is no storm sewer back in their parking lot at all," said Krause.

Residents say they have flooded about 8 times within the past year or so, with the worst happening since November.

"I'm concerned for the foundation primarily and then the black mold issue, if I have one," said Amy Marsman. "Also, what if I ever wanted to sell my home? I could never sell that knowing that this happens. That just wouldn't be fair."

All of their homes flooded earlier this week with the heavy rainfall. It still has not dried out days later.

"Whenever I see heavy rain forecast, it always makes me a little uneasy," said Melody Kastanek. "If it ends up here, it's going to be in my basement."

We reached out to Laurels of Kent about the problem. They provided this statement:

"The Laurels of Kent, like many business owners and homeowners in the City of Lowell and Kent County, have been dealing with the effects of the recent heavy rains and unprecedented levels of ground water. Unfortunately, the collection of water on the Laurels of Kent property and the surrounding properties has been an on-going issue for years. The lack of City storm infrastructure near the properties is the primary problem, as the area relies on surface draining to a nearby creek. All the properties in question contribute to the buildup of water with their watershed from roofs, gutters and yards. In an effort to improve the conditions, over the years we have explored solutions to the drainage issues on our property and our neighbors’ properties. Specifically, we have paid to connect the neighbors’ low lying areas along the property line to one of our yard drains. Although this has improved the drainage problems, without City storm infrastructure, the issue will likely continue during heavy periods of precipitation. We certainly share the frustrations of our neighbors."

We reached out to the city of Lowell, who said the matter is purely a civil issue. They added the infrastructure for the drains is already in place and has been for several decades.

Marsman, who receives the bulk of the water, called the FOX 17 Problem Solvers in hopes of receiving help. She says she has exhausted every avenue, including allowing the nursing home to install a pump that runs off her electricity.

"I'm doing everything that I possibly can do, and I don't know what else that I can do," said Marsman.

Marsman has also considered hiring a lawyer, but says the fees were too high. It included $10,000 base pay, which did not include hiring an engineer or additional lawyer fees.