'Ms Rita' gets the go-ahead to continue backyard swim lessons 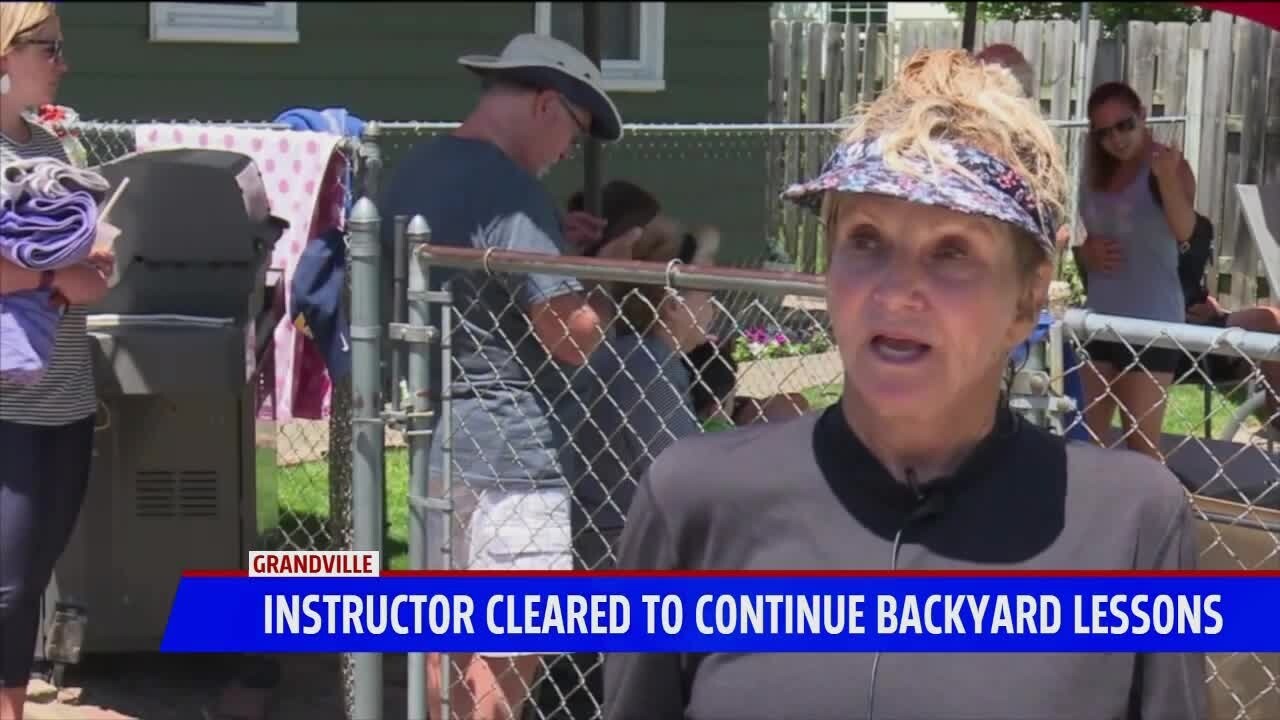 GRANDVILLE, Mich. — A woman who has been teaching swimming lessons for over 30 years from the pool in her backyard has gotten the OK to continue after originally being told by the city that she would have to stop.

Rita Shalhoup, better known as Ms Rita, has been teaching her unique brand of aggressive swimming lessons for several decades, teaching generations of West Michigan children from her home.

“For parents who do have little ones, who are active around lakes or pools or grandparents have pools, it really is a scary thing to think in 10 seconds you can lose a child,” Shalhoup told FOX 17 Wednesday.

She started teaching kids how to be safe in and around water after she and several other families in the neighborhood had swimming pools installed.

“My son I found him drowning in our pool at 3. He got through the gate, unlatched it.. I was in the house and he fell in,” she told FOX 17.

“I became very aggressive with my teaching knowing that a small child has to be able to get themselves to the side, they have to know how to go underwater because when they fall in their brain shuts down and nothing works.”

But as her program grew in size throughout the years, complaints from neighbors about traffic in the neighborhood began to trickle in to the city of Grandville.

Assistant city manager Matthew Butts spoke to FOX 17 last week about the situation, saying, “We’ve had complaints from a number of residents in the neighborhood that because of all the traffic, they can’t get mail, they can’t get garbage picked up, can’t get deliveries.”

Last week the complaints prompted the city to send Shalhoup a letter saying that she would have to stop the lessons because the business did not comply with city ordinances.

An online petition was started and garnered over 16,000 signatures in just a week.

The swell of support got the attention of Grandville city council member Justin Noordhoek.

“We had received quite a few communications from residents and non-residents for their support of Ms Rita. We also received some communications from neighbors that were expressing concern over the level of nuisance they were experiencing in the neighborhood,” Noordhoek told FOX 17 Wednesday.

On Monday Noordhoek made a motion to have the city’s planning committee alter the city’s ordinance that Ms Rita’s business was in violation of.

“I believe that local government should be the most responsive to residents,” Noordhoek said.

“So the fact that there was such a large public display of support for her and outreach by residents, as well as by the neighbors who had concerns, as city council members we should be and are very available to those concerns.”

The planning committee will now spend the next few months working on making that change and determining ways to alleviate the neighbors’ concerns.

Rita says she is already making certain alterations to her program to help with traffic issues in her neighborhood.

“I am cutting down the length of the class from 45 minutes to a half hour. I am cutting almost in half the amount of kids in each class,” Shalhoup said.

The situation on a road to resolution that Rita feels like both she and her neighbors can be happy with.