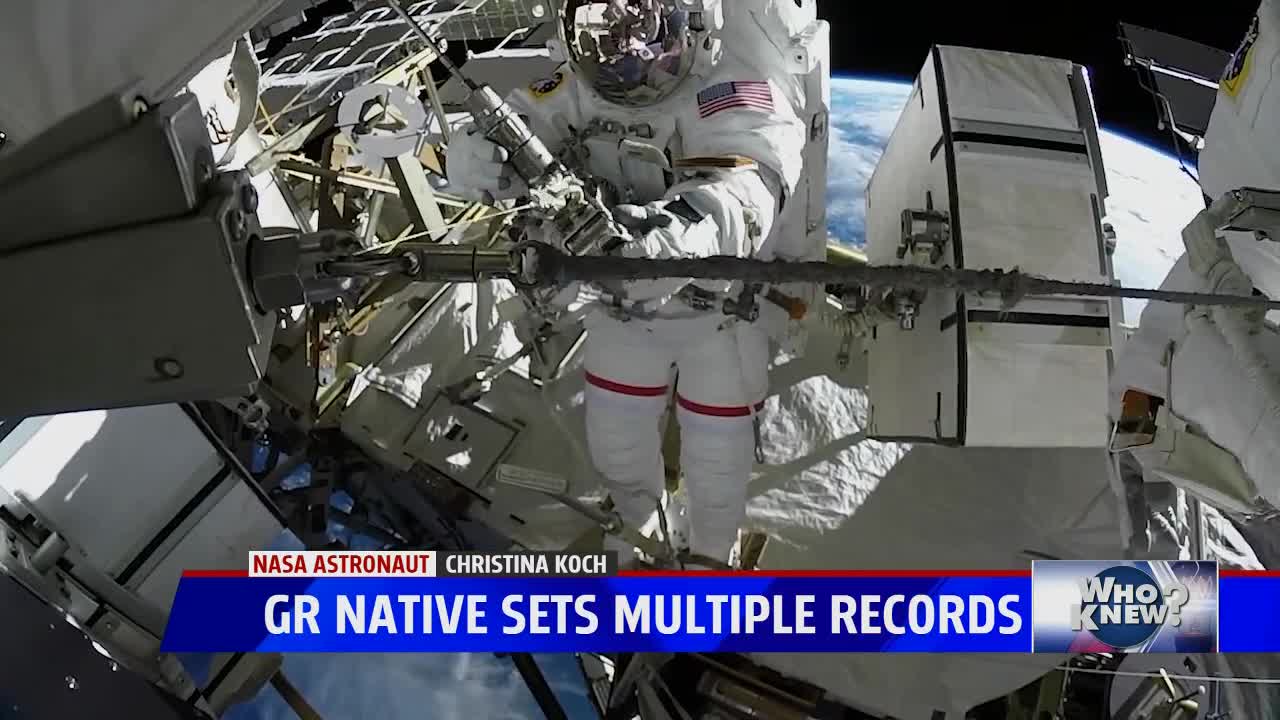 On Wednesday in Houston, she reflected on her trip and answered questions during a press conference in Houston, Texas.

When asked about her upbringing in West Michigan, Koch said spending time here was a big factor in getting her to where she is today.

"I found that the spirit of hard work, and taking care of each other, and caring about each other was given to me from the time I was very young, from the people of West Michigan,” she said. “My family there are farmers that was completely instrumental in me getting to where I am today."

It's almost reminiscent of “Star Trek.” Grand Rapids hometown girl, Koch grew up working the fields in West Michigan with her grandparents, but she had dreams that were quite literally out of this world.

"I was going to live according to my own passions. If later in life I looked back and I reflected upon the fact that the experiences I had gained, the skills I had gained, would allow me to contribute in a great way to the space program that I held in such a high regard. Only then would I ever apply to be an astronaut.” Koch said.

She succeeded in a big way. On Feb. 6, Koch returned to Earth after spending 328 days on the International Space Station, a world record for women.

When asked how it felt to look back at work, Koch says; "I literally exclaimed! I just said, ‘Oh my goodness!’ and of course that’s not the right thing to say in a spacecraft when you could be noticing anything not going well. So, the very next thing out of my mouth to Nick and Alexi was, ‘Everything is OK, it’s just Earth.’”

But it was phenomenal, it was that moment where I realized that this was real, and that I had left our planet.

”While away from our planet Koch carried out roughly 200 investigations for NASA, and orbited the Earth 5,200 times.

“Taking it one day at a time, making sure you recognize that even though there will be times where it feels like time is passing slowly, your time up there is special."

Koch didn’t stop at one world record while "up there."

Back in October Koch, and fellow astronaut, Jessica Meir conducted the first ever all-female spacewalk.

“I don’t keep the stats on that stuff, but luckily other people do," says Koch. "And I think that pointing out those milestones, as much as I might not like to be the center of attention, I think it’s important because it spreads the word on where we’re at, state of the art, in our human space exploration. And I think milestones provide motivation for people, so I think it’s a good thing to recognize.”

She's a world record holder, an inspiration for us all, and a Grand Rapid native... Who Knew?

"It helped me to see that all humans are inherently the same, that we have more that unites us than makes us different," reflects Koch.