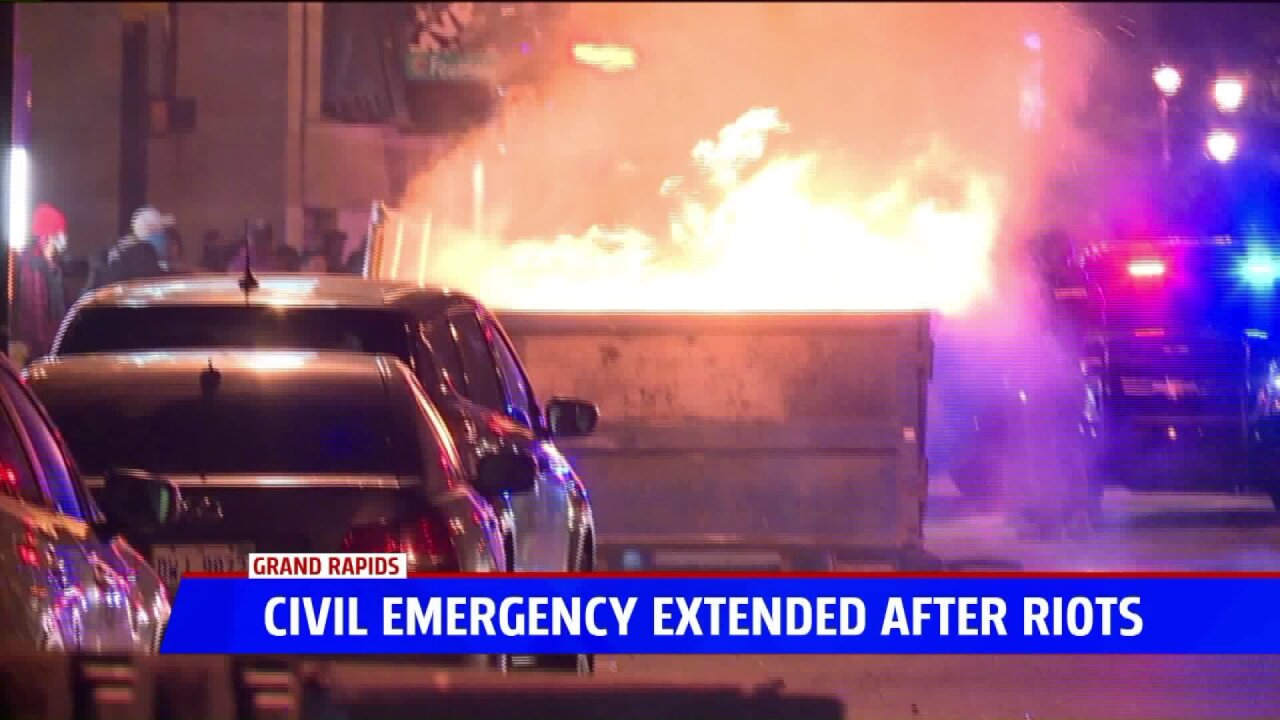 Grand Rapids State of Civil Emergency is being extended after a city commission vote Tuesday night.

The emergency was enacted Sunday by Mayor Rosalynn Bliss following the riots that tore through downtown.

It's important to note the State of Civil Emergency does not include the Grand Rapids curfew or the presence of the National Guard.

The Grand Rapids curfew ended Tuesday morning, and the National Guard is no longer in the city.

All this as protesters plan to take to downtown again on Wednesday.

According to their Facebook event post, protesters plan to gather on Fulton Street starting at the Grand Rapids Police Department at 3:45 p.m. on Wednesday.

Grand Rapids Police Chief Eric Payne plans to be at the protest are participate as well.

City Manager Mark Washington emphasizes that while these protests take place it is important to have the Civil State of Emergency active, because it allows the city to be flexible about it's response to potential emergency situations.

The city can seek state resources to help with emergency response and financial reimbursement from the state. "This is very, very important, and as we are we are in a dual emergency both in public health and public safety, and many of our people are duly responding to both emergencies," says Washington. "We are very resource restrained, particularly in our police department officers, who are working double shifts after working a special seven-day workweek. We need as much support as we can get to be able to rapidly apply to these changing dynamics. I shared with the commission this morning that there were over 40 cities that have curfews in place. The curfew and other resources that they're utilizing to respond to these public safety crises and riots are ones that we need the ability to utilize if needed to quickly enact tools that will help us to manage this."

Washington went on to say that they the city is currently working with 300 officers responding to 3,000 to 4,500 protesters.

The State of Civil Emergency is now set to expire at midnight on June 16.

Regarding the rioters, the city is actively charging individuals who instigated violence Saturday evening, and Sunday morning in Grand Rapids.

Several suspects were in court on Tuesday, including 22-year-old Alexandria Lyons. She is facing one count of inciting a riot and another count of malicious destruction of property, which are both felonies.

GRPD has received more than 20,000 tips about who participated in violence on Sunday. They plan to follow up on each one.