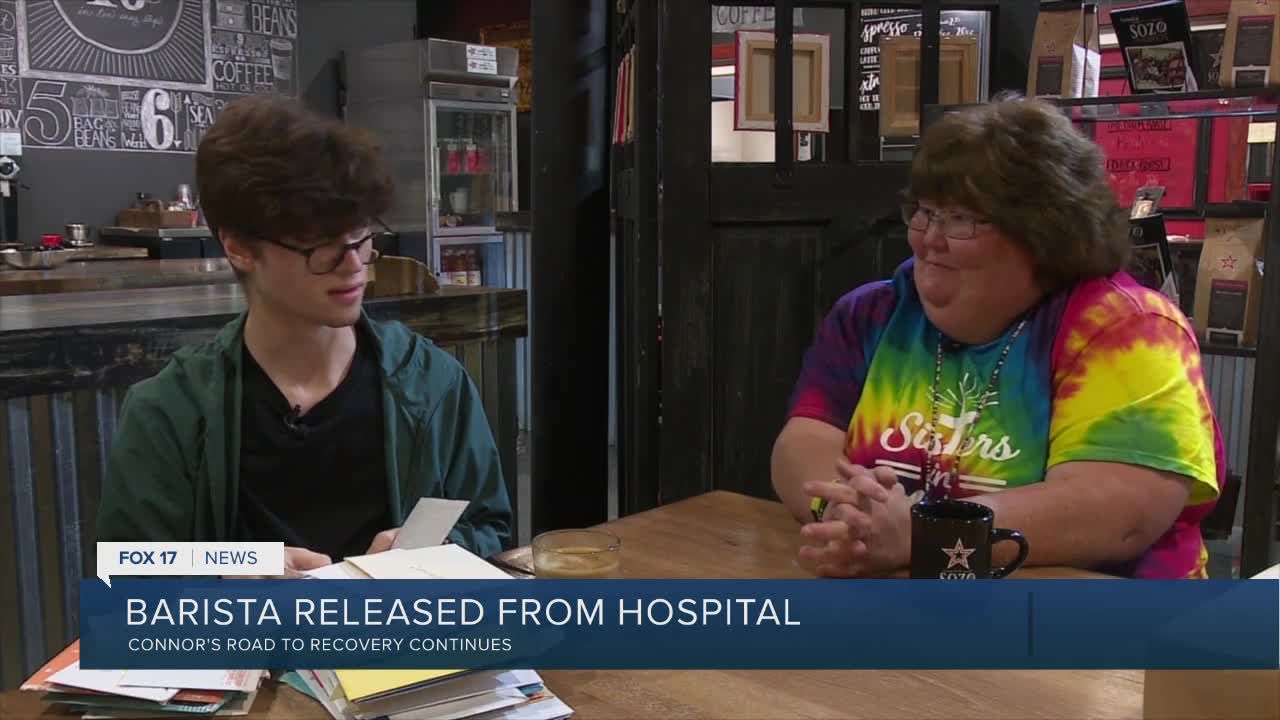 IONIA, Mich. — The man sitting with us, sipping a warm cortado at Sozo’s Coffee Roasting in Ionia, is Connor Hearld.

Connor tells us; “You take a lot of things for granted. Then when you get in an accident, and like you realize, wow. I almost just died. That's definitely something that kind of like weighs on you.”

Connor is a barista at Sozo’s and almost died in August of 2020 from a car hitting his.

It’s a miracle we are able to sit and have coffee with Connor.

“I’m actually just glad I can walk,” he notes.

It’s a miracle that the woman also sitting with us, Connor’s past customer, Polly Misner has prayed for.

Misner turns to Connor and says, “I'm in awe at your healing process. What did you have? 11 broken bones? Something like that?”

Connor reply is quite lengthy, so I’ll list it for you…

Connor says he has…
-11 fractures, not including his tailbone
-Nearly 1 fatal organ
-Two lacerations to his kidneys
-1 laceration to his liver
-A concussion
-Bruising in his lungs
… and some more injuries that Connor would have to look up the terms to list.

Amid all of this Polly was not alone in praying for Connor’s healing.

In September FOX17 ran Polly’s story of calling on others to pray for Connor, and also to write cards.

The call is referred to as “Cards for Connor.”

It’s been one month since Polly put the request out, and people did send in cards.

In fact as we sit with Connor at Sozo’s Coffee more cards are given to him by a past co-worker.

So I ask Connor to show us the cards he brought with him in a paper bag.

Connor complies and with a large thud, a massive pile of cards hits the table we are sitting at.

Connor tells us all of the cards have poured in to Sozo’s Coffee from West Michigan businesses, senior living homes, prisons, friends, family, and perfect strangers.

Some of the cards have personal artwork on the front, some of them recount a stranger’s near death story, almost every card offers prayers and well wishes.

I ask Polly, “You started all of this by asking people to send cards. How does seeing this make you feel?”

Polly laughs and says, “Don’t make me cry!”
She continues to Connor; “God put on my heart to do this for you because I just knew that you needed to be spoken into, because you’re an amazing young man. I don't know you, but when I come in here (Sozo’s Coffee), you make me feel comfortable, and you're kind. People need that in their lives.”

Kindness, that’s what all of this comes back to.

“I actually have, ‘Be kind and loving’ tattooed on my hands,” says Connor.

He adds; “It's definitely like my mantra, because I don't really know what anyone else is going through. So be nice, and you know, this little cup of coffee might actually make their day.”

Kindness is what Connor showed to Polly to make an impact on her mornings.

Kindness is what made Polly starts Cards for Connor after Connor’s accident.

Kindness is what made perfect strangers write these cards of hope for Connor’s recovery.

So, I had to ask…. Did these cards help Connor in his recovery?

Connor’s reply is quick and definite, “I think it's helped tremendously!”
He continues; “Reading people's words, like the people I don't even know, just like to know people care! You can assume people care, but then to actually have that visible evidence, like held in your hands, knowing that people do is a way different feeling.”

Connor’s kindness has created a ripple effect throughout West Michigan.

The local barista is working on getting healthy and being able to move well again.

Connor hopes to be brewing coffee at Sozo’s again soon.

In the meantime he’ll be reading your cards, and spreading kindness anyway he can.

As we finish our coffees and go to stand up Polly says to Connor, “Thank you for making me feel like I mattered. You make people feel like they matter, and that's a good thing.”