Figuring out mistakes in filing for unemployment 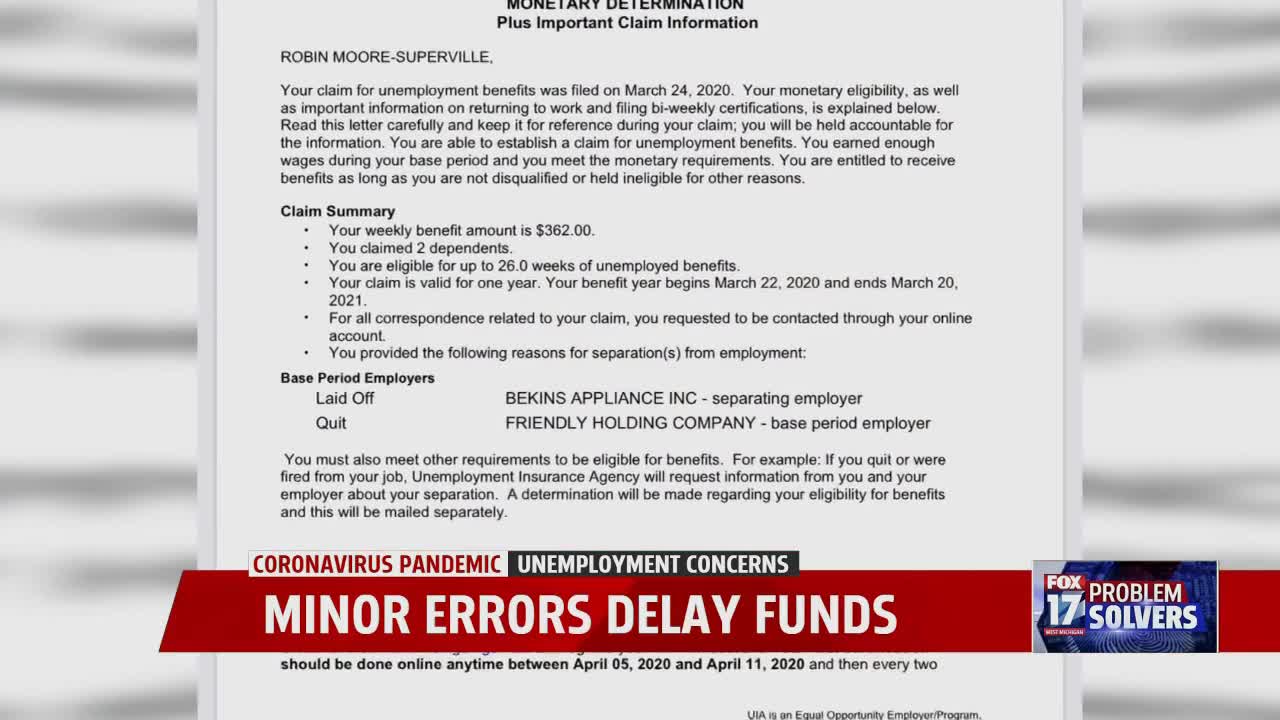 MUSKEGON, Mich. — We are hearing countless stories about frustrations with Michiganders applying for and receiving their unemployment benefits during this Coronavirus pandemic. And with the system so flooded, it's difficult to get someone on the phone right now.

That's the case for Robin Moore, who filed on March 23rd and received her first week's pay, $362 dollars before taxes, but she quickly learned there was a problem with her second week's claim.

"It was put on hold and as for a reason why, it says, 'pending adjudication'. Then it asked if I was unable to work due to illness, injury or restriction. I said 'no'. It asked if I quit any job or refused any job offer. Again I said, 'no'", Moore told Fox 17 on Tuesday.

Robin cross-checked her paperwork and it was identical from week one to week two, so she figured it was an error by the unemployment office since she had been paid for the first week.

So we reached out to a local HR Expert, Deb Fragel, who confirmed our hunch, Robin had clicked on the wrong drop down tab stating her reason for being out of work.

She chose the generic "Laid-Off" tab, when she should have chosen "Plant Shut down due to Covid-19", explained Fragel.

When you are out of work due to your employer being shut down due to Coronavirus, filers get a waiver and are not required to actively seek employment, as Moore was being asked to do. But since she was listed under the generic "Laid-Off" tab, the Unemployment Agency can ask a beneficiary at any time about them seeking employment. Fortunately in Robin's case, they didn't in the first week or she would not have even received that money either.

The good news is, Robin now knows that she doesn't need to answer all those questions about seeking employment or wonder about the error. But the bad news is, she sill needs to speak with someone at the Unemployment Agency to get her mistake fixed.

Fragel told us most importantly for people in Robin's situation, that you continue to certify with Marvin every two weeks, even if your account is frozen, because once the error is resolved, you will easily get all of that retro-pay or back-pay.

According to Jeff Donofrio with the Labor and Economic Opportunity Department, the phone lines should be getting better soon.

"We've added hundreds of staff to the phone lines, we've also got about 500 people in the pipeline of partners, other staff that we're bringing on to make sure we can serve as many people as possible. We've seen large increases in the volume of people who have been helped on a daily basis and we've expanded hours of the phone system and the days so we've actually gone into the weekend now," said Donofrio. He also said that they recently added server capacity to the website and Monday night saw higher traffic than any time in the past few weeks.