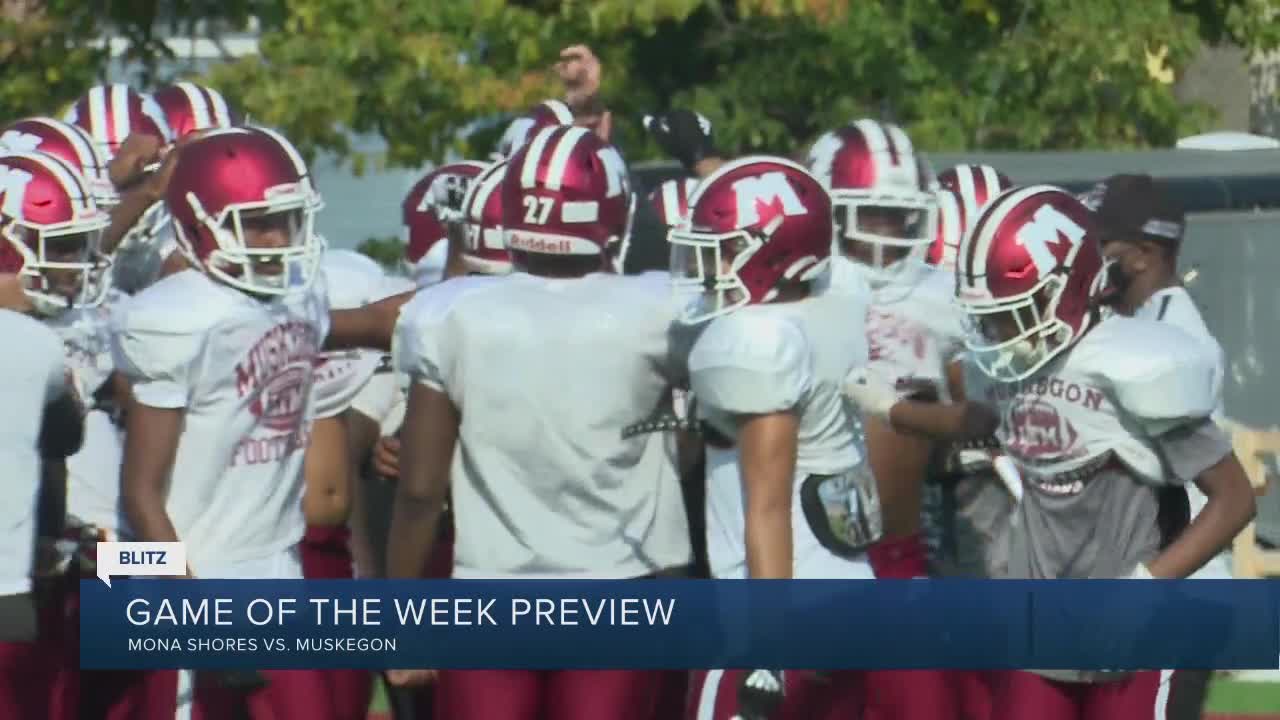 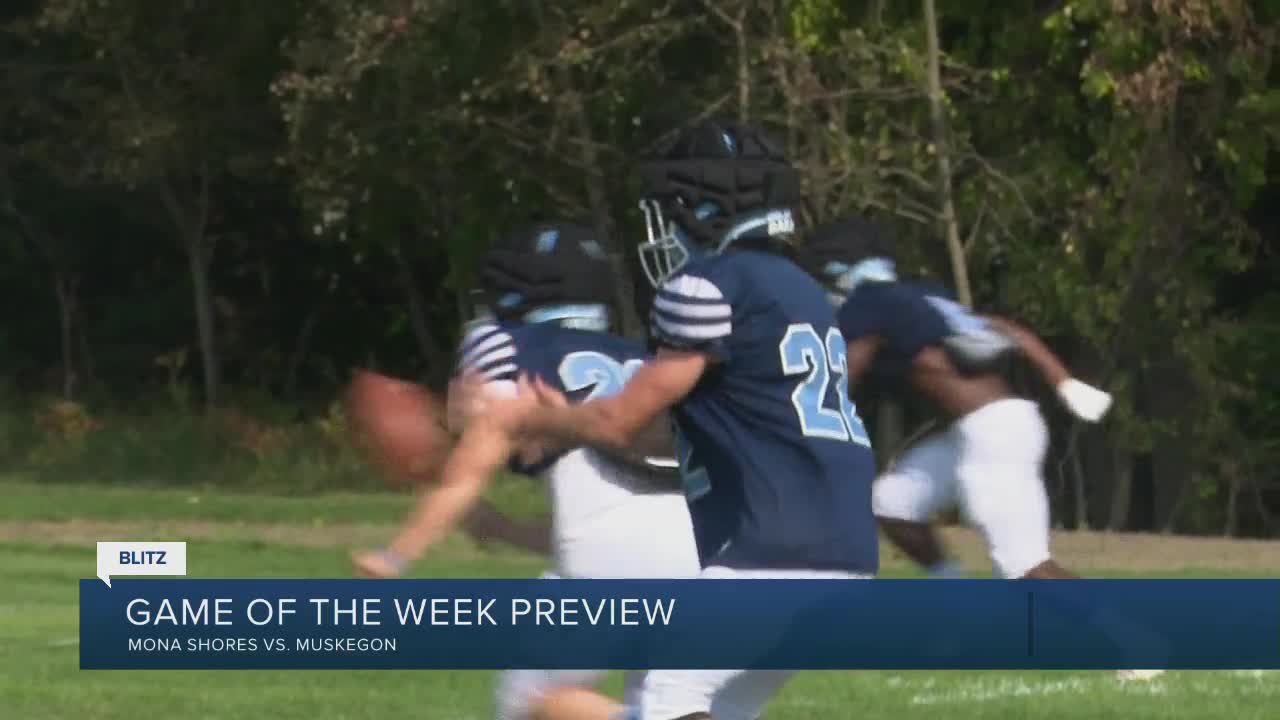 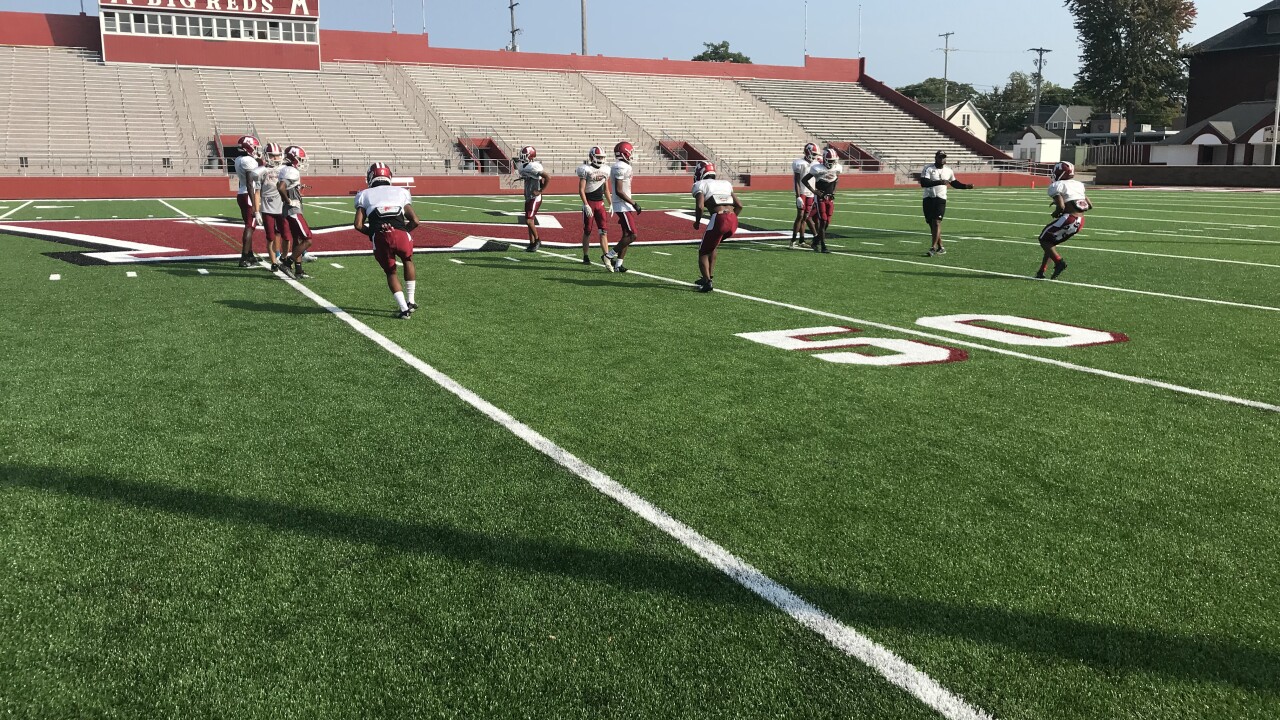 And you can hear more about week two from our Jason "The Book" Hutton, along with Bret Bakita, in their podcast:

"This is the first time in 28 years coaching football that I haven't looked at the weather, nor do I care," said Muskegon head coach, Shane Fairfield.

"Before, I knew our practice field would be wet and on Friday night our game would be on grass and we're going to slip and slide, I don't care anymore, we have turf."

The Big Reds are coming off of a 59-14 win over Holland to begin the season while the Sailors shutout rival Reeths-Puffer, 55-0 on the road.

"We've been battling the same guys since middle school," said Mona Shores offensive tackle, Mason Klos, "so when we go into Muskegon week, it's more of a serious, lockdown week."

Muskegon has won the previous five meetings with a 53-0 win over the Sailors last fall.

Staying in Muskegon county, it's another big matchup in the West Michigan Conference as Montague and Oakridge square off.

Four of the previous five meetings between the two have been decided by seven points or less, with Oakridge winning, 15-13 in 2019.

Allendale and Hamilton meet for the first time as conference foes as both programs enter the newly aligned OK Blue.

The Hawkeyes dropped the last meeting to the Falcons, which came back in 2015 in a non-conference showdown.

"I'm excited to play Allendale again, it's exciting to be back in the OK Blue," said Hamilton second-year head coach, Phil Koops, "I think they're a good team."

He's hoping his team is now ready to take the next step.

Rockford and Caledonia square off once again as OK Red foes.

The Rams have won the previous five meetings but the Scots hung tough last fall, 10-7 in a thriller.

Brent Cummings led the Rams to a 16-13 overtime victory over Jenison in week one as he looks to start 2-0 in his tenure as head coach.

Also in the OK Red, Grandville travels to East Kentwood as the Bulldogs look to get off to a 2-0 in back-to-back seasons.

Eric Steigel's Bulldogs had no problem scoring in week one, as they beat Grand Haven, 62-18 behind a four touchdown effort from senior runningback Marcel Love.

East Kentwood, meanwhile, lost a tough one, 21-13 to Hudsonville in week one.

Marc Cisco's Byron Center team is once again flexing its muscles in 2020.

After the Bulldogs' first 9-0 regular season in school history, they're off to another impressive start this fall after beating Forest Hills Northern, 38-7.

Grand Rapids Christian led Forest Hills Central 13-0 in week one before falling, 21-13 as Rueben Riley and Kirk Sundberg look to notch win No. 1 as co-head coaches for the Eagles.

The Trojans dropped game one, 34-7 to Cedar Springs as the tough schedule continues in the new OK Gold.

Also in the OK Gold, South Christian is off to a good start in Danny Brown's second season at the helm.

The Sailors beat Kenowa Hills, 25-15 as they turn their focus to Forest Hills Eastern.

The Hawks beat Ottawa Hills, 38-12 to start the season unbeaten.

South Christian has won the last four meetings in the series, including a 14-11 game in week nine last fall.

In the OK Silver, NorthPointe Christian is back in the conference after spending 2019 as an independent going 6-4 on the season.

NorthPointe Christian defeated Kelloggsville, 37-14 in week one of the regular season as they take on Belding in week two.

The Mustangs have dropped the three previous meetings with the Black Knights, a team that finished 4-5 last fall and started the new season with an 18-15 win against Comstock Park.

Also in the OK Silver, Hopkins and Sparta meet for the first time as conference foes, both coming in at 1-0 on the new season.

The Vikings and Spartans have met only twice in program history, back in 2010 and 2011 with the two teams splitting those games.

Hopkins is coming off of a 43-0 shutout against non-conference opponent Orchard View while Sparta shutout Godwin Heights, 6-0 in week one.

In the OK White, Northview and Lowell are each off to 1-0 starts as the Wildcats beat Greenville, 30-12 and the Red Arrows were impressive over East Grand Rapids, 20-6.

Lowell has won three of the last four meetings, since Northview rejoined the OK White in 2016.

It's a rematch of a 2018 district semifinal as Unity Christian travels to West Catholic.

The Crusaders beat the Falcons, 41-22 to advance to the district final two seasons ago and that memory has not faded.

"They've got a great program out there, they were the ones, it's not lost on us, who beat us two seasons ago in the playoffs at Jenison high school, and they did it handily," said West Catholic head coach, Justin Michalowski, "my hats off to them, but I feel we'll be ready."

The Falcons matched their win total from the 2019 season with the 36-13 win over Coopersville to begin the fall.

Portage Central is ready to open the season after a positive test of COVID-19 canceled game one against East Lansing.

Both teams made the playoffs last fall with the Spartans matching their program record in wins, going 10-1 while the Mustangs finished the season at 5-5.

Also in the SMAC, Portage Northern and Mattawan each hope to begin the season 2-0.

David Arrasmith notched win No. 1 as Wildcats head coach with a 20-0 shutout over Gull Lake in week one.

Meanwhile, Portage Northern came away with an impressive 15-12 victory over Lakeshore.

In the Central States, Kent City and Hesperia square off, each coming off of solid starts to the new season.

Hesperia is hoping to start the season 2-0 for the first time since 2015, which is the last time the Panthers beat Kent City with the Eagles taking the last four meetings.