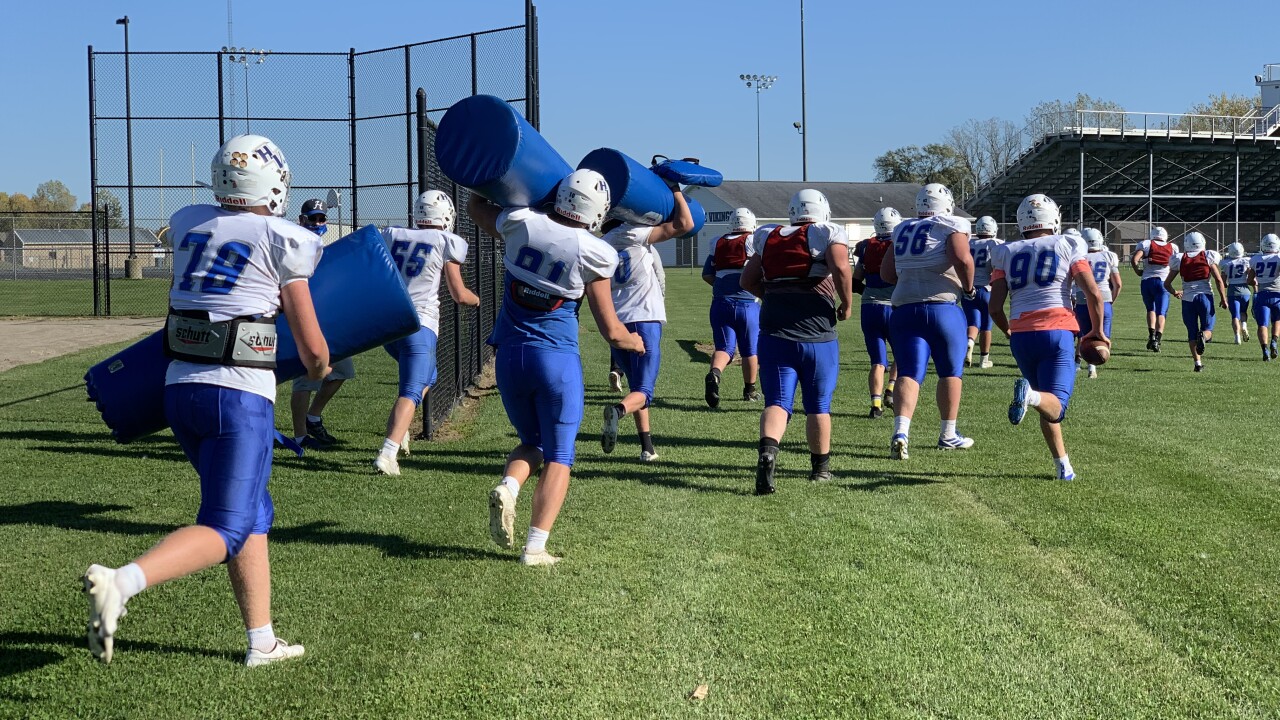 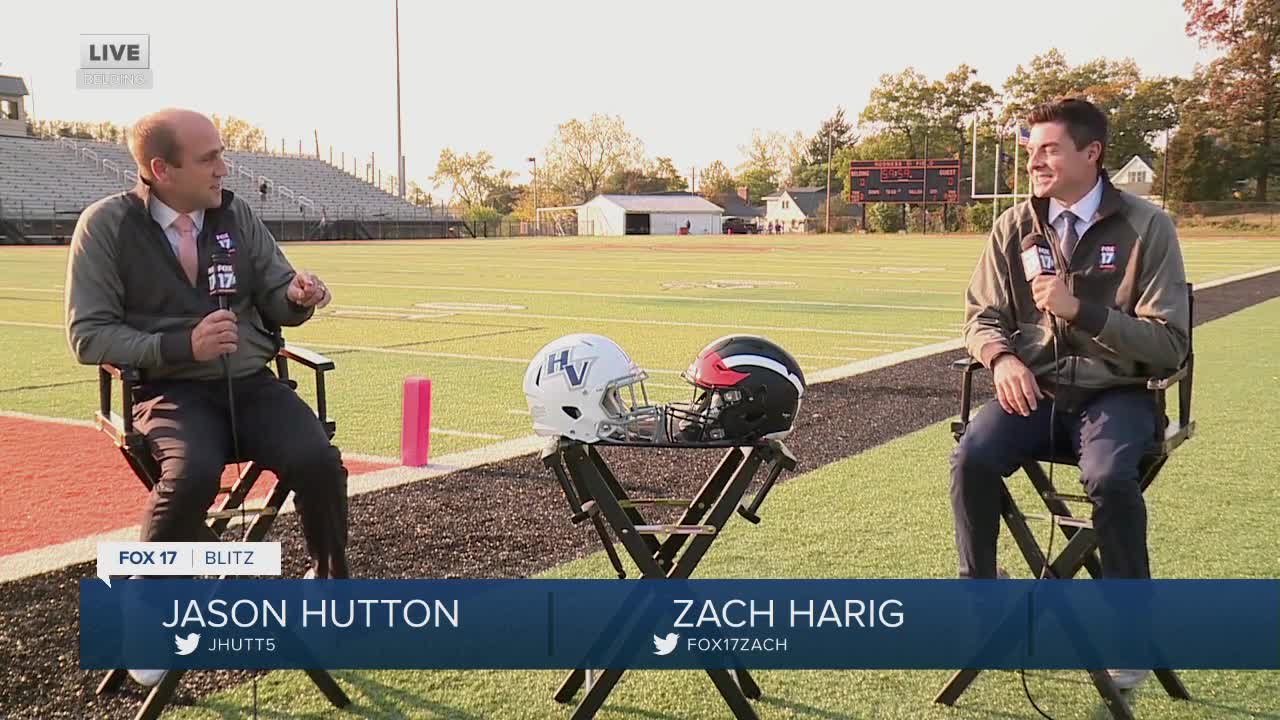 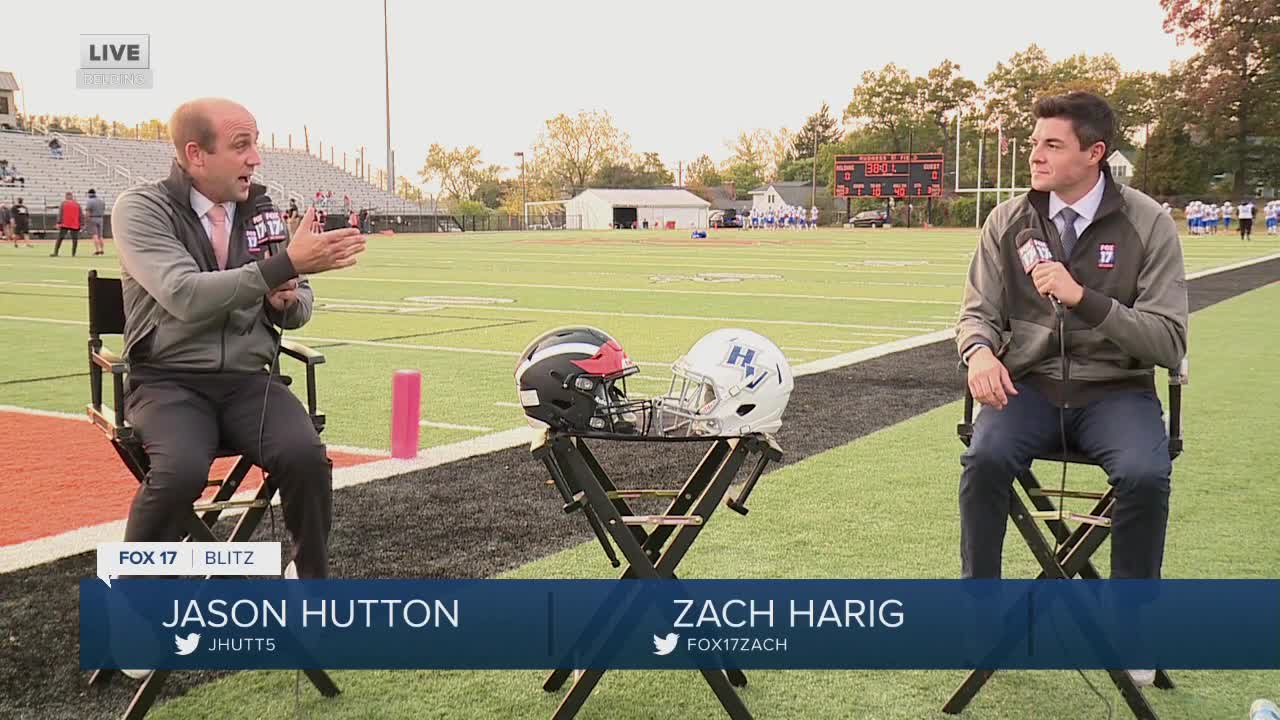 The Blitz Game of the Week brings us back to the OK Silver where Hopkins looks to make it 17 consecutive conference victories when the Vikings travel to Rudness Field.

With a win, the Black Knights can clinch at least a share of the OK Silver championship with just one remaining conference game on the schedule.

The Vikings beat Belding twice in the abnormal OK Silver regular season in 2019.

"I know Belding is going to have an ax to grind, they're going to want revenge on last year's wins," said Hopkins head coach, Cody Francis.

Due to a shortage of officials, the Centreville at Mendon football game will be played on Thursday evening at 7 PM.

In the OK Gold, Cedar Springs is coming off of a tough 42-28 setback against defending state champion, Grand Rapids Catholic Central in week three.

The Sailors are getting set for a major challenge after knocking off Kenowa Hills, Forest Hills Eastern and Ottawa Hills in the first three weeks.

The two unbeatens in the OK White square off on Friday night when Lowell hosts Byron Center.

The Bulldogs have been as impressive anyone in West Michigan, with dominant wins over Forest Hills Northern and Grand Rapids Christian in weeks one and two before leading Forest Hills Central, 21-0 after a quarter and winning, 35-14.

Meanwhile, the Red Arrows are also 3-0 after an impressive win over East Grand Rapids in week one and then beating Northview and Greenville to follow.

It will be the first meeting between the two programs since a 2015 district final, won by Lowell, 48-17.

Also in the OK White, East Grand Rapids and Forest Hills Central look to stay alive for a share of the conference crown on Friday night.

The Rangers lone loss came to Byron Center in week three while the Pioneers fell to Lowell in week one.

In the OK Green, Muskegon travels to Zeeland East in a showdown of one loss teams.

The Big Reds are 8-1 in the all-time series with Zeeland East.

In the OK Blue, Spring Lake will look to beat Allendale for the first time ever with the Falcons being 4-0 in the series, all games coming since 2016.

The Falcons are one of two unbeatens left in the conference as Unity Christian also sits at 3-0.

Meanwhile, the Lakers are coming off of a 14-12 loss in week three to West Catholic.

In the OK Red, both Hudsonville and Caledonia look to avenge conference losses in week three.

The Eagles came back to lead Grandville, 17-14 in the final minute before falling, 21-17 while the Fighting Scots lost at Jenison, 28-14.

Hudsonville has won the last four meetings in the series going back to 2016.

Also in the OK Red, Jenison looks to win a third straight conference game as they travel to East Kentwood.

The Falcons are coming off of a 42-12 win over Grand Haven in week three.

The teams last met as non-conference foes in 2014 and 2015, splitting those matchups.

It's the Battle for Portage in the SMAC on Friday night as Northern hosts Central.

The Huskies are off to another impressive start this fall, notching wins against Lakeshore, Mattawan and Gull Lake, it also marks the second consecutive season Northern has started the season 3-0.

For the Mustangs, they're coming off of a week one forfeit due to COVID-19 and have since dropped games to Lakeview and St. Joseph.

It will mark the 63rd meeting in the series with Central leading, 39-23.

Lakeview remains one of three unbeatens in the Southwestern Michigan Athletic Conference as they travel to Mattawan on Friday night.

The Spartans and Wildcats have split the last four meetings in the series with Lakeview winning in 2019, 28-12.

In the Interstate-8, Coldwater looks to keep rolling after impressive wins over Northwest, Marshall and Loy Norrix.

A win would give the Cardinals their first 4-0 start to a season since 2015.

Harper Creek is off to a 1-2 start to the season with losses to Pennfield and Jackson Lumen Christi.

Coldwater has won the last two meetings in the series.

The FOX 17 Blitz will have a recap of all of these games beginning at 10:45 PM on Friday night.