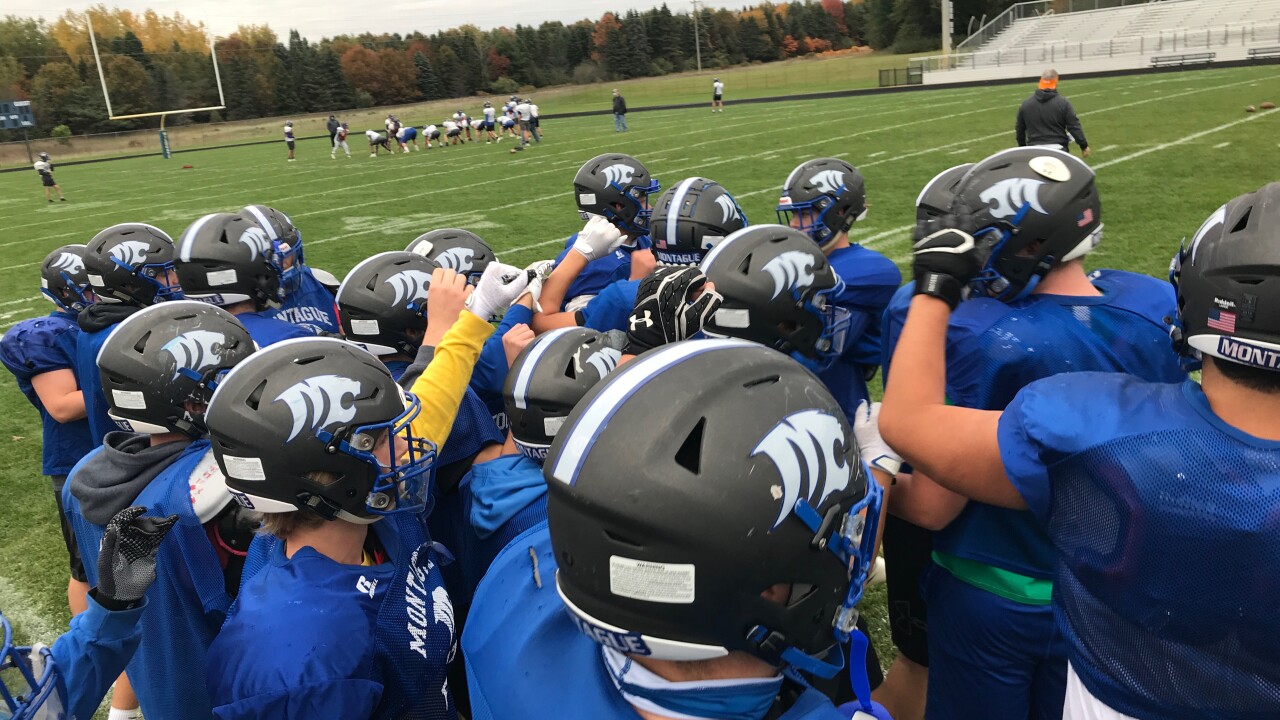 The Game of the Week takes us to the West Michigan Conference this Friday night as Montague hosts Whitehall.

The Wildcats have won the last five meetings in the series with the Vikings last win coming back in 2014.

Whitehall has allowed just three points this season which came in a 41-3 thumping of North Muskegon in week three.

Meanwhile, Montague has outscored opponents 208-12 so far this season as the two get set to square off in what will likely decide the conference championship.

A good ole fashion border war will lead the show on Friday! pic.twitter.com/p1Hel5noaW

The Blitz Battle brings us back to the OK Green where Muskegon hosts Zeeland West.

The two programs haven't played since a district final in 2017, which Muskegon won, 55-20.

In fact, this will be the first conference meeting between the Big Reds and Dux since 2006.

The Dux come in unbeaten but still have the Big Reds and a week six meeting with Mona Shores looming.

The unbeaten Dux get their toughest test to date Friday against the Big Reds! pic.twitter.com/jQI0FUWXx3

In the Southwestern Athletic Conference, Schoolcraft is set to host Lawton.

The Eagles come in with one loss this season, though it was to Division 3 state powerhouse, Chelsea on the road after the Galesburg-Augusta program was shut down due to COVID-19.

The two programs met last season in the district final with Schoolcraft winning, 47-10.

Friday night will mark the first regular season meeting since 2016 between the Blue Devils and Eagles.

Also in the SAC, Kalamazoo United puts its unbeaten record on the line at home this Friday night against Constantine.

United has won its four games by an average of nearly 30 points while Constantine enters on a three game winning streak after the week one loss to Schoolcraft.

United has won three of the last four meetings in the series but the Falcons are 10-3 in the 13 all-time meetings.

In the Interstate Eight, Hastings will look to clinch its first conference championship since 2001 with a win at home against Coldwater.

The Cardinals were handed loss No. 1 in week four from Harper Creek, 28-7.

Coldwater has won the last six meetings in the series by a combined score of 196-47, with Hastings' last win over the Cardinals coming back in 1994.

Unity Christian is the lone unbeaten left in the OK Blue as the Crusaders can win the first conference championship in program history with a win.

Baldwin Street Middle School will play host to the Crusaders and Hamilton this Friday night, as the Hawkeyes look for their first win over Unity Christian since 2009.

The Crusaders have won the last ten meetings between the two programs as they look to remain unbeaten going into a conference showdown with Allendale in week six.

Staying in the OK Blue, Allendale and West Catholic look to stay alive for at least a share of a conference championship with a win on Friday night.

Allendale was handed its first loss of the season in week four, 38-36 to Spring Lake while West Catholic dropped a week two meeting with Unity Christian, 39-21.

The teams have split the last four meetings in the series.

In the OK Red, Grandville is set to host Caledonia with the Bulldogs off to a second consecutive 4-0 start.

Grandville comes in averaging 49.3 points per game through four games while the Fighting Scots come off of three consecutive losses to Rockford, Jenison and Hudsonville, respectively.

In the Lakes 8, Muskegon Catholic Central travels to take on Orchard View.

The Crusaders have allowed just 18 points in four wins this season and will look for their first win over the Cardinals since 2017.

Ravenna will host Oakridge in the West Michigan Conference as the Eagles hope to stay alive for a share of the conference title.

In fact, Oakridge will take on Whitehall in week six and the Vikings have a showdown with fellow unbeaten Montague this week as well.

The Eagles have allowed just 42 points this season and all of those came in the loss to Montague in week two.

Oakridge has won the last eight meetings in the series with Ravenna, dating back to 2011.

South Haven ended a 29-game losing streak earlier this season with a 34-20 win against Niles.

Now, the Rams travel to Comstock with both teams coming in at 2-2 in the BCS, with South Haven joining the conference for the first time after years in the Wolverine.

The Rams are coming off of a 28-18 win against Berrien Springs last week while the Colts were knocked off by Buchanan, 42-7.