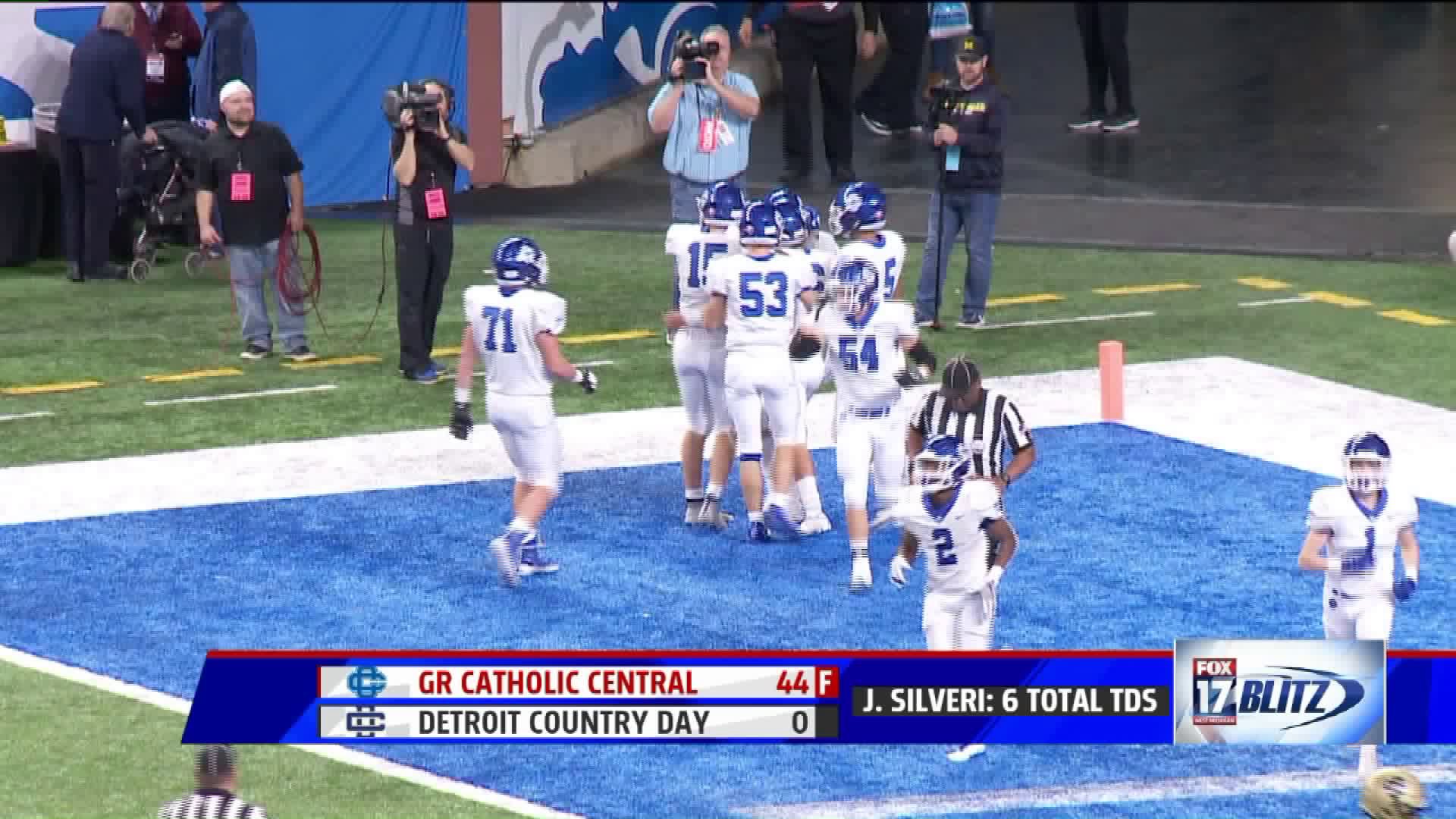 DETROIT -- The Grand Rapids Catholic Central football program is bringing home the Division 4 state championship trophy. The Cougars had to go against a tough Detroit Country Day defense that had entered the game with four shutouts on the season, with 12 points (twice) being the most points allowed in a game all season.

After forcing an early punt on the first drive of the game, Catholic Central would get off to a quick start offensively. Facing third-and-five on the Cougars' opening drive, sophomore quarterback Joey Silveri kept it himself for a gain of 17 yards and a first down. Just three plays later, Catholic Central faced another third down as Silveri found Malachi Love for a 19 yard gain.

With just over four minutes left in the quarter, Silveri threw a jump ball to junior wide receiver Jace Williams who put his athletic ability on display, snatching the 15-yard touchdown. The Cougars would lead it 6-0 after a missed extra point.

On the ensuing Yellow Jacket drive, Dan Southerington would intercept an Ahlon Mitchell pass and return it 30 yards to set the Cougars up with great field position at Country Day's 14-yard line.

On the first play of the drive, Silveri would go back to the endzone and back to Williams, this time for a 14-yard score to make it 12-0 Cougars less than nine minutes in after an unsuccessful extra point.

After another Country Day punt, it would take the Cougars just two plays to find the endzone again, this time on a 53-yard touchdown run by Silveri, who would make it 18-0 at the end of the first quarter after the two-point try was no good.

In the second quarter, the Yellow Jackets would get the ball into Catholic Central territory but would turn the ball over on downs at the 30-yard line. The Cougars would go three-and-out on the ensuing drive.

Minutes later, after forcing another punt, Catholic would start the next drive at its own 16-yard line. On the second play of the drive, Silveri would find Malachi Love who would take it 48 yards inside to the Country Day 36. With 1:23 left in the half, Silveri would lob a pass to senior Drew Gommeson who would make the catch and score from 23 yards out to make it 24-0 after a missed extra point.

In the second half, the Grand Rapids Catholic Central defense would hold the Yellow Jackets to zero total yards and added a pick six from Jake Passinault. Meanwhile, the Cougar offense continued the rout as Silveri added two more touchdowns, one on the ground and one through the air to Williams as he ties the MHSAA record for touchdown receptions in a state final.

Joey Silveri finishes the game with 375 total yards and six touchdowns, four passing and two on the ground as the Cougars roll, 44-0 the final.

"We have teammates and coaches that put you in the best situation," Silveri said after the game, "they help you out no matter what, so you can be confident. You know everyone is going to do their jobs."

Williams finished the game with four catches for 62 yards and the three touchdown receptions.

"Our linemen really blocked well up front," Williams said, "we were able to run the ball and throw the ball today, too."