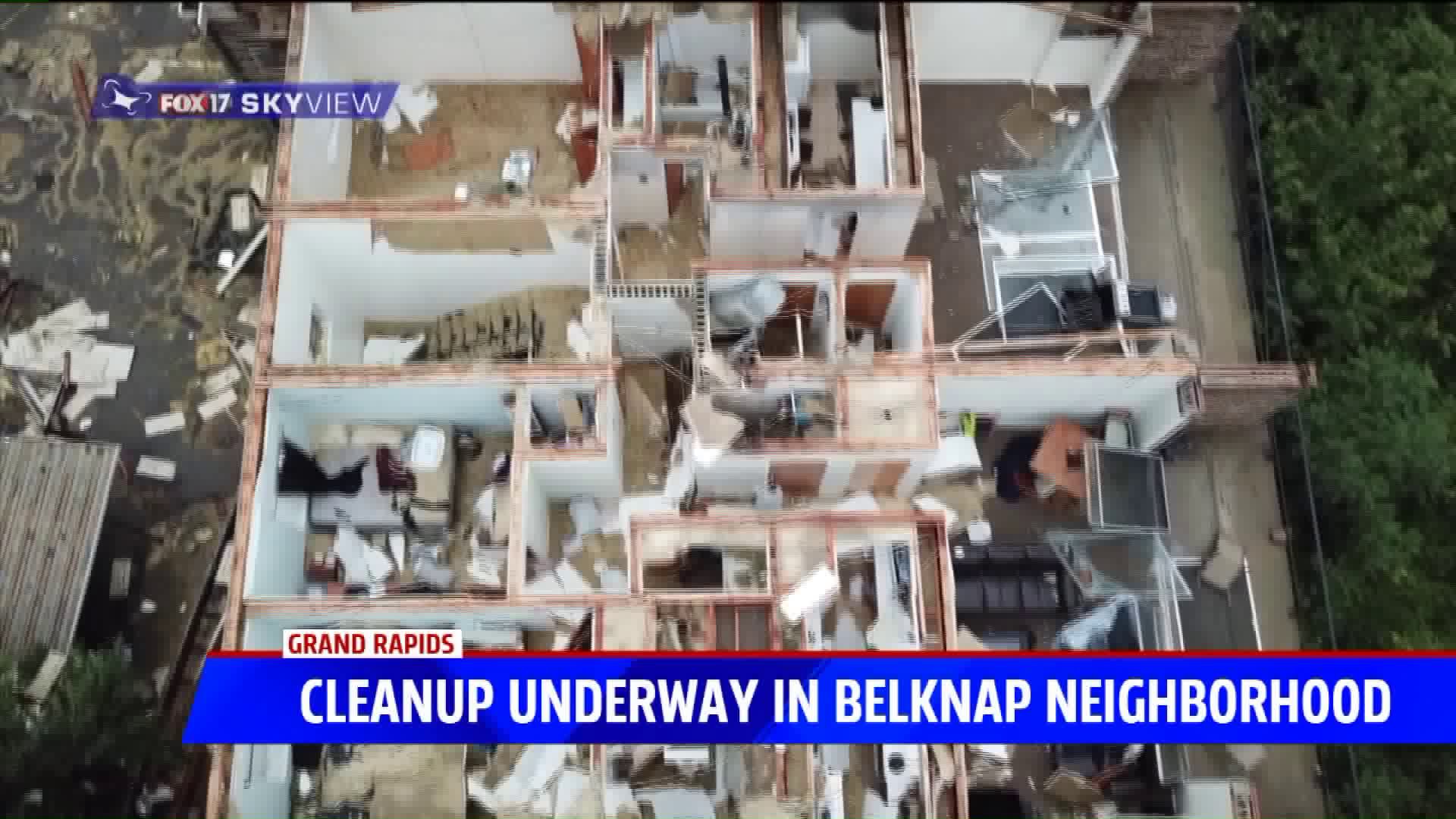 GRAND RAPIDS, Mich. — Cleanup has started following a severe storm that rolled through the city Wednesday night and devastated an apartment building in the Belknap Lookout area.

A multi-story apartment building at the corner of Hastings Street NE and Fairview Avenue NE had its roof almost entirely ripped off.

FOX 17 spoke to one of the apartment's owners Friday morning, who said nobody was on the top story of the building when the storm ripped off the roof. They were there Friday working on cleanup efforts, and said they are just happy nobody was injured.

Several streets in the vicinity of the apartment complex also experienced heavy damage because of the high winds. Debris and tree branches lined the area for several blocks.

A spokeswoman with the City of Grand Rapids said crews were out Friday afternoon working to clear the trees from the area. They will be working through the weekend to get everything cleaned up.

Consumers Energy expects everyone in the area to have power back by Friday evening or early Saturday at the latest. Up-to-date information is always available on their outage map.

Jarrod Schaffer had his car boxed in by a tree and some debris from the apartment building. He is having to Uber to work and make all kinds of accommodations while he finds a solution for his vehicle.

“A small PTSD as far as sounds, because for the first time ever being by the highway at night is kind of giving me a little of a spook because last night it sounded a lot like the sounds we had to deal with on the day of of the storm," he said.

Right next door to Shaffer lives Rick Seccombe. A large tree fell near his home too, but his vehicles were spared. He was reading a book on his deck when the storm started rolling in.

“I grabbed my chair, put it in the hallway there, came back and went like this to close the door and it started going 'whoosh' and I couldn’t close it," Seccombe said.

One street over, Rick Vandermolen lives on Livingston Avenue, which has been under construction for several months. Vandermolen was already living without water service because of the ongoing construction. Now he must wait for his power to get turned back on.

“I came out and the sound was louder than a freight train," he said.

Vandermolen's dog Buddy, a white Maltese Terrier, escaped his yard as the storm approached. If you have seen Buddy, you are asked to send us a message and we can contact Vandermolen.

"It's a nightmare. Its a veritable nightmare.  I don’t know what else could go wrong short of being injuries," he said.