SAINT-JEAN-DE-LUZ, France (CNN) — President Donald Trump says all is well at the Group of 7 summit, which got underway Sunday on France’s Atlantic coast. But there was evidence of rancor behind the scenes.

Trade disputes spilled into the open, even with a new friend. After Trump appeared to soften his stance on China tariffs, aides swooped in to explain that he wasn’t backing down.

Behind the scenes, American officials griped the yearly gathering is being orchestrated to isolate the United States. But aides to other leaders shrugged off the accusation, saying Trump’s go-it-alone view on climate change and trade were his own doing.

Already, the near-consensus among Trump’s foreign counterparts that tariffs on China are causing the global economy to slump appeared to weigh on the President. He told reporters he’s had his own misgivings.

“I have second thoughts about everything,” he said, without saying what he might be reconsidering.

“President Trump responded in the affirmative — because he regrets not raising the tariffs higher,” she said. 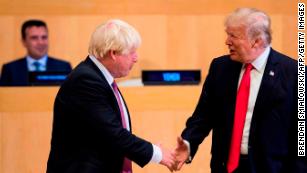 But that wasn’t Trump’s only turnabout. He also softened his threat to force US companies out of China— despite insisting a day earlier he was able to do it using his executive powers.

“I have no plan right now. Actually, we’re getting along very well with China right now. We’re talking,” Trump said.

It was a fraught beginning to the G7, summits that ordinarily proceed with friendly displays of partnership and without the obvious level of discord playing out at the elegant seaside resort Biarritz.

Even an impromptu lunch Saturday between Trump and his host, Emmanuel Macron, appeared to be an attempt by the French President to corner Trump into a discussion of climate change and trade.

Trump insisted the meal was their best meeting ever. But afterward, American officials complained the session materialized without warning and amounted to a first attempt by Macron to mold his summit around issues that will divide Trump from other leaders.

On Sunday, Trump seemed to dispute an announcement from the French presidency that the leaders had all agreed for Macron to deliver a message to Iran on their behalf.

“You know who this is?” Trump asked reporters, gesturing toward Johnson, as the men descended a grand staircase at Trump’s hotel. “He’s going to be a fantastic prime minster.”

Later, over a meal of scrambled eggs and veal sausage, Trump acknowledged he was more aligned with Johnson than his predecessor in Downing Street, Theresa May.

“He needs no advice. He’s the right man for the job. I’ve been saying that for a long time. It didn’t make your predecessor happy,” Trump said.

“You’re on message there,” the enthusiastic prime minister replied.

In Johnson, Trump has at last found a leader of a major US ally with whom he is politically aligned, in style if not substance.

His breakfast meeting with the British Prime Minister was the highlight of the G7 agenda for Trump, who has been looking forward to finding a partner amid tensions with other nations over trade and foreign policy.

Together, Trump hopes he and Johnson can counter what he views as the left-leaning agendas of other European leaders, according to US administration officials. 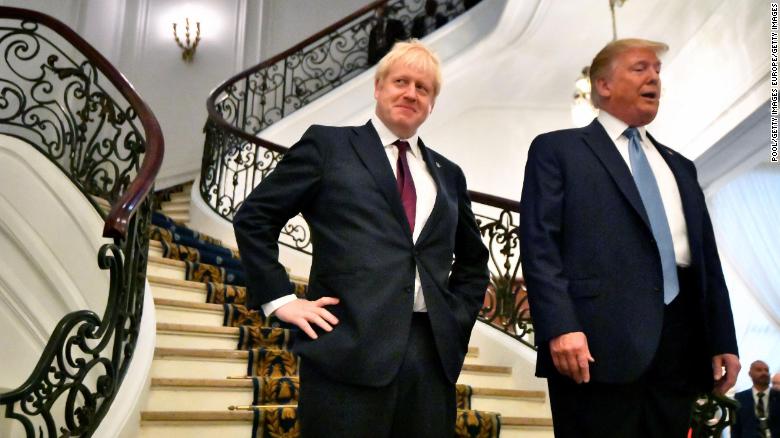 US President Donald Trump and Britain’s Prime Minister Boris Johnson arrive for a breakfast meeting during the G7 on Sunday.

Still, Trump remains deeply unpopular across Europe, including in the UK. And similarities in style don’t necessarily reflect deep policy agreements, except on the issue of Brexit.

That was in evidence Sunday as Trump claimed during his breakfast that he’d heard no complaints about the trade tiffs.

“I haven’t heard that. I think they respect the trade war. It has to happen,” Trump said.

Johnson was quick to correct him.

“Just to register a faint, sheeplike note of our view on the trade war: we’re in favor of trade peace on the whole,” he said. “We think that on the whole, the UK has profited massively in the last 200 years from free trade and that’s what we want to see. So, that’s what we’re keen to see. We don’t like tariffs on the whole.”

It was an early sign of what was to come at the G7: leaders nearly uniformly opposed to Trump’s tariff regime, which has been blamed for dragging down economies and throwing equity markets into turmoil. 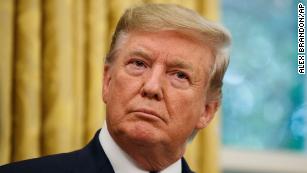 Trump sought to dispel the notion on Sunday that he was feuding with his G7 counterparts, despite their open differences on his use of tariffs or his environmental record.

“We are having very good meetings, the Leaders are getting along very well, and our Country, economically, is doing great – the talk of the world!” he wrote on Twitter.

Alongside Japanese PM Shinzo Abe, Trump said he’d been “treated beautifully” since his arrival in France.

That was the dinner with all the G7 leaders — so could write “But that ray of optimism was belied by a caught-on-camera moment from Johnson, who was overheard praising Macron for his handling of a “difficult” dinner with the US President and the other leaders the evening before.

“Bien joué,” he said, “well played. You did very well last night, my God. That was a difficult one. You did brilliantly.”

And the enthusiasm was undercut by complaints from US officials that the summit was being orchestrated by its French hosts to highlight issues that benefit the French president, Emmanuel Macron, and demonstrate Trump’s isolation.

“The G-7 is in danger of completely losing its way,” Trump’s chief economic adviser Larry Kudlow wrote in an op-ed in the Wall Street Journal as leaders were gathering at the elegant Biarritz resort. 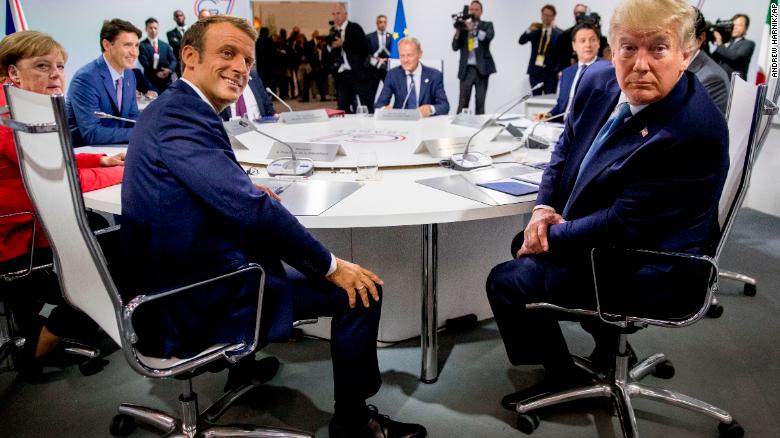 French President Macron and US President Trump at a G7 meeting on Sunday.

Other American officials traveling with the President said they believed Macron was intentionally adding sessions to the summit that are meant to pit Trump against his fellow leaders.

Trump himself had griped before the summit that like past gatherings, the G7 was overly focused on issues like plastics in the ocean and global women’s empowerment — and not the global economy, on which the organization was originally founded.

At the last minute, US officials added a Sunday morning session on the economy in an effort to realign the agenda. But Trump has viewed the added meeting as an opportunity to brag about the American economy — and his role in it — to nations where growth is slowing.

That’s unlikely to sit well with other leaders, most of whom blame Trump’s protracted trade war with China for weighing down their economies.