Dog’s nose cut open at Virginia PetSmart: ‘My dog was in pain, suffering’ 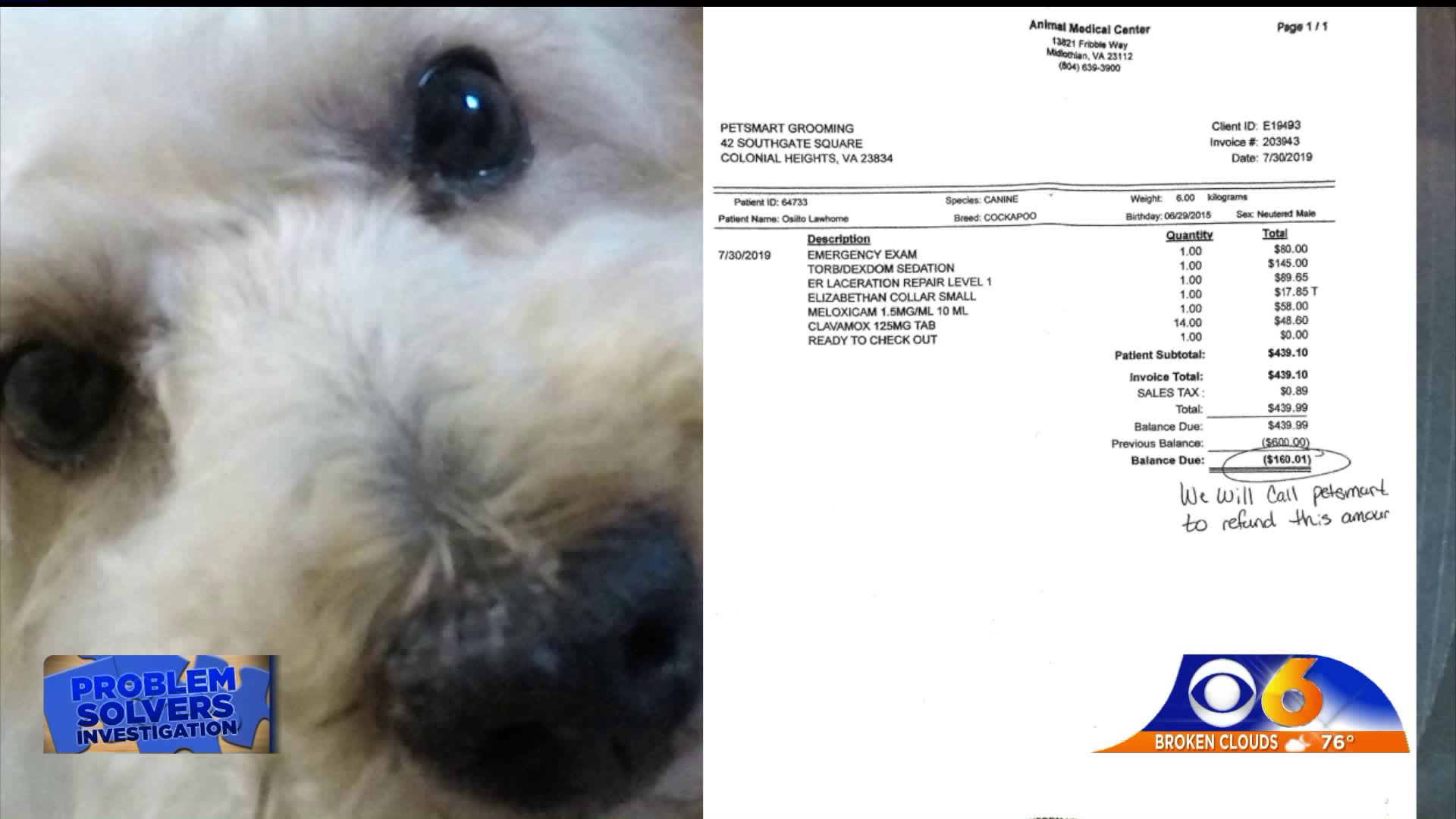 CHESTERFIELD COUNTY, Va. - A Virginia woman says her dog was delayed veterinary treatment after being injured at a local PetSmart.

Victoria Lawhorne says it happened July 30 while her pet was being groomed at the Petsmart in Chester.

“They called me and said my dog was rushed to the vet because he had got cut," Lawhorne told WTVR, “They said he was moving a tiny bit too much and accidentally cut his nose.”

She then met the PetSmart employees at the pet hospital, which is attached to the PetSmart. Upon arriving, the employees told her that "because they charge an arm and a leg here, we’re going to go to another vet and see what they say,” Lawhorne said.

“A piece of his nose was kind of missing and open up and like and you could see meat inside and blood," she said. "It was kind of like gross and nasty. I didn’t even want to look at it because it gave me chill bumps."

Lawhorne said Osito was transported to another vet 30 minutes north.

“My dog is hurt you should have taken him to the first vet you could have taken him to, no matter what the price is," Lawthorne said. "You guys injured him, so you guys should be responsible to pay and get him fixed as soon as possible, not wait four or five hours to figure out what vet you are going to take him to."

“From 4:30 til about 10:30, 11 o’clock my dog was in the vet because they decided to shop from vet to vet because one was more expensive than the other. That shouldn’t have happened.”

Vet records show Osito was sedated and surgical glue was used to repair his lacerated nose. He was sent home with medication and restrictions.

Victoria says PetSmart picked up the bill and offered her a gift card that she has not accepted.

“It’s more than an inconvenience,” Lawhorne said. “My dog was in pain, suffering. He wasn’t eating, and I don’t think just a $50 gift card could be okay. You guys haven’t checked on him, you guys won’t respond to any of calls or anything regarding the incident. You’re hurting somebody’s family. A dog’s pain and suffering; at least care a little more than what they are doing."

A Petsmart spokesperson gave this statement to WTVR:

“Osito’s nose was accidentally cut during a groom, and he was immediately taken to a local pet hospital by our associate where he was transferred to an emergency veterinarian to receive prompt treatment. The welfare of Osito was our top priority, and treatment costs were not a factor in how we sought care for him. PetSmart has reached out to the pet parent multiple times to check on Osito and offer continued support, but to date, the pet parent has not returned any calls. we are sorry this accident occurred, and we wish Osito a speedy recovery.”

Lawhorne maintains she has not heard from the pet store chain.

Osito’s nose is now almost fully healed, and he should be able to return to normal activity by the end of the week.

There are no formal requirements for pet groomers in Virginia. PetSmart’s website states it takes more than one year to become a certified pet stylist with the company.