Authorities say meth use on the rise West Michigan 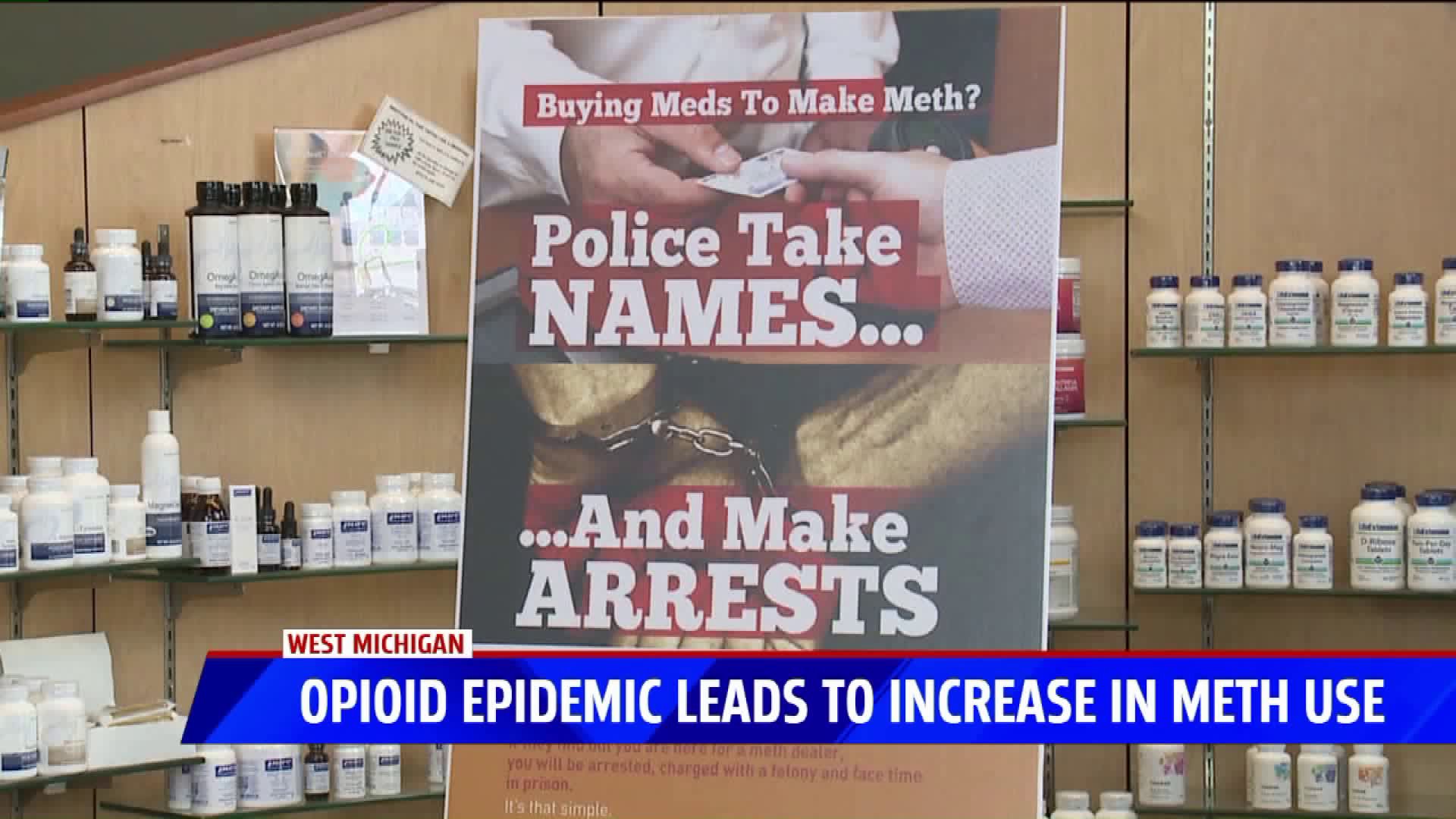 GRAND RAPIDS, Mich. — Law enforcement says that meth use is back up in West Michigan and they are warning people that assisting in the manufacturing of the drug could come with a five-year prison sentence.

Allergy Foundation of America Monday for a press conference outlining their concerns. Becker wants to educate the public on the laws against "smurfing".

"Smurfing" refers to people buying medications that contain pseudoephedrine for others that plan to use it to manufacture meth. Pseudoephedrine is an ingredient found in many common allergy medications.

Michigan residents are only allowed to purchase 9 grams of the drug every 30 days.

David Miller, the owner of Kestone Pharmacy, says this would equate to about twelve 30-count boxes of allergy medicine.

"You took what's now a valuable tool in our kit to help people from their suffering and we’ve turned it into something very dangerous. So we need control over that in order to prevent the production of meth," Miller says.

The press conference Monday also served to remind the public about protections already in place to halt meth production. The National Precursor Log Exchange (NPLEx), a computer system that tracks anyone buying Pseudoephedrine, was introduced in pharmacies in 2012.

If somebody has reached their 30-day limit, they will be blocked from buying more.

There were 64,000 purchases blocked in Michigan pharmacies in 2018 alone.

The prosecutor's office is worried for good reason.

According to Sgt. Joel Roon with the Kent County Sheriff's office, the trend is clear. Cases involving heroin are down, meth is taking their place.

"Heroin and the opiate crisis has kind of dominated a lot of our time and resources on the fight against drugs. There has been a shift towards meth," Roon said. “From the drug users themselves, we’ve heard them saying there is a healthy fear of heroin currently, and rightfully so.

"So, there has been kind of a move towards meth. While it's still physically very dangerous for your body, it is more difficult to overdose on.”

If you are caught "smurfing", you can be charged with a five-year felony.

Becker says, “if someone asks you to buy me four boxes of Sudafed for $50, bells should go off in the back of your head. You're going, 'woah, why don’t you do it, why can’t you go do it?' Because obviously they’re using it for nefarious purposes.”

Some allergy sufferers might be worried about the next time they need to go pick up some allergy medicine. Kathleen Slonager with the Asthma and Allergy Foundation of America says the system is set up to avoid causing issues for those with legitimate needs.

"I don’t get calls from people saying I couldn’t get enough of my allergy medication," she says.