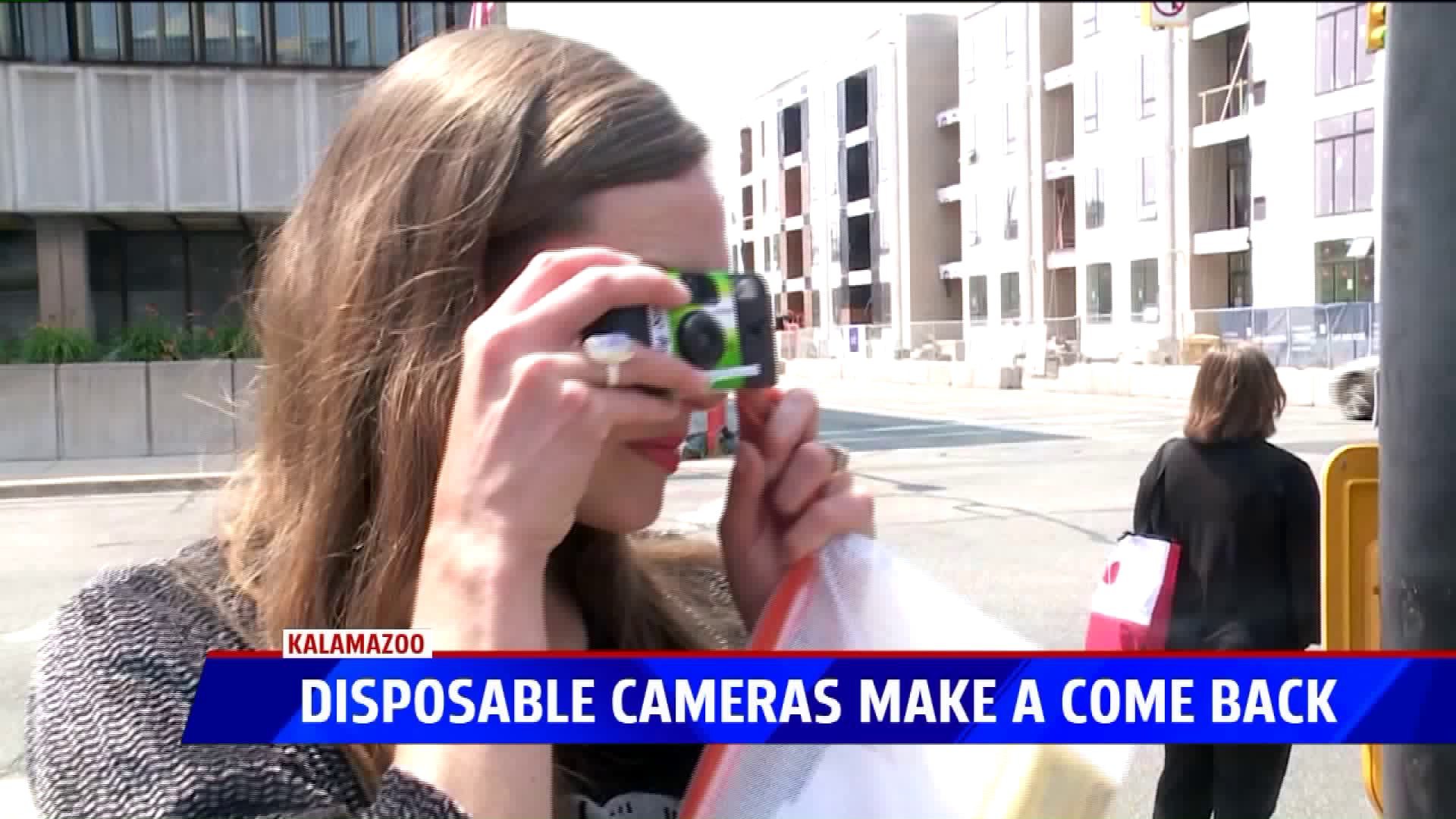 KALAMAZOO, Mich. — When Lille Forteau’s mom told her about the new public art photography project going on in downtown Kalamazoo, she immediately walked through Bronson Park with her father looking for one of the disposable cameras.

“Oh man, I just love the idea of the cameras around town,” Forteau said. “I’m an artist and I do poetry over at the Kalamazoo Institute for the Arts, so I thought ‘hey right before my class I’d come over look for a bunch of the cameras.'”

By Wednesday midday Lillie hadn’t found one, she said. However she was determined to participate in the new City Snaps project.

“Anyone walking by can engage in this project by grabbing a camera, snapping a picture of some of their favorite things in Kalamazoo or taking whatever spin they want on that,” said project coordinator Anna Lee Roeder. “It’s been extremely popular so far. People have been utilizing the cameras.”

Roeder said 25 cameras are actually in circulation and that they’ve been place throughout the city, from the Kalamazoo Mall to the Vine Neighborhood and Bronson Park. They’re placed in bags zip-tied to benches and street lights and a neon sign that explains what the project is all about.

“This is such an art-filled town and I feel like it so fitting to the city we live in,” Forteau said. “I feel like there are so many artists and so many opportunities that come with these cameras for sure.”

The city commission came up with the idea for the project a year ago, Roeder said. It’s funded through the Foundation for Excellence in response to input sessions, held throughout the city, hosted by Imagine Kalamazoo. Residents stated in those sessions that they’d like to see more community and public art in their neighborhoods.

City Snaps was their answer.

“We thought this method of collecting images would engage the widest number of Kalamazoo residents,” Roeder said. “We’re excited to see what the results are.”

Roeder said the project ends sometime next week. There’s no definitive date set. However, when it’s over, she expecting to sift through at least 400 photographs for the next phase of the project.

“We will have 10 utility boxes within the downtown geography, covered in the photographs residents have snapped,” Roeder said standing in front of a utility box wrapped in old pictures of the city. “So it’ll be collaged sort of similar to the first box that we see here.”

When Roeder went to the Kalamazoo Public Library Thursday afternoon, she picked up four cameras. She said that’s where people have been dropping them off in the dropbox and at the front desk once the roll of film is done.

However she kept an eye on the empty bags too.

“We will be restocking kind of soon to kind of keep this momentum going,” Roeder said. “But always check back to a station if you see that it’s empty because likely that means another community member is utilizing the camera at that time.”