(FOX 8)–Grumpy Cat, the Internet celebrity famous for her perpetual scowl, has passed away.

Her family posted the news on Twitter early Friday, saying “Grumpy encountered complications from a recent urinary tract infection that unfortunately became too tough for her to overcome.”

The post went on to say: “Besides being our baby, and a cherished member of the family, Grumpy Cat has helped millions of people smile all around the world, even when times were tough.” 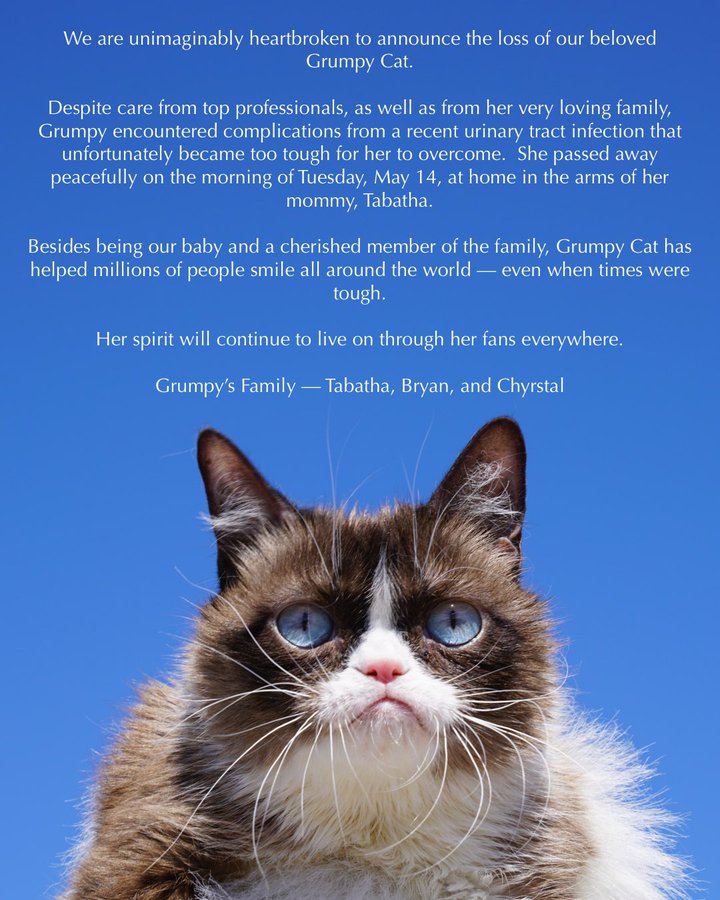 Some days are grumpier than others…

Her real name was Tardar Sauce.

The owner’s brother, Bryan Bundesen, made the cat famous by taking her photo and posting it on Reddit on Sept. 22, 2012, when the cat was only five months old. To dismiss rumors that the cat’s image had been manipulated, the owner posted videos of it on Youtube.

The cat’s perpetually frowning visage quickly became an Internet meme and is typically accompanied with phrases like “This is my happy face” or “If you’re happy and you know it, go to Hell.”

The owners claim, on their Grumpycat web site, that they don’t know the cat’s breed. They attributed her small size and perpetual scowl to “feline dwarfism.” But they make a point of saying she was not “bred purposefully” as a “munchkin cat.”

The cat owes its real name to a misspelling of the word “tartar” by the owner’s daughter, who believes the cat’s fur resembles the color of tartar sauce.