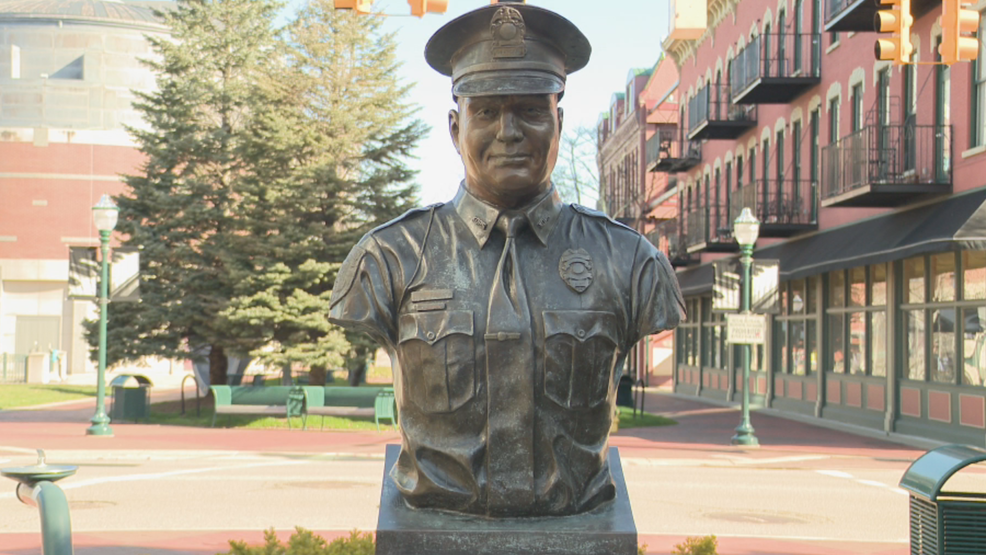 KALAMAZOO, Mich. — A Battle Creek man has been arrested for toppling a memorial statue dedicated to a Kalamazoo Department of Public Safety officer who died in the line of duty.

At 5:40 a.m. Sunday, it was discovered that the bronze statue of Eric Zapata at the Kalamazoo Mall in the city’s downtown area had been knocked over and cracked. The damaged memorial was discovered by the fallen officer’s son while he was on patrol.

Officers canvassed the area and located video surveillance from nearby businesses that showed a group of people near the memorial at 1:17 a.m.  Sunday. A man in the group posed briefly for pictures in front of the memorial before getting a running start and tipping over the statue.

The man was last seen running southbound on the Kalamazoo Mall. With help from nearby businesses, the suspect was identified as a 29-year-old Battle Creek man.

Officers located the suspect and arrested him for willful destruction of property, a felony punishable by a sentence of up to five years in prison.

“I do know many was involved in looking for the suspect,” Zapata’s mother, Connie Zapata Bernal, told FOX 17. “I like him or them to pay the damage on the bust. So many people help to build it in Eric’s honor and that’s what hurts.”

It was on the night of April 11, 2011, that Zapata, 35, was just about to get off work at midnight when he was sent to the 1400 block of Hays Park. An officer was shot and Zapata immediately went to the scene for assistance. Once he arrived, he began looking for a suspect, police later identified as Leonard Statler.

“Eric came through the houses and jumped a fence when he landed on his feet in the alley, that’s where he confronted his assailant,” said Jeff Hadley, who was the police chief then and recalling what happened that night. “He had no idea he (Statler) was standing there.”

Police said the suspect then opened fire and killed Zapata, a father of three. He later turned the gun on himself in the alley. Officers rushed Zapata to Bronson Hospital but it was too late.

Two years later, the bronze statue was dedicated in Zapata’s honor at the Kalamazoo Mall before a large crowd of family, friends and officers gathered there.

“We were saddened to learn of the vandalism to Eric’s bronze statue,” Zapata’s mother told FOX 17. “We do not want this to reflect badly on the Kalamazoo community, as they have been great to us.”

Kalamazoo Silent Observer is offering a $500 reward for the arrest and conviction of the person or persons responsible for the vandalism.

Tips may be submitted online at http://www.kalamazoosilentobserver.com or by calling (269) 342-2100.