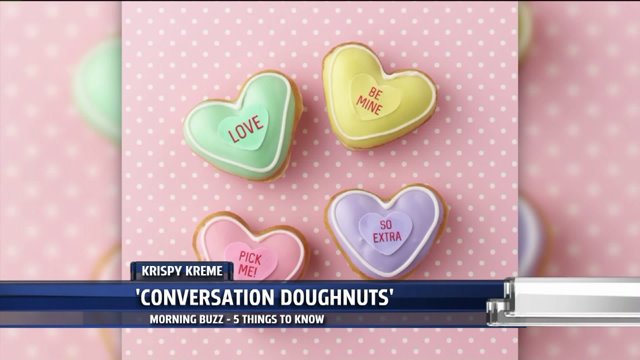 1. Governor Whitmer made a Sunday stop in Grand Rapids as part of a statewide meet and greet tour to kick off her governorship.

She made a pit stop at the Grand Rapids Public Museum while encouraging everyone to bring a book to donate to children in need. It was part of her initiative to help Michigan Public Schools, saying Michiganders should be appalled of our recent education reports.

She shared her goal as governor is to show the world real leadership isn't partisan, but will take the whole state coming together to solve problems.

2. An estimated 400 people are braving cold temperatures this weekend for the Muskegon Polar Plunge.

Members of the Muskegon County Sheriff Dive Team actually had to cut out a portion of the frozen lake to allow people to jump in the water.

The annual event happened Saturday at Fricano's on Muskegon Lake, raising money for Special Olympics of Michigan. They money allows free sports training for more than 20,000 children and adults with intellectual abilities.

3. One thing that doesn't freeze are postal rates, and they're going up again.

A first-class one-ounce mail letter now costs up to 55 cents. The nickel increase is the largest percentage hike since 1991, when postage increased from 25 to 29 cents.

Forever Stamps are also jumping to 55 cents, and priority mail prices are jumping 5.9 percent, making a small box that previously cost $7.20 to rise to $7.90.

4. Last week we told you the classic Valentine's Day treat, the candy conversation hearts, won't be available this year. But don't worry, Krispy Kreme has you covered with their new "Conversation Doughnuts."

The heart shaped donuts will have phrases written on them, like "Be Mine," "All The Feels," and "DM Me."

The doughnuts make their debut on Wednesday and are available until Valentine's Day.

5. You know what Todd likes even more than donuts? Bubble Wrap.

It's Bubble Wrap Appreciation Day! A 2012 survey found that one minute of popping bubbles in equal to the same stress relief you'd get from a 33-minute massage.

The holiday was created by two engineers in 1957. The original name for bubble wrap was "air cap" and it was marketed as a textured wallpaper.