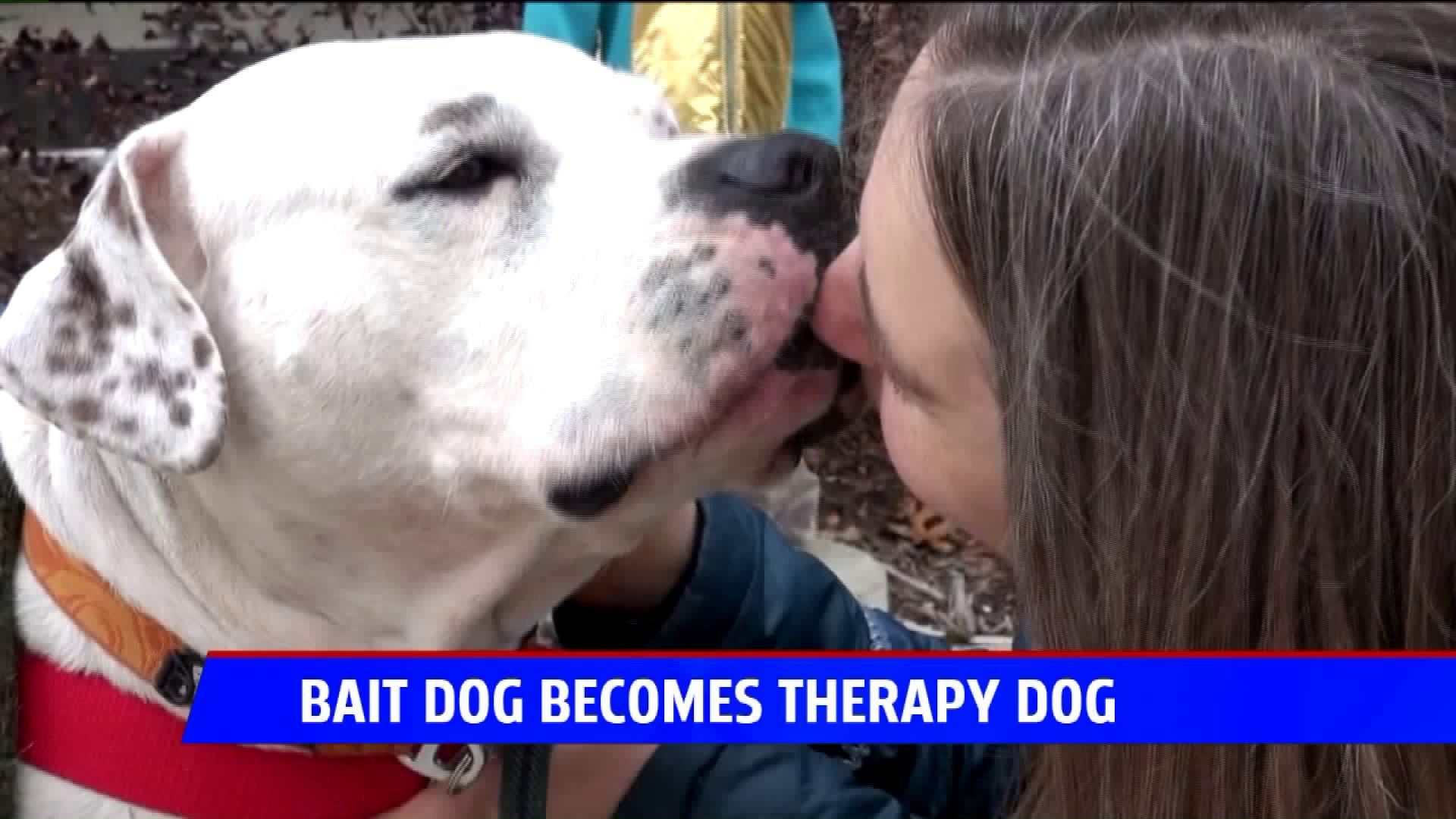 BATTLE CREEK, Mich. — Kristy Grimes admitted that she cuddles with her dog Jay a lot. She smiled while talking about Jay and rubbing her neck. She smothered her with kisses on her muzzle, asking for one in return. Within a second the American Bulldog licked her face.

“She is adorable,” Kristy said with awe. “I just can’t get over how loving she is.”

Jay has been affectionate toward Kristy, her husband and their three boys, she said. Her toddler freely sits next to Jay when they're at home. Her 6-year-old son William has especially taken to her considering she calms him down.

“Eventually she will be providing support for him, a stable presence in his life,” Kristy said. “My son has anxiety.”

He also has been diagnosed with ADHD and Sensory Processing Disorder, she said. Recently it’s gotten worse with the passing of the boys' grandmother in July. It was unexpected and her loss was painful.

“Right now is kind of a stressful, tough time for us,” Kristy said with tears in her eyes. “We knew we needed to do something because my son William, he’s the one the service dog is for, wasn’t doing good and we wanted a dog that would be with him no matter what happened.”

That's when they reached out to the Kalamazoo Animal Rescue. She said when they first saw Jay they fell in love with her picture on the pet finder group. Then when the Grimes picked her up, she knew immediately that Jay was a perfect match for her son.

“Jay pretty much knocked him over and licked his face,” Kristy said while laughing. “My son’s like ‘Yup, I like her. We’ll take her' and it was just her happiness.”

However, it wasn’t just Jay’s love that attracted the Grimes’ to her, she said. It was her story of survival too.

“She had been used as a bait dog in a fighting ring,” said Hilary Spala, a volunteer with the Animal Rescue. “When we found her she had residue from duct tape around her muzzle.”

Spala said that Jay had been taped up so that other dogs could train on her and attack  her. When they found her on September 11th she had sores all over body and was bald on her undercarriage from living on a cement floor.

“We found her on the side of the road with a broken weighted chain around her neck that she had clearly gotten lose from,” Spala said. “She actually broke the chain. It was a 10-pound weighted industrial strength chain collar around her neck.”

Immediately she was given medical and emotional attention, Spala said. They rehabbed her and Spala described her transformation as “amazing." Jay's fur grew in quickly and her scars disappeared. By early November, she was claimed.

“She was up for adoption and available for three weeks before the Grimes family had adopted her,” Spala said. “It was a fast turn around because she is so wonderful.”

Jay has been with the Grimes for over two weeks and is already in training to become William's therapy dog. Anytime she senses him getting anxious, she nudges him or lays  her head on him to destress him. Kristy believes Jay joined her family at the perfect time.

“She has had a rough beginning but she still has so much love and so much spirit,” Kristy said. “I want her to teach my son that even when stuff is scary, you can still live a full life that you can still be happy and loving and not tied-down by your fears all the time.”