PAW PAW, Mich. – Michigan State Police are renewing their calls for tips in identifying a woman found dead along I-196 in 1988.

The woman is known only as “196 Jane” and was found in October 1988 along I-196 in Van Buren County near the city of Covert.  Investigators say they believe she died sometime between April and August of 1988.

Police hope that new information may help with developing tips.  Investigators say the remains show signs of Osteopenia, which is a precursor to Osteoporosis.  They say Osteopenia shows up in younger women due to other reasons, like excessive alcohol consumption or smoking, eating disorders, long term steroid use, vitamin deficiencies and teenage pregnancy.  They say they believe “196 Jane” had given birth to at least one child.

The woman is described as being somewhere between 18 and 30 years old at the time of her death, but could have been anywhere from between 15 and 40. She was about five feet tall, weighed about 100 pounds and had brown/blonde hair.  They say she had good oral hygiene, but may not have been to the dentist for a few years before her death.

See below for artistic renderings. A case profile is available on the National Missing and Unidentified Persons System database. 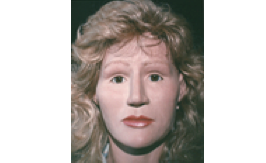 Anyone with information should call Michigan State Police at 269-657-5551.