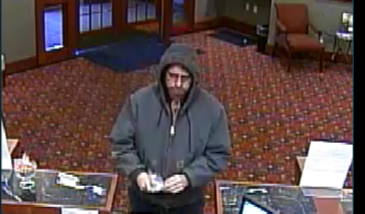 GRAND RAPIDS, Mich. — Police are investigating a bank robbery on the city’s northeast side at midday Saturday.

Shortly before 11 a.m. Saturday, police received a report of a robbery at the Macatawa Bank, located at 3177 Knapp St. NE.

The suspect passed a note to a teller, obtained cash and fled the scene in a dark car. No weapon was seen.

The Grand Rapids Police Department said that the suspect entered the bank, approached an employee and demanded money. The suspect then fled the bank after receiving an undisclosed amount of money.

The robbery suspect is described as a white male, approximately 6 feet tall with a thin build. The suspect was wearing a gray colored Carhartt hooded jacket. The suspect arrived in, and fled the scene in, what is believed to be a Kia Soul, possibly gray in color.