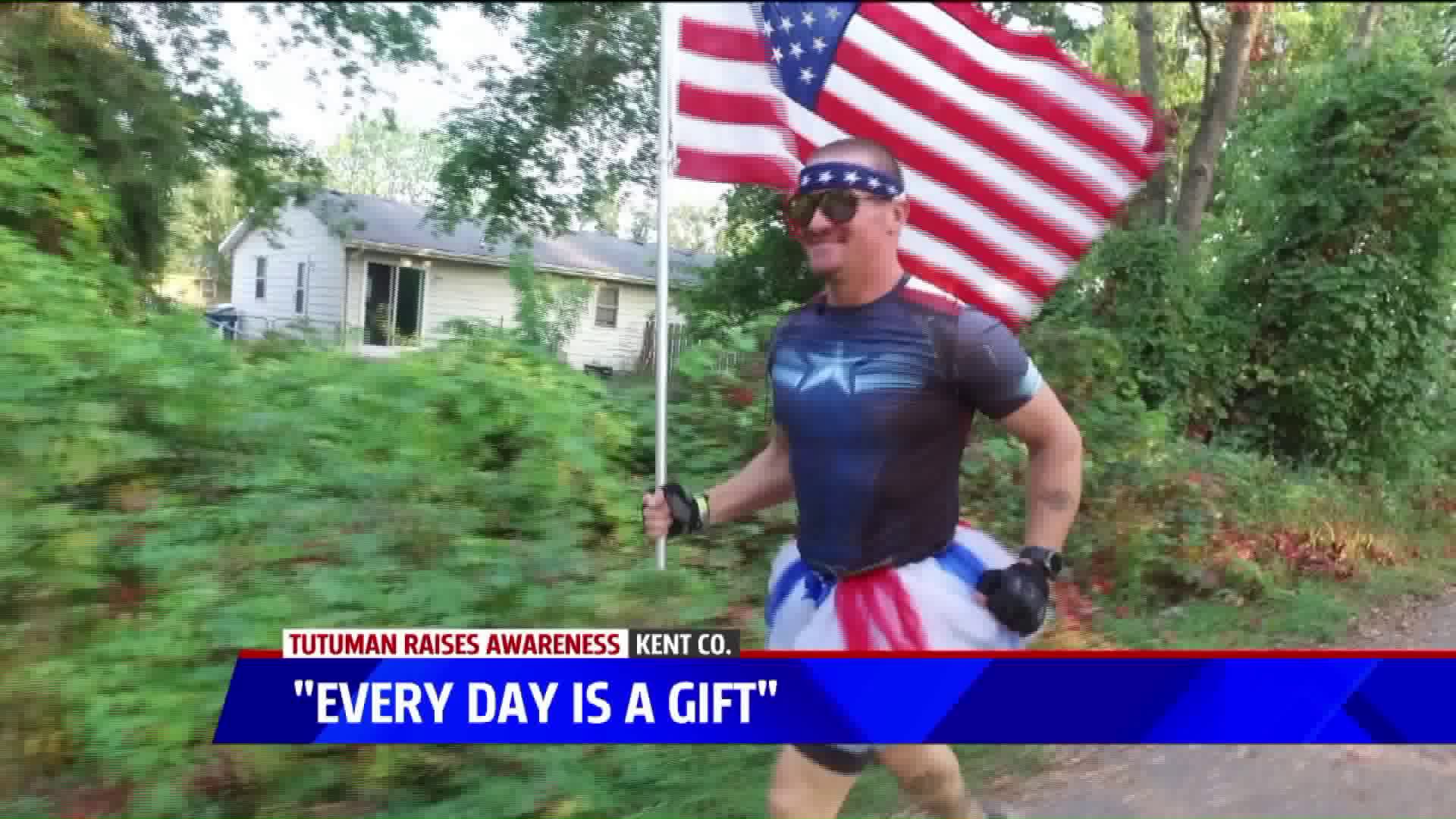 WYOMING, Mich. -- If you live in Kent County, you might've noticed him. He's a man who gets up early to run a few miles, but he does it while carrying an American flag and wearing a tutu.

At first glance, you might think he's a little nuts, and Robert Woldhuis will admit that he kind of is. He's an ultra runner, now training for a 50 mile race, but Fridays are what he calls 'Fly the Flag Friday' and it's getting a lot of attention.

Everyone has a favorite superhero. Some people might say Batman or Superman, but what about 'Tutuman?'

'Tutuman,' also known as Robert Woldhuis, can be seen running around Wyoming carrying the American flag and wearing a ballet skirt.

"People smiled and engaged with me as I was running by and I thought, you know what, something this simple brings a little bit of joy and a little bit of light into someone's life, then absolutely I'm all about doing it," said Woldhuis.

But there's a little more to it. Woldhuis is an Army veteran and is hoping to send a message by carrying the flag.

"The flag is a very important thing for me," said Woldhuis. "The carrying the flag on Fly the Flag Friday is just getting people that are busy with their lives and busy with everyday stuff to stop for just one second and realize that a lot of people have died for this flag. A lot of people have sacrificed so much for this flag and if they just see this for one second and they remember that, then it's worth it."

Woldhuis says he remembers why he carries the flag when it starts to get heavy.

"It's a good reminder of why I'm carrying it," said Woldhuis. "When it gets to where your arm is cramping up, it's just a good reminder that so many people have fought and died for this flag. I'm honored to carry it just so one person could possibly remember why we have this flag."

But what about the tutu?

"This is just about getting people to laugh, smile a little bit and have a good time and just be in the moment," said Woldhuis.

Woldhuis tells people to not take life too seriously and hopes people passing by will smile and laugh, because a decade ago life was very different for him.

"Ten years ago, my two oldest sons were killed in a car accident," said Woldhuis. "I kept it together for about a year or so and then after that I lost it and started self-medicating."

Woldhuis fell into a dark place, using drugs and eventually getting in trouble with the law.

"I decided I needed to get my life together," said Woldhuis. "I'm not honoring anybody's memory by doing the things that I'm doing. I'm not living to my full potential."

In 2010, it was running that helped turn his life around.

"Sobriety for me is very important and running goes hand and hand with that," said Woldhuis.

Now, he hopes to inspire others with his story and make one person think and maybe smile.

"Every day is a gift," said Woldhuis. "Just to be able to bring a little bit of joy and happiness into somebody's life at this point knowing where I was 10 years ago is a blessing to me."

Woldhuis runs every morning, but only carries the flag and wears a tutu on Fridays. If you want to see him, he runs around 6:30 every morning starting near 36th and Byron Center in Wyoming.